Manlius resident, who has ridden horses since childhood, is in charge of the annual NYS Fair Horse Show and many other horse shows around the country 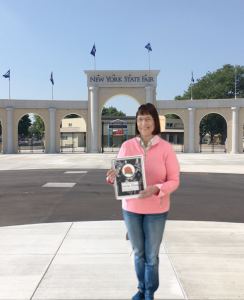 Though many of us have stopped in for an hour or two at the annual NYS Fair Horse Show, have you ever wondered how an event that runs for 17 days, with more than 1,200 horses and 25 different breeds and disciplines and with over 1,500 competitions, comes together?

It’s logical to assume there is a huge organization working year-round that keeps those action packed 17 days running smoothly.

Would you be surprised to know that the wizard behind the curtain is a petite, 76-year-old grandmother of three with a computer and 50 years of experience running horse shows?

Running the NYS Fair Horse Show this year from Aug.19 to Sept 2, means figuring out stabling for the 1,200 horses that come in and leave the fairgrounds on different days, ordering enough hay and shavings, hiring 40 people, including hiring and lodging out-of-town judges to prevent the perception of favoritism, enable the tracking of fees for riders entering multiple events, and ordering and awarding prizes.

“Having done this now for over 40 years and having run horse shows for every major breed association,” said Blumenthal, “I have developed rapport with so many different organizations, that for the fair itself, those relationships make things run smoothly, as we all know what we want to do and how it should be done.”

Sometimes she works for organizations or individuals running horse shows and sometimes she owns the dates and organizes her own shows.

The show at the fair includes the largest “draft horse show” in the United States east of Denver, Colo. — and the Denver show lasts for a month. “For this year, we are adding a Dressage Day before the fair itself opens,” she said.

As if this isn’t enough to organize for those 17 days, Blumenthal also runs the World of Horses Tent — an educational, interactive display that educates fair visitors about horses. “Adults and children can pet the horses and talk to the people who are there with them,” said Blumenthal. “Some years the New York State Troopers bring horses and exhibit as a precision drill team; they are a volunteer organization and own their own horses, so the troopers do this on their days off. It is very exciting and we hope to bring them back this year as the fairgoers love it. After the performance, they invite kids to come down to the arena rail and pet the horses.”

Blumenthal said she developed a passion for horses early on. “I rode horses as a child and at 14, I got my first show horse. I then got a mare, who had a baby, so I had three horses that I kept all through college. When I graduated, I taught in public school, while at the same time putting together the business of boarding horses at a farm in Oran [a hamlet the town of Pompey]. I had the first indoor, privately-owned arena ring in this area, so there could be activity all year round and I was running winter horse shows when no one else was. That’s how I got involved in horse show management.”

Blumenthal said later on during the summer she ran a show for the then-Syracuse Chamber of Commerce, which launched her name into the horse show business. “Subsequently, as other professionals around here were retiring, I was asked to take over the Professional Horseman’s Association show in the Syracuse area,” she said.

“In 1981 personal computers appeared and I brought the Apple 2 into the horse show offices. I knew what I wanted the program to accomplish and I worked with a friend who knew how to write the software that was needed. That was the first computerized program in the horse show world and it got me even more jobs,” said Blumenthal. “Then Horse Play magazine did a centerfold article on ‘The Computer in the Horse Show Office’ and that was how Apple learned about what I was doing.  They flew me to Texas to show them how I did what I did.”

At the same time, Blumenthal taught equestrian studies and equine business management at Cazenovia College for 27 years and coached the college’s equestrian team. “I traveled all over with the  team as well as taking students to Ireland and Great Britain to study the differences and similarities in the care of horses and experience cross country riding in the truest sense.”

She said horse shows in the area, aside from giving the public the opportunity to learn more about horses, brings a significant economic impact.

“The NYS Horse Breeders Association is in Syracuse for two weeks each year and as they are all from out of town, therefore they spend money on hotel rooms, three meals a day, and they love to go to Destiny to shop.  In May the National Intercollegiate Horse Show Association will rent 800 to 1,000 rooms and also spend money here.  Because horse people are not readily identifiable, unlike bowlers who wear bowling shirts, a restaurant can’t say, ‘boy, we did a great business from the horse show people this month’, so it has been difficult to convince our local economic development agencies that I need things like coupon books from restaurants that could help their members.”

On the personal side, Blumenthal’s daughter Shari (in the interest of full disclosure, Shari is my niece) and her husband Corey Schneider, have three boys and live in Scarsdale, Westchester County.  “No riders in that family,” said Blumenthal, “if it doesn’t involve a ball, they’re not doing it.”