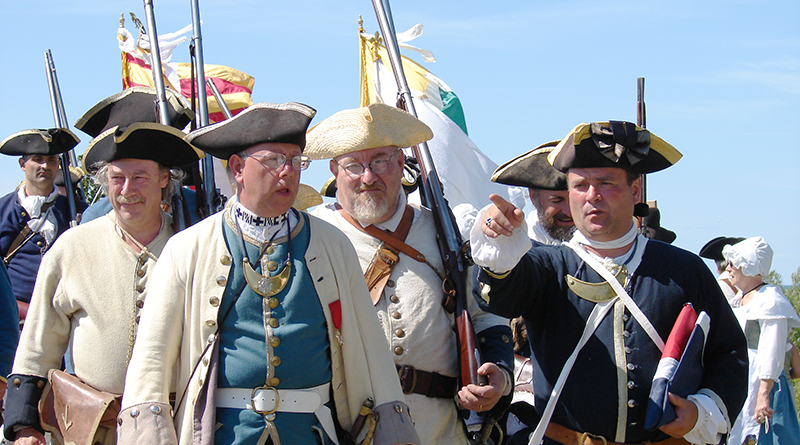 Countries have always tried to protect their land. Some built walls like the 5,500-mile Great Wall of China and 84-mile Hadrian’s Wall in England. Others built walls around their cities such Carcassonne in France and Dubrovnik in Croatia. When walls were not the solution, forts were built. New York state’s location on the Atlantic Ocean and with its many rivers made it vulnerable to attack so forts were built — an early version of Homeland Security. Today many of them are tourist attractions with frequent reenactments.

1. Fort Wadsworth: This Staten Island fort, one of the oldest military sites in America, was first fortified by the British in 1779. Its location, along with Fort Hamilton in Brooklyn, protected the Narrows. Today it is part of the two-state, three-borough Gateway National Recreation Area. When the fort was closed in 1994 it had been the longest active military site in the United States. Visitors can wander through the fort’s underground tunnels and enjoy the great views of the area from the overlook tower. The Coast Guard still uses some of the fort’s buildings.

2. Castle Clinton: The fortification is located in New York’s Battery Park and was constructed to defend New York Harbor from the British. The fort was completed in 1811 but the its 28 cannons were never fired. It has served many purposes over the years. It was an opera house, a theater, and even an aquarium — plus it was America’s first immigrant receiving center that welcoming 8.5 million immigrants until Ellis Island opened in 1892. It opened in 1975 as Clinton National Monument. Today, the site houses the ticket office for the Statue of Liberty.

3. Fort Hamilton: Located in Brooklyn, Fort Hamilton is NYC’s only remaining active-duty military post and the fourth oldest installation in the USA. During WWI and WWII it was the last stop for soldiers before being deployed overseas. People wishing to visit should check the Visitor Control Center on Fort Hamilton’s website for the procedure to follow.

4. Fort Ticonderoga. This fort has a beautiful setting in the Adirondacks just across the lake from Vermont. Control switched between the French and the British over the years because of its important location at the southern end of Lake Champlain. The most famous surrender came in the early morning hours of May 10, 1775 when Ethan Allen and his Green Mountain Boys snuck into the enemy fort while the entire garrison was sleeping. The fort’s commander wearing his nightshirt surrendered and the patriots took control of the fort without firing a shot.

5. Fort William Henry: A replica of the fort is located at the south end of Lake George. The British built the fort in 1755 to protect the colonies from the French. For more than 70 years they fought for control of the rich lands and fur trade. James Fenimore Cooper tells of the fort’s violent end in the “Last of the Mohicans.” During the summer there are daily guided tours, military demonstrations and battle reenactments. Docents relate the hardships and fears of life in the fort.

6. Old Stone Fort: Located in Schoharie, the fort was built as a Dutch Reform Church in 1772 but was fortified during the American Revolution. It was the site of a battle between hundreds of loyalists and Native Americans attempting to seize this strategic fort situated in what Washington called “The breadbasket of the American Revolution.” The siege in October of 1780 was unsuccessful and the old fort stood. It is now a museum complex with adjacent buildings that include a one-room schoolhouse and an 1830 law office.

7. Fort  Stanwix: Located in Rome, this star-shaped fort is called “the fort that never Surrendered.” It successfully held off the British in 1777, thwarting the British plan to conquer New York state, a critical component of their major plan to win the revolution. It was during this battle that, according to local legend, the American flag was first flown in battle. The first stars and stripes were created out of “a soldier’s white shirts, strips of fabric from a woman’s red petticoat and the blue straps from Captain Abraham Swartwout’s cloak.” A new multi-million dollar visitor’s center opened in 2005.

8. Fort Ontario: The star-shaped Fort Ontario, known as “The guardian of the northern frontier,” is just one of several fortifications in Oswego and the only one that has survived. Fort Oswego and Fort George did not. There were several versions on the site but the current one dates from the mid 1800s and was upgraded over the years. There are two guardhouses, a powder magazine, storehouse, enlisted men’s barracks, ramparts featuring magnificent views of Lake Ontario ,and underground stone casements and galleries to tour. During WWII the site was a “safe haven” for 982 European refugees.

9. Old Fort Niagara: Over the years the fort, located on the Niagara River in Youngstown, has been controlled by the French, British and Americans. To reflect this, national flags of the three countries are flown daily. There is an informative video plus a variety of demonstrations and tours. One of the most popular tours of the fort takes place in October. The Haunted Fort Tour is not to be missed, especially when the guide takes you up close to the old stone well where a headless soldier is reportedly waiting restlessly to return.

10. Fort Brewerton: located at the juncture of Oneida Lake and the Oneida River was an important fortification midway between Fort Stanwix and Oswego during the French and Indian Wars. There were many fortifications built over the years but most were destroyed such as Fort Clinton at West Point that was built to defend New York during the revolution. Today all that remains are some earthworks and stone base structures near West Point’s soccer fields. Carleton Island near Cape Vincent was once a base for British troops.