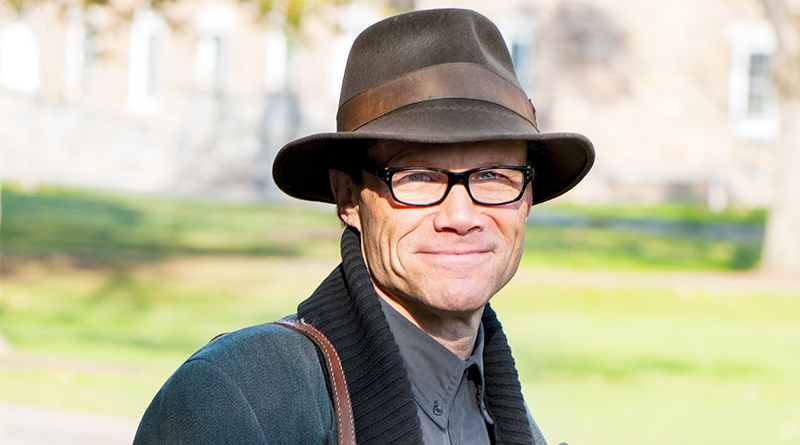 Hamilton College professor has spent a lot of time behind bars: helping inmates write their own stories. He now advocates for prison reform

Although Doran Larson is a highly-regarded writer and professor at Hamilton College, he has spent significant time behind bars.

He’s been inside minimum, medium and maximum security prisons in several states, and even overseas.

In recent years he dedicated semester breaks studying Scandinavian lockups and sharing his insight with the world. And while his knowledge of literature and talent for creative writing has fueled his success as a published author, he still prefers to read the work of inmates.

Many of the works he reads were completed by his previous students in the creative writing program Larson established at Attica State Prison in 2006, which eventually inspired hundreds of other inmates at various prisons across the country to take up creative writing.

Larson founded the American Prison Writing Archive in 2010. The idea began as a book of essays, but when the deadline for submissions passed and essays continued to come in, the college professor broadened the project into something much larger.

“I think we’ve created an important outlet for the incarcerated,” said Larson, 60, of Clinton, Oneida County. “I think some folks have a lot to say. This is a way for them to be heard, and I think there’s an audience for this.”

All told, the archive contains more than 1,600 essays and is growing daily. Its web page gets about 400 page visits per month.

As a youngster, the California native probably never imagined himself at either a state prison or a college campus. He grew up just outside of San Diego, in a blue collar community. His father was an air traffic control worker and his mother was a homemaker who spent ample time volunteering in her community. Larson and his two brothers enjoyed outdoors and scouting. As he got older, Larson got into competitive moto cross racing.

At 16, Larson discovered that he really enjoyed reading. The book that really inspired him at the time was a biography of Karl Marx.

“I started to believe that one could make their ways in the world by their ideals,” Larson said.

As a young adult, Larson initially had plans to work in construction and complete a training program for welders, but his love of literature, philosophy and the humanities inspired him to complete an undergraduate degree at University of California Santa Clara. From there, he earned a scholarship to complete graduate studies at the University at Buffalo.

“It was a huge change from what I was used to,” he said, “but it felt like it was time to leave California.”

At UB, Larson was granted ample opportunities to write and edit publications. When he started there, he was assigned the task of editing a student handbook. By his second year at the school, he was publishing fiction. After completing a Ph.D. at UB, Larson was hired to teach fiction at Hamilton College, a very prestigious liberal arts college near Utica.

Larson’s main focus was on teaching traditional literature and publishing his own creative writing. But all of that changed one day when he met people who did volunteer work in the state prison system, helping inmates to deal with their emotions and develop coping skills. The college professor wanted to witness this for himself, and accompanied them to Attica one day.

“I was so impressed with the honesty of the conversation,” Larson said. He figured that writing was another vehicle for the inmates to communicate their feelings and share their experiences, and he immediately volunteered to run a creative writing program at Attica.

All of the Attica inmates Larson has worked with are serving between 25 years and life sentences. Participants must have at least a GED, though many have completed traditional high school diplomas and some college courses. A few participants had master’s degrees, Larson said. Past participants have published books, one of them had a piece published in Esquire magazine, and another had one of his essays run in Harper’s magazine.

“There’s an enormous range in educational backgrounds,” he said, “but those who had less education were not necessarily the weakest writers. Either way, it takes an extremely strong person to write about their experiences.”

Some inmates participated in the program the entire time Larson ran it, from 2006 until 2016. Some regular participants, however, were relocated to other facilities after the escape of two inmates in Clinton County. The escaped inmates had help from a prison employee, and after reviewing the incident, state correction officials determined that stronger measures were needed to prevent inmates from establishing relationships with staff or volunteers.

While those policies frustrated Larson, it did not discourage him from continuing his work. By 2016, however, he found that he was spread too thin between his full-time jobs at Hamilton College and his repeated trips to Western New York for this volunteer work. He missed it tremendously.

“I developed some strong friendships,” Larson said. “Every time I left there, it reset my bearings. What I stress about is nothing compared to what those men are going through.”

As far as writing opportunities go, Larson did not abandon his mission. He established a college undergraduate college level course at Attica that’s still in place today. The invitation for essay submissions for the American Prison Writing Archive was extended to inmates across the nation. Prison employees and volunteers are also allowed to submit work. The only restriction is that the pieces must be non-fiction, either essays or testimonials. Poetry or fiction is not allowed.

Based on what he has learned about prisons and inmates who will spend the rest of their lives behind bars, Larson has become an advocate for prison reform. He believes American prisons are inhumane, that the penalties for many of the non-violent offenders are much too harsh, and that the United States’ system of corrections totally misses the mark in its stated mission to reform or rehabilitate its inmates.

“I would call it a crisis for the United States,” he says. “We’ve become dependent on a prison economy. I don’t think we should be locking people up because it creates jobs for communities.”

To put the American prison system in perspective, Larson visited correctional facilities in Europe — Holland, Poland, Iceland, Finland, Norway and Denmark. In a 2013 piece for The Atlantic, “Why Scandinavian Prisons Are Superior,” Larson endorses a system that allows its inmates to leave the correctional facility daily to work or study at universities, and return in the evening. The crimes of that incarcerated Finnish population ranges from murder to drug possession, and all of them were approaching their release date at the time of Larson’s visit.

Larson compared the cell blocks to college dorms, noting that the rooms had flat screen televisions, stereos and mini refrigerators. There is also a gym, a barbecue pit and a dining hall where the prison employees and inmates dine together. The prison labor wages there for those who chose to work range between $5.30 and $9.50 an hour. The inmates in Northern Europe typically wear their own clothes instead of orange jumpsuits, and the corrections officers don’t carry batons, handcuffs, Tasers or pepper spray. Some facilities allow inmates to leave the facility and visit relatives who live a long distance from the prison as long as they can be monitored electronically.

In addition, each inmate works with a “contact officer” on a personal level, with the officer helping the inmate to prepare for living a productive life after their sentence ends. Larson believes that this liberal policy works because Scandinavian criminal justice policy “rarely enters political debate.”

“Decisions about best practices are left to professionals in the field, who are often published criminologists and consult closely with academics. Sustaining the barrier between populist politics and results-based prison policy are media that don’t sensationalize crime—if they report it at all,” Larson wrote. “And all of this takes place in nations with established histories of consensual politics, relatively small and homogenous populations, and the best social service networks in the world, including the best public education. “

Larson acknowledges that many, if not most, victims of violent crime would disagree with his point of view, as would hundreds of his fellow Mohawk Valley residents who work at one of the local prisons or retired from a career there. He also says that while American prison reform is necessary, those who defend the nation’s current policies can make a case that, at least in the short-term, the Scandinavian corrections model would be impractical here.

“The problem is the scale — here everything is massive,” he said. “But you could begin to experiment with new ideas on a small scale.”

When he’s not teaching, writing or visiting prisons, Larson, who is married with two step children, enjoys watching movies, completing home renovation projects and swimming. He frequents the Hamilton College pool to stay in shape, but for him, nothing beats swimming in the Pacific Ocean in Southern California. At the time of the phone interview for this story, Larson was drying off after an afternoon dip near San Diego.

“There’s just something so special about this ocean to me,” he said. “It always feels great.”

Although he is a long-tenured college professor approaching retirement age, Larson is not even thinking of slowing down. He’s a leader in a unique academic field, and he feels his ideals can eventually drive change. Idealism is what turned him onto writing and literature in the first place, and compassion for the incarcerated is what has led him to take his career in a new direction.

“People have asked me why do I care and why should I care,” he said. “But I see this in the same way that some people care about the elderly, the handicapped or the environment.”