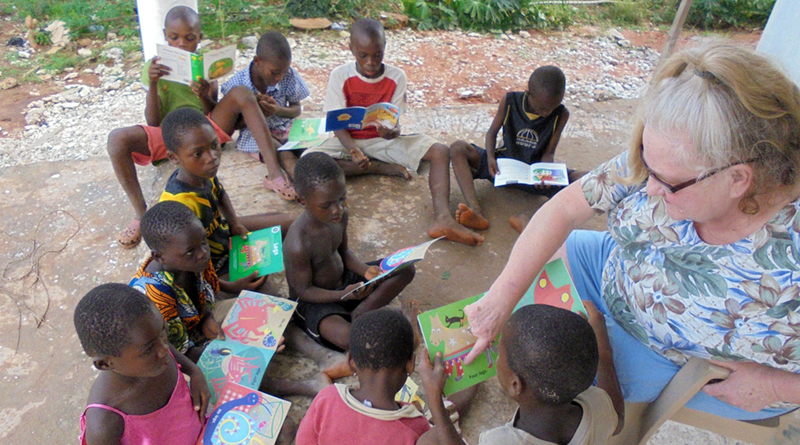 Over 38 years of marriage, Dawn La Flamm and her husband talked about their plans for later in life without giving much thought to what would happen if their golden years were cut short. So, when her husband succumbed to pancreatic cancer in a matter of months, La Flamm was lost.

Outgoing by nature, she withdrew. For a few years she went through the motions — going to church, shopping and running errands — without feeling like she was living, she says. Her family grew worried. One day she reached the realization that she’d been lucky in life.

“I’d never really wanted for anything,” La Flamm says. “So, I decided I wanted to know what it was like to be poor.”

She researched poor countries where English is spoken and settled on visiting Ghana, on the western coast of Africa, alone. Her sons were very concerned, she says, and all but one of her friends tried to talk her out of going. But her mind was made up and in 2011 she bought a plane ticket and flew to Ghana. 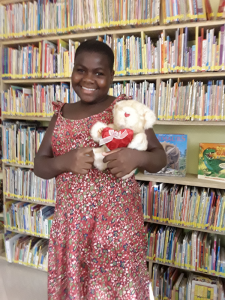 In Africa, she received a crash course in the culture and the idea of poverty as a way of life. She visited ancient castles used in the slave trade and toured several schools. A one-room schoolhouse in an especially remote area had a single teacher and no textbooks for 12 students, La Flamm says. The teacher taught lessons using chalk. The three-week trip gave her the kind of behind-the-scenes view of Ghana she was sure she wouldn’t have gotten with a church or tourist group. She knew she needed to go back.

“I decided I wanted to do something for poverty only I didn’t know what,” she says. “I had to do a lot of soul searching because many people said to me ‘We have people in need right here.’”

That was certainly true, La Flamm says, but the social safety nets in the United States are far better. And she reasoned that Americans have so much that if she could simply share some of the excess to help a child, it would be worth the effort.

But how could she make a difference? La Flamm wondered. On her first trip she’d been struck by the fact that the schools she visited had no libraries to speak of. The only books she saw were textbooks and reference books. La Flamm considered bringing some used books next time to read to children. Her 8-year-old granddaughter offered her books she’d already read. 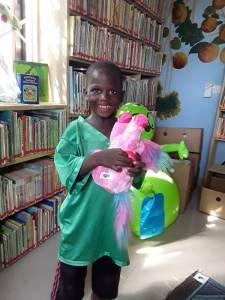 On another trip La Flamm decided to test the waters at a pizza shop. She sat outside reading and several children, who recognized her from visits to their school, walked up and sat down to listen to her read. Each afternoon children sat down and listened to La Flamm read a couple books. It occurred to La Flamm that the children hadn’t been exposed to the classic children’s literature that is ubiquitous in American childhood. These were children who hadn’t heard nursery rhymes. They’d never puzzled over whodunits with Encyclopedia Brown or the Hardy Boys. Even “Green Eggs and Ham” and “The Cat in the Hat” were out of reach.

By the time she left for home, about 20 children were gathering each day to listen to her read and she decided there was a need she could meet.

“I knew that was where I was supposed to be,” La Flamm says. “I can’t explain it.”

With the help of a man she befriended in Ghana, La Flamm set to work. In 2012, they secured a piece of land in a rural area near a village and had a well dug. The next year they broke ground on the building. The result was a 2,300-square-foot house with electricity and running water. Rose Villa Library opened in 2014. The house was split between the library and living space for a caretaker and for La Flamm when she visited. Even before it was finished, children began visiting. But initially the library was short on one crucial item: books. 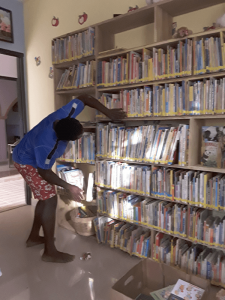 La Flamm had begun accepting used books for the library. Donations flooded her two-bedroom apartment in the village of Mexico. Books soon packed her spare bedroom so tightly she could barely open the door. But how could she get them to Ghana? She looked into mailing them and discovered it would cost a small fortune. And in the first couple years, only two of 24 boxes of books she mailed reached their destination without being opened or damaged.

So, each time she flew to Ghana, La Flamm packed 50 pounds of used books into each of her two suitcases. She says she managed to tote about a thousand books to Ghana that way. With help, she eventually found a way to ship dozens of boxes of books and school supplies.

After opening the library, La Flamm visited the local schools, introducing herself to the headmasters, bringing along free calendars and telling them about the library. The number of children visiting the library grew, but there was a problem.

“So, I have done this on my own, however after I got this built, made about eight or nine trips to Ghana, I ran out of money,” La Flamm says.

She estimates she spent about $100,000 on the building and other expenses. She was paying a caretaker to maintain the property and open the library six days a week. Now, after all the work, La Flamm didn’t know if she’d have enough to pay the help. It wasn’t until a close friend scolded La Flamm for not letting anyone help her that she finally came around to the idea of accepting help. She began taking donations.

With more support, the library began a bookmobile, delivering loads of books on loan to local schools. La Flamm knew supplying books and school supplies was helping. But she says she got hard proof when the number of children passing the English comprehension test in the local school soared 70 percent the year after getting access to the bookmobile.

Children still come every day to the library, which La Flamm says now boasts around 12,500 books; about 95 percent are used. The whole operation is more sustainable now, La Flamm says. For example, the caretaker keeps a garden on the property and raises chickens.

La Flamm, now 71, doesn’t know how long she can continue to make the 11-hour flight to Ghana, but says she plans to keep going as long as she’s able. She returned from an extended visit earlier this year. As for her odyssey — from feeling lost after losing her husband to finding purpose in Ghana and fighting to keep the library open — La Flamm says she doesn’t regret the journey.

“It’s been so exciting.”

To donate to Rose Villa Library