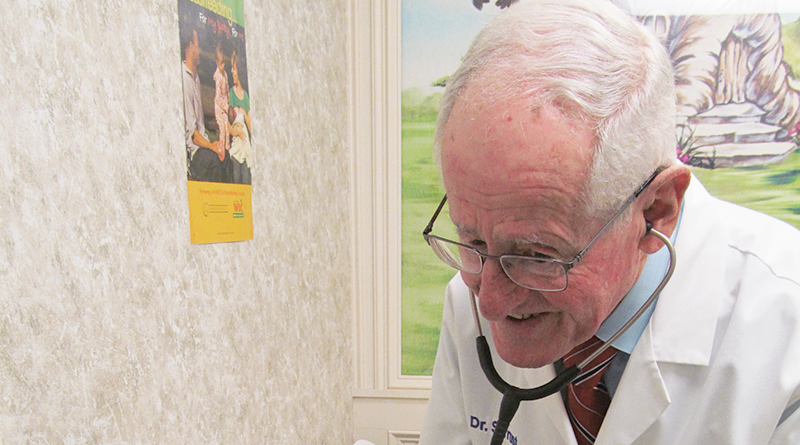 Pediatrician in Fulton still active at 80; Syracuse chiropractor, in her 70s, also sees patients on regular basis: “When you’re doing what you love, it’s not a job,” she says

While many in the health field retire early for a variety of reasons, some practitioners continue working long after the standard retirement age.

One of them is Stuart Trust, clinical professor of pediatrics at Upstate Golisano Children’s Hospital and a practicing pediatrician in Fulton. He has been practicing medicine since 1974, before many of the parents of his patients were born. And at age 80, he doesn’t see any reason to stop.

Trust had worked as a pharmacist for nine years and that introduction to medicine drew him to medical school at age 29. A lot has changed since he first began seeing patients. Back then, providers focused on infectious diseases, since it was before widespread immunization.

“With the success with immunizations and antibiotics, it shifted away from that morbidity and mortality and now we have the greatest number of deaths from car accidents, homicides, suicides and drug overdoses,” Trust said.

The shift in focus also means educating parents and patients about factors that can lower their risk of these concerns and more.

Though many of his peers have long since hung up their stethoscope, Trust loves what he does and feels, “I still have a lot to offer. I have four super associates, all pediatricians with far better education. I don’t have to work when I don’t want to. It’s not as physically demanding as it had been.”

His Fulton office is staffed adequately for him to enjoy traveling with Dorothy, his wife of 57 years, who worked as a stay-at-home mother and homemaker. Trust also likes reading his favorite genre, history.

Trust attributes his healthy longevity to leading a healthy lifestyle, which includes weight control, eating a balanced diet, abstaining from smoking or drinking, and always wearing his seatbelt. He said he has had a brush with cancer, but recovered well, partly because of his otherwise good health.

He also thinks that a positive outlook has helped him manage stress.

“I’m people-oriented and the farthest thing from depression,” he said.

He manages stress by walking his dachshund and not taking work home. For examples, he reads medical journals during his lunch break at work.

“My love is to take care of kids,” Trust said. “There’s never a day that I don’t get hugs, kisses and drawings from kids.”

Love for the job

Age hasn’t hampered chiropractor Joanne M. Verone, owner of Delphi Healing Arts Center in Syracuse. She received her degree in 1966, one of only a few women to become a chiropractor at the time. She became a licensed massage therapist in 1972.

“When you’re doing what you love, it’s not a job,” she said. “You’re just enjoying yourself. I’m so grateful I’ve been doing it all these years and I’m still healthy enough to do it.”

Not surprisingly, she offers this tip for health career longevity: receive massage.

“Some of my oldest clients were 104,” Verone said. “Another was 101. I used to go to their house because it was harder for them to get out.”

In addition to lifelong learning, she’s also a big believer in stretching, exercise and stress relief.

“Stress is a major factor,” she warned. “Know your limits. That’s the biggest thing I know for myself and that I teach people.”

Occasionally, she thinks about retiring, but she said her clients say, “’No, you can’t; Get whatever care you need because we want you,’” according to her.

Keys to Working Late in Life

Sharon Brangman, chief of geriatrics  and chief of the Center of Excellence for Alzheimer’s Disease at Upstate University Hospital, said that longevity of a health career depends upon a few factors.

“If you’re a surgeon, there’s a concern about natural changes that happen with aging that can make a surgical procedure more challenging, like changes in eyesight or dexterity,” Brangman said. “Sometimes, there are cognitive changes that occur.”

To remain effective in the health care world, providers must recognize and accommodate those changes or shift to roles where they can still effectively care for patients.

“Experience is an important factor,” Brangman said. “There’s an intersection between experience and current knowledge that has to be balanced. There’s no absolute age where that occurs.”