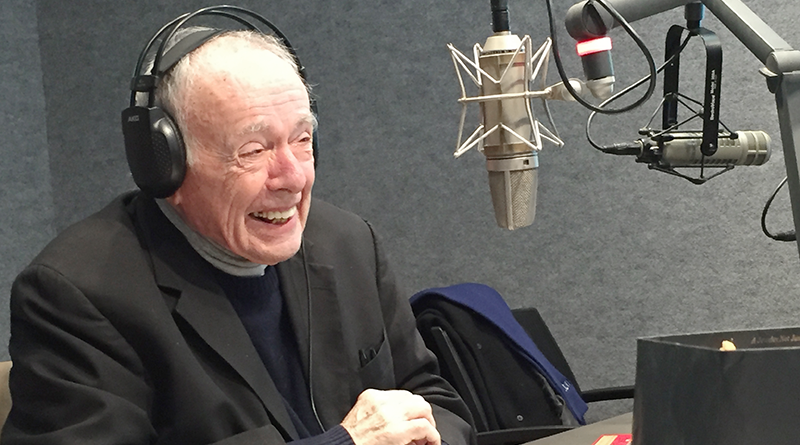 Legendary WCNY-FM DJ really knows how to jazz it up

It’s 12 degrees outside on a sunny mid-December morning. It’s one of those days that would keep the hardiest inside if they could help it. Don’t tell that to Leo Rayhill, who at age 89 is up and at ‘em at WCNY studios on West Fayette Street, Syracuse. He is used to the routine.

2016 marked 55 years on the air professionally for Rayhill, and to this day, he’s still guiding listeners through “The Sounds of Jazz” and “Classic Sinatra” on WCNY-FM.

When he got his start in radio as a student at Hamilton College, Harry Truman was president. The United Nations was in its infancy. “Rum and Coca Cola” by the Andrews Sisters was the song of the moment.

His interviews in the past read like a who’s who of 20th century jazz. Louis Armstrong. Eddie Condon. Rosemary Clooney. Stan Kenton. Count Basie. The list goes on.

He cites Armstrong as his favorite interview. “He came and apologized very nicely that he could only stay for a minute because they had him booked here and there,” he says. “And two hours later he is still talking! Everyone said it was the best interview I ever did and he did all of the talking!” he says. “He knew so much about everything. He was very well educated.”

His career as jazz aficionado extends far beyond the confines of a small radio station booth.

Jazz with a splash of vodka

Rayhill was in charge of promoting a Syracuse gig featuring the legendary jazz artist Condon. It was the night of the concert and Condon asked Rayhill how many tickets were sold. “We only sold 10!” he exclaimed. Rayhill seemed not to worry: “We’ll work it out.” When Rayhill pulled up to the concert hall, he saw a mob scene. “Police were out. Firemen were out,” he said. “Fans stood around the stage and it was a wonderful concert!”

Rayhill’s wife, Joan, offered to have Condon and his band come back to their house after the show. “Well, Eddie came back and after it all, we had six bottles of vodka that somehow disappeared!” he said.

Rayhill made sure to know his main subject well, too. Along with this wife, he saw Frank Sinatra plenty of times. He heard one night at the last minute that Sinatra was performing at Saratoga. They hopped in their car at the drop of a fedora hat and got back home after the concert: at three in the morning.

“He was great, a marvelous guy. So professional,” he said.

In a career marked by long nights, smoky nightclubs and missing vodka bottles, he still has no plans to slow down. He treks from Fayetteville every Tuesday to tape the shows at 8 a.m. The shows air every Sunday.

Rayhill remains a maestro in the studio, spreading out on the console a vast personal collection of CDs like he is standing at the conductor’s podium of a great orchestra. He selects the songs he wants in rapid pace, as if he were cueing with Leonard Bernstein’s baton.

Every tune has a story

He uses no script, has no notes and is ready with a story for each song. However, he can no longer do the show alone. With him at the audio board is Jim Aroune, the vice president of radio and television at WCNY and former long-time television news anchor in Rochester. Aroune jokes that he is the one to set Rayhill’s alarm to get him there every Tuesday.

The two work like a well-oiled machine. An Abbott and Costello. A Rooney and Garland. A Bing Crosby and Bob Hope. “Every week we work to create a show that hasn’t been heard before,” Aroune says. “And with his knowledge, experience and passion for it, we have an easy time. We throw the discs out and start laughing at each other.”

Unlike most modern radio shows that utilize digital files to play songs, Rayhill enters the studio solely with bags of compact discs.

“As you walk through his home, on every wall in every room, at least waist high, if not higher, there are rows and rows of CDs and albums,” Aroune says. “The only room that doesn’t have that music is his art room, his living room. It’s full of amazing art. When he gets ready for the show, he’ll take his walk to the back of his house, fills up his bags with CDs and that’s what we do.”

Aroune inserts the CDs, works the buttons and keeps the show’s time. But it’s Rayhill who remains the star. He hands the discs to Aroune and suggests which songs to play. When Aroune errs on a segment and has to start over, Rayhill cracks, “We’ve fired him six times but he always finds his way back.”

Both erupt in laughter, which fills the hour.

You’ll see Aroune gaze from time to time at the Internet for a fact or two about an obscure recording. Rayhill simply funnels through 60 years of jazz broadcasting to insert a bit of trivia. When you’re Rayhill, who needs Wikipedia?

“Do you want to talk this Vince Guaraldi piece up?” Aroune asks, increasing the volume in his voice to make sure Rayhill can hear him clearly. “Sure,” Rayhill exclaims. And with Aroune’s cue, the two casually launch into the next segment. Nary a script or Post-It Note in the area. “When you get a chance, see if you can get this in next,” Rayhill insists, with Aroune gladly obliging. “That’s a great one. That’s outta print!”

He brought a long resume to WCNY long before he decided to dedicate the rest of his life there beginning in the early 1970s. Rayhill got his professional start working at WQSR and continued on to WPAW and the legendary radio station WHEN. He spent nights taking in gigs at the old Dinkler Inn on James Street.

The former hotel, owned by Jim McCartney, Mac Cadaret and Mary Lou Glover, showcased the top jazz stars of the era. He wasn’t always quite ready to leave when the show was over. Not only because he’d miss the music. “I was afraid to walk down on James Street at night,” he jokes.

Rayhill’s life has not always been about jazz. It was the steady pounding of a jackhammer that provided his daytime soundtrack. For many years, Rayhill and his wife Joan owned a construction firm. What started out as a small operation between the two ended with a business with over 100 employees at the year-end Christmas party.

“I was very lucky. I retired with enough money to continue doing the jazz show,” he said.

OK, maybe most of his life has been about jazz. He continued, “My wife says the only reason I was in business was to buy records,” he said.

Believe it or not, he’s actually not that musical himself. He dabbled on the piano growing up but was no Vladimir Horowitz. For the nexus of his career, look no further than his father, Leo Rayhill Sr. He fondly remembers his father playing piano to near perfection. Rayhill Sr. sold them, too, and always demonstrated his merchandise for customers.

He’s not stuck in the era of his idol Glenn Miller, though. He loves Lady Gaga and the Canadian pianist Diana Krall. He’ll even play the young, up-and-coming artists on his show. “You oughta work this in too,” he says to Aroune. Rayhill encourages young people to continue to sing quality music, mainly because he’s ready to hear it. “He’s a young guy. This is his first Christmas album and it’s great!” he tells Aroune.

Now in a wheelchair, Rayhill exhibits no true signs of slowing down, even outside of his radio show. He remains an usher at Immaculate Conception Church in Fayetteville. “I got the job because no one else wanted it,” he cracks. “But I’ve enjoyed it and I’m still doing it. I came back from an illness last year and I was told the job was still mine.”
He has missed very little time on the air, save for that illness last year. “I enjoy this. It’s such a joy,” he says. Aroune jumps in: “Yeah, he’s not stopping.”

It’s time for the “Classic Sinatra” taping to end on this frigid December morning. Frank has crooned for the past hour on this special Christmas program. Aroune signals it’s time to go and signs off as Rayhill takes off his headphones and leans back in his wheelchair.

Moments later, the trumpet opening on Lionel Hampton’s “Gin for Christmas” can be heard through the studio.
Rayhill hands over the next CD to play on the “Sounds of Jazz,” which begins its taping for the next hour. His day isn’t over. Not by a long shot.

Josh Cradduck, the assignment supervisor at TWC News, originally wrote this story for the online newsletter published by the Syracuse Press Club.