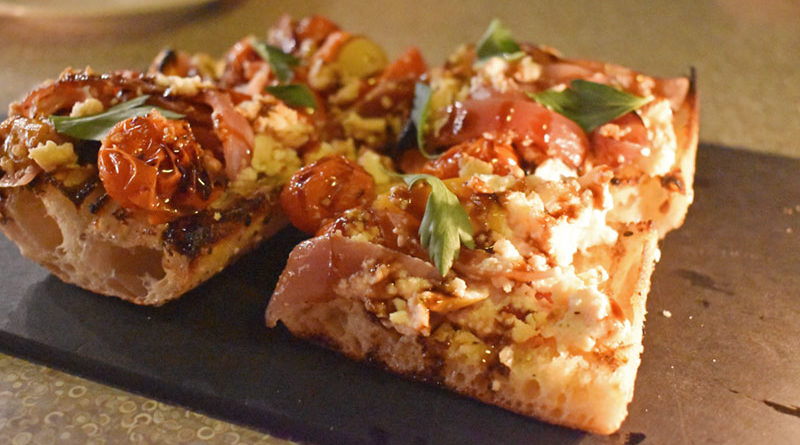 Coziness and carbs at the notable restaurant

I have a long personal history with Pastabilities, which is located at 311 S. Franklin St. in the Armory Square nook of Syracuse.

In terms of age, the 1982 restaurant is a year older than me. I’ve taken meditation classes with owner Karyn Korteling. Taking dates to the restaurant was similar to playing a favorite song on repeat and never getting sick of it. The venue also has always been a go-to, no-fail out-of-town visitor pleaser.

The always chic industrial aesthetic accented with glitzy mosaic artwork, hanging Edison lightbulbs, and panels with magnetic poetry is one of those all-weather eateries. In the summer, the outdoor seating in front and in back of the restaurant is in high demand. In the winter, the soft glow of the lights wave over cold patrons looking to warm up with a hot meal.

There’s always been a promise of consistent quality with Pastabilities’ food. All of the noodles are homemade. The stretch bread could be the best stretch bread in the nation. The hot tomato oil, which is served alongside stretch bread as a complimentary appetizer with every meal, cannot be beat.

Pastabilities’ hot tomato oil did reach a pinnacle of popularity years ago and this achievement was marked by the decision to mass produce the spicy dipping oil. Yes, I did notice a change in flavor after that shift. I probably said a curse word or two about the change. My (selfish) opinion was: This oil should be shared, but only in-house.

Is the oil bad? Nope. Despite not being its original self, the tomato oil has maintained the consistency since its stardom.

The meal was kicked off with the vegan bruschetta ($10). Served on toasted everything-style stretch bread, the four-piece dish features sweet peppers, red onion, tomatoes and vegan feta. After consuming bread and oil, it’s the best way to continue a meal with more carbs. The bruschetta is filled with flavor and some of the best roasted cherry tomatoes I’ve had.

Let’s start with the a la carte choices. The blackened chicken strips, despite a flavorful char, were a smidge on the dry side. The sprouts with garlic oil fell in that comfortable roasted middle, boasting a nice char but not burning them to a crisp. The portobello was the best of the three. There was so much flavor to the thick mushroom, thanks to the marinade. It wasn’t slimy but palatable.

The eggplant parm lasagna was top-notch. The lightly breaded eggplant sat comfortably between the perfectly cooked slabs of pasta. The bright red marinara sauce spoke for itself and didn’t rely on heavy Italian seasonings

The vegan dish was also something to note. The pink vodka cream sauce and Campanelle pasta could easily pass as non-vegan. As a proud omnivore, I would definitely order that. The vegan scallops, however, definitely did not taste like regular scallops. They weren’t horrible, but the fake seafood was heavier than the counterpart and had more of a pork consistency.

The potato and goat cheese ravioli came with a sweet, thin sauce and noticeable flavor paid notice to the sausage, pepperoncini and crumbled goat cheese. The filling of the ravioli was a pureed potato and goat cheese (presumably per the description — but I think it was simply potato) and was a delightful savory treat. The ravioli itself was lackluster. It wasn’t cooked well and was hard on the sides, where the pocket pastas were pinched.

Dessert came in the form of the banana toffee cheesecake ($8). It’s a cheesecake that doesn’t taste like a typical cheesecake. The two-layer soft treat had a base reminiscent of a banana cake. The light toffee drizzle and whipped cream were necessary roles for the production. The lightly salted pecans were the last “fab fourth” component.

The Irish cloud specialty coffee ($10) was a concoction of Bailey’s Irish Cream, Frangelico, espresso, and — you probably guessed it — steamed milk. It’s one of those coffee beverages that you need to be cognizant of savoring; otherwise, that cloud will dissipate through your gullet as fast as the evaporation of a water droplet hitting a hot stove. The hazelnut of the Frangelico played second fiddle — a noticeable contribution but not overpowering.

Before tip, the experience came to $108 on the nose for an appetizer and four entrees, plus an apreś-dinner treat and specialty coffee. That’s not too bad. After about 38 years going strong, congrats still goes to Pastabilities.

Photo: The vegan bruschetta ($10) at Pastabilities. It is filled with flavor and some of the best roasted cherry tomatoes I’ve had.