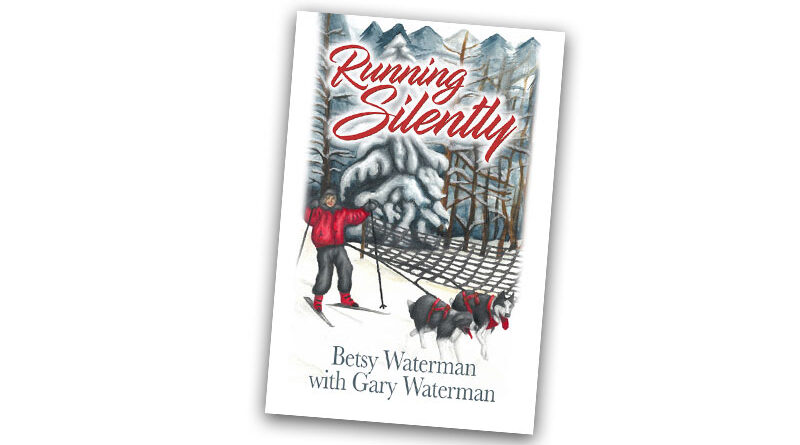 ‘Running Silently,’ a book about winter culture, winter sports and the joys and sorrows of owning dogs, reaches best seller status in Amazon’s category of ‘New Releases in Animal Care and Pet Essays’

Woman on skis. Huskies on harness. Snowpack. Speed. Put them all together and you have skijoring — cross-country skiing combined with sled dog racing and super-powered by dogs who “mush!”

“Running Silently,” by Betsy Waterman and her late husband Gary Waterman chronicles an exhilarating era in a marriage with a very full household of six huskies and border collies overflowing with heart, spirit, and personality. All those qualities and more emerge in the book with humor, suspense and fascinating characters of both the canine and human varieties.

Winter sports enthusiasts and dog lovers — or not — will enjoy “Running Silently.” Situated in the snowy New York North Country and Tug Hill region, it conveys a vivid sense of place, with engaging details about the local winter culture and the joys and — sometimes— sorrows of owning six big lovable dogs.

That the Watermans could turn their personal experiences into a universal story is more meaningful than it may at first appear.

Gary Waterman, a musician and very fit winter athlete, had not thought about writing a book at all. Then 20 years ago, he was diagnosed with an aggressive form of leukemia. The book was his therapy, Betsy recalls, “to escape the drudgery of his illness.” And so were the dogs.

Betsy — who lives in Sandy Creek, northern Oswego County — fondly remembers the day when she got three dogs past the nurses, so they could visit Gary in the hospital. A dog visit is not like a human visit — It’s about bounding up on the bed, furry nuzzling and lots of licking. And so goes the book: beyond Gary and Betsy’s outsized enthusiasm for animals, beyond the North Country towns, the caring neighbors, the dog trainers and the touring races, it is Gary and Betsy’s border collies and Siberian and Alaskan huskies who are the stars.

Completing half the book, Gary crafted lively details and imagery that belied his illness. For instance, he recounts a day when he and Betsy were walking 13 dogs because they were taking care of friends’ dogs in addition to theirs. Struggling to keep however many leashes untangled, he quipped, “Dogs, especially puppies, don’t always travel in a straight line. It was a walking border collie kaleidoscope!”

Respect and affection for dogs fills every page. Of huskies, Gary wrote, “You can just see their joy for life, their mountainous energy, their power, and best of all, their ‘I’m so glad you came to visit me’- ness.” Of their sled races: “There is just something about being connected to and working with dogs … It’s the bond that develops. To see them pulling their little hearts out for you is uplifting.”

And pull they did, intelligently, intuitively. In the part of the book that Betsy completed, she writes of occasionally racing on skis and shouting a command to go left when she had meant to say right. On more than one occasion, her border collie Casper flicked a look over his shoulder when this happened, discerned her body language, and then shifted right.

Gary lost his battle with leukemia and died in the summer of 2000. Betsy put his uncompleted book away, unable to think about it for years. Finally in 2017, she felt emotionally ready to revisit their 33-year marriage.

Gary and Betsy met when they were in high school, though different ones: Betsy at Weedsport, Gary at Port Byron.

The two of them met on a bus for an inter-school trip to the United Nations in New York City. They married barely out of their teens, and throughout the ensuing years, Betsy earned master’s and Ph.D. degrees, becoming a psychologist and a college professor. Gary was a musician who worked as a buyer for Onondaga Music and later in life re-trained to be a massage therapist, which afforded him more flexible work time and spare time to be with Betsy and pursue their many interests together again.

“I was always more the outdoors person,” Betsy remarks. “I had to drag him kickin’ and screamin’. Once he got started in anything though, he was interested in perfecting, taking lessons, competing.”

In “Running Silently,” Gary was indeed the competitive skier who wanted to perfect the faster and the longer, while Betsy was into more leisurely, short-distance outings. That ended, though, the day she took Leo, their border collie, out with her and clipped a leash onto his collar so she could hold on to him while she was skiing. “He just took off!” she says. Suddenly, she realized, “I kind of enjoy speed.”

That got Betsy and Gary thinking about more comfortable harness equipment for the dog — and then dogs in the plural; Betsy had as many as three dogs pull her, but usually went with two. She and Gary did not actually know that what Betsy was doing was a real sport, until one day another woman saw her on a trail and exclaimed, “You’re skijoring!”

It was a revelation. Gary and Betsy looked it up. Gary bought her a book. They discovered that all kinds of equipment exist expressly for skijoring!

From there, the couple’s quest for the dogs to do the job unfolds, with Gary’s vivid characterizations of dog owners and trainers who sold dogs, intuitive first meetings with dogs before making a buying decision, and life as owners of what was basically a lot of dogs, all with their own personalities, loyalties and conflicts.

Gary and Betsy really draw the reader in. Drama builds around veterinarian visits for strange maladies and wounds. Bayley, their beloved adventurous border collie, was shot on two separate occasions by unknown parties! And there is more than enough suspense every time one of the dogs runs off, as dogs will, and their owners search madly. One particularly fascinating incident involves an entire sled team of 10 dogs which cuts loose and runs off, disappearing in a heavily forested area while still harnessed together. Read the book to find out how that one ends!

Although Gary had written extensive notes for his draft, and Betsy was able to follow those notes, she faced her own dilemmas about how to pick up where Gary left off. Certainly she had practical considerations about voice and structure, but even more, she had to face the memories. At first, “It was a fresh loss,” she says. “When I was writing sometimes I cried but then it was also a joy to write.” She pushed on because she intended the book as a permanent record for their five children. What she had not anticipated was the effect on Gary’s nine grandchildren, many of whom were too young when he died to remember him. “One of my sons and his family reads a part of it as a family every night.” Betsy’s granddaughter Lauren created the colorful drawing for the cover, giving Betsy the very red jacket that Betsy always wore in those days. Another granddaughter who is 15 is writing her school book report on it.

Now in publication, the book has become Amazon’s best seller in the category of “New Releases in Animal Care and Pet Essays.”

Betsy’s own words, though, about a story both complete and alive, would be a more apt category. “It is genuineness and humanness!”