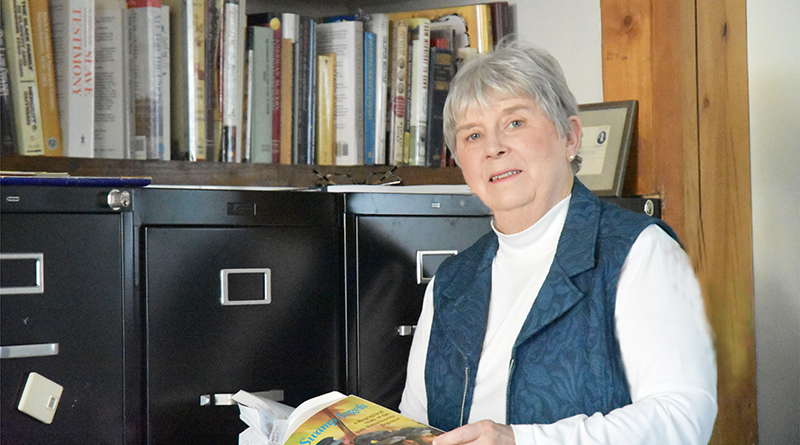 All history is local,” according to Marjory Allen Perez — and she would know.

As historian and author for more than 45 years, Perez has examined the broad sweep of the Civil War, slavery, and 19th century African-American migration from the perspective of its personal impact on Upstate New York region.

Her latest book — “Freedom: A Shared Sacrifice! New York’s African-American Civil War Soldiers” — is a meticulously-researched history of the local men who served in black regiments and the families who waited at home.

“You can tell the bigger stories through the smaller stories,” says Perez — and she does just that, through the stories of freed slaves and escaped slaves who settled in towns like Sodus Bay, Canandaigua, Camillus and Syracuse and took up the struggle between the Union and the Confederacy.

For Perez, the people and history of Upstate New York have been a lifelong pursuit. She grew up in Oswego and attended undergraduate school at Buffalo State and graduate school at Oswego State, where she earned an Master of Arts degree in history. Prior to graduate school, she taught history in grade school in Union Springs and in the North Syracuse School District. After completing her master’s degree, Perez was hired to be Wayne County’s historian.

It was during that time, working with historical data and records each day — and interacting with Wayne County citizens, including schoolchildren — that her passion for presenting and publishing historical material really took hold.

Her knowledge of local events grew as she did promotions for Wayne County’s sesquicentennial, coordinating school and community events like the “History Jubilee” and the “History Bowl” quiz game for children. Perez was also one of a committee of co-authors who put together a book for grade school children titled “Looking Back” for which she uncovered even more information that piqued her curiosity about the diversity of groups who called Upstate New York home, like the Erie Canal workers, the Native American population, and the Mormons, among others.

It was also during that time that she met her husband. Being at a loss for how to put together an eye-catching brochure for sesquicentennial events, she called in a young graphic artist named George Perez, whom she later married. Over the years, he has been her greatest fan. They continue to be a team, as George creates the graphics for the covers of the books she writes. It was he who came up with the title for “Freedom: A Shared Sacrifice.” For the cover of “Freedom: A Shared Sacrifice,” George combined a photo he took at Beaufort National Cemetery in South Carolina, with an overlay of an African-American soldier, in muted colors which evoke, to this reader, a past rediscovered.

One day at a history celebration for the Wayne County, a child asked Perez, “Were there any black people here before the Civil War?” At that moment, as Perez describes it, she knew she had to “tell the stories that have not been told.”

In full historian methodical mode, she determined to dig into all available research on the African-American population in early New York. In frequent visits to Washington D.C. to visit her son, she spent days on end in the National Archives, digging through reports of pension files, military movements, news articles and old letters. Concentrating on original documents from the pre-Civil War and Civil War period, she found herself working on two different strands, the Underground Railroad and the Civil War’s black regiments. In fact, Perez worked on two books at one time. She wrote four essays which would become chapters for “Freedom: A Shared Sacrifice,” and then put the project on hold while she completed what would be her first published book: “Final Stop, Freedom!” about the Underground Railroad Experience in Wayne County.

Created with material from her many presentations and programs as county historian, Perez’s “Final Stop: Freedom” divides the Underground Railroad experience into eras that cover the oppression of slavery, the escape to freedom and the reestablishment of new lives in the north. Each era is illustrated with old photos and personal stories from the African-American communities of the time, gleaned from original letters, news articles, and autobiographies.

Having a book published gave Perez renewed confidence. “The fact that I could do it and finish gave me the courage to go on with the book about the soldiers,” Perez said. By that time, the National Archives had digitized its documents for online access, so Perez found she could order materials and review primary research at home rather than in Washington. From the considerable data and records she examined, Perez identified 500 members of black regiments, African-Americans from Upstate New York who had either enlisted or been drafted. In “Freedom: A Shared Sacrifice”, she brings them to life with names, hometowns, occupations, wives and children, mothers and fathers, even uncles and nephews who also fought.

“I wanted people to care,” Perez said. Thus compelled, she set out to describe the contributions these soldiers made — and the losses they suffered. One such story is that of Benjamin Jupiter, an Ontario County resident from a “close-knit family that had lived in the area for 40 years.” Jupiter’s military service took him to South Carolina, where he got sick but recovered and was promoted to chief nurse and assistant steward at the regimental hospital. Unfortunately, other members of his family did not fare as well. His younger brother died of disease in the army, and his nephew was killed in action in Darbytown, Vt. Much more of Jupiter’s life story is recounted through letters to pension examiners from his wife and from a friend in neighboring Geneva. Another story is that of Thomas Riggs, who lived in Canada, crossed the Niagara River to Buffalo in 1863 looking for work, and enlisted in the 54th Massachusetts Regiment. Unfortunately, Riggs died in the Battle of Wagner; however, the reader gains a glimpse into his family, particularly his mother, in the records and letters that Perez discovered.

Why is it that these stories of Benjamin Jupiter, Thomas Riggs, and the many other soldiers and families about whom Perez writes have a compelling appeal beyond Upstate New York? “This experience was replicated everywhere,” Perez said, noting that these are universal stories of migration, military struggle, and re-establishing lives. For Perez, those life-changing experiences embodied the “shared sacrifice” of her title, and her book helps readers to understand that “the shared sacrifice of white and black soldiers, of men and their families” happened very close to home.