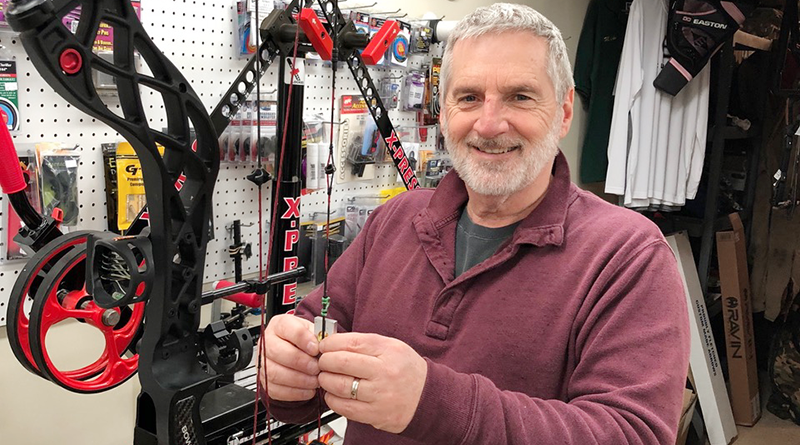 Archery instructor hones marksmanship skills of many in the area

Mike Fitzgerald took a shot at archery in the 1980s, and now some 30 years later, he’s hitting the target with the next generation.

He created a youth archery program at the Clay Sportsman’s Club in 1991, shortly after he was sworn into the club, and he’s been running it for the past 27 years.

In addition to being the operations manager at Southern Graphics Systems in Phoenix, he also runs an archery shop, Fitz’s Archery, in Central Square.

He opened his first shop in 1983, and while he’s moved around a little since then — New York, Pennsylvania, Virginia and back to New York — he’s always owned and run his archery shop.

While working in the Saratoga area, the 63-year-old took up the sport when a former co-worker let him try his bow.

And so, for more than a quarter century, he has been passing his love and knowledge of the sport to younger generations.

When he started the youth program, he said, there were only about six in the program, including his son and daughter, Mike and Amanda Fitzgerald. His son would go on to become a three-time New York state indoor champion. His daughter finished second in one.

“Most of this class is word of mouth,” he said, “but obviously the movie ‘Hunger Games’ brought out the initial influx of females into shooting archery.”

The interest is being seen nationwide as well.

According to an online article on NPR.com, a year after the 2012 release of “Hunger Games,” with its female lead, Katniss Everdeen, the overall membership in USA Archery had doubled.

The class gathers for 12 Sunday mornings from January through March, with Fitzgerald and two other instructors leading the classes.

In the club’s basement area where the sessions are held, bows of various sizes hang over the shooting line. Picnic tables line one wall, providing seating for parents, while targets line the far wall.

On the last day of the session, animal targets are scattered around the floor and serve as some of the kids’ favorites, Fitzgerald noted.

There is also a banquet to round out the season, in which everyone gets a prize.

“We work with them on safety issues, shooting skills, everything from shot execution to sight picture. These kids have come a long way,” he said.

When the kids start, Fitzgerald explained, they often want to loft and shoot — meaning to just load an arrow and shoot the bow. There is a skill to be accurate and being safe and that’s what Fitzgerald teaches.

To keep them focused and instruct them to achieve a level of accuracy, Fitzgerald brings a little “pop” into the game.

Balloons are blown up and used as targets, and the kids love popping the balloons.

They begin at 10 yards and will advance to 20 yards.

“The kids that have been here a few years are starting to keep score,” Fitzgerald said. “They’re looking at their progression and their achievements.”

Fitzgerald also oversees a co-ed league on Friday evenings, from January through March, male/female teams. Husband-wife, father-daughter and mother-son teams. Fitzgerald’s wife, Karen is his partner. She joined his love for archery in 1985.

“It’s a nice, family-oriented shooting environment,” he said of the co-ed teams.

The kids get a sense of personal satisfaction, confidence, and improved eye-hand coordination, Fitzgerald noted.

“Everybody gets satisfied when they hit the bull’s-eye, even me,” he said with a chuckle.

But Fitzgerald isn’t the only one to derive pleasure from the program.

Nine-year-old Mavrick Breckheimer has been shooting for about three years since his mother, Erika, first learned of the class through a co-worker.

He took right to it, she said, and it has helped the youngster improve focus and patience. For Breckheime the balloon popping is one of his favorites.

Tammy Lytle was looking for an activity that her daughter, Larkin, 10, could participate in that best suited her.

Archery has hit that mark.

While neither she nor her husband shoot, Tammy’s dad, Ken Stuber does. So an added benefit is that the sport has allowed for greater bonding between Larkin and her grandfather, Lytle said.

Larkin and her “poppy” may soon progress to the Friday night co-ed team.

For Larkin, the most immediate thrill is winning the $1 that’s rewarded after a certain target is hit, and she already won at least $1 this season.

For Fitzgerald, being able to offer these classes provides him with a great deal of satisfaction.

“It’s enjoyable to watch them when these kids’ eyes open up bright, when they see that arrow hit that target,” Fitzgerald said.