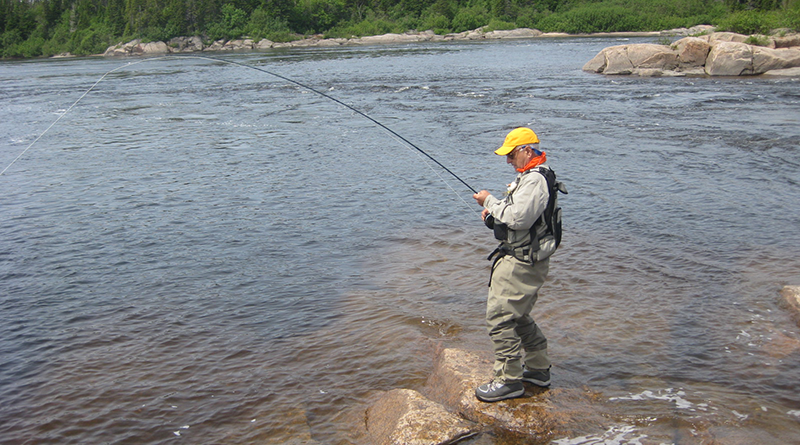 Not your typical Disney vacation: Taking on the challenges of salmon fishing in remote waters can be exhilarating

Having recently returned from a bush plane adventure with two similar-minded friends to the far reaches of Quebec, Canada, I can tell you for certain: Travel affords learning opportunities not found staying at home.

For Canadian pilot Keith Richardson, fishing buddy and fellow garden center operator Dennis Ouellette and me, adventure is in our nature. As we headed north and east, the last stops would be just before the ocean, on the Kegashka and Natashquan Rivers in the First Nations reserve of Nutashkuan.

Flying through fog, we literally tasted the fresh boreal forest air before landing on choppy waters.

Planning began months ago. We had to figure where we would make camp and where fuel would be available. Take-offs and landings were calculated based on the weather. Richardson has been flying to this area for decades. He knows the local Innu (meaning “the people”). He’s fluent in a variety of languages and is an excellent cook.

As the pilot, he had to be on top of his game every minute before, during and after flight, since nothing is guaranteed. There are no control towers on the rivers that became our landing strips; one single miscalculation could prove to be our last.

Additionally, we had to coordinate our timing with the Atlantic salmon who would be leaving their ocean home to begin spawning runs up the rivers. This year was a late run. The fishers who plied these waters in June fished for 10 days and didn’t catch one salmon in water five feet above flood stage, which is not a good thing. Richardson’s bush plane allowed us flexibility that commercial planes and schedules do not.

All water is connected and rivers have connected everyone on this planet since the beginning of time. But the world is undergoing climate changes that may not be understood in our lifetime.

Above the Arctic Circle in Finland this summer, it was 90 degrees Fahrenheit, so it was hard to plan what to pack in our duffle bags: long underwear or light shirts? Since our Cessna 185 bush plane on floats could accommodate just 1,000 pounds of people, gear, food and drink, we had to be judicious.

Richardson literally weighed every item with his eyes. He made me leave behind luxuries such as extra underwear.

Also shelved was an extra pair of waders. “If yours springs a leak, then you’ll be freshly washed every day,” he said.

And he allowed only one pair of boots. The outdoor gods must have chuckled when Richardson unpacked at camp to discover his brand new purchase was two right-footed boots. Suddenly, my well-worn muck boots were highly prized as Richardson and I have the same-sized feet.

Once on the water, mental clutter melted away as we focused on the task at hand. That usually involved a fly rod, a swift current, and timing the fishing based on the tide.

When the tide comes in to an inlet blocking the outflow, the peat-stained river crawls. As the Coca Cola-colored water slows, the sun has a greater effect on the surface temperature, the same surface where we worked our dry flies called bombers on eight weight fly rods.

When the water temperature warms to 66 F., the fishing really quiets down. Keep in mind it takes an average of more than 1,000 casts to land a single wild Atlantic salmon, and when the fishing slows, the mental clutter resumes.

One thousand is a pretty big number to do anything. A fair amount of our idle time was occupied swatting bugs. The black flies and mosquitoes can be fierce, so we tried to wear only blue, black or green to avoid attracting the constant swarm of bugs. In addition to netting, I use Picaridin repellent instead of DEET, as DEET will melt fishing line and damage tackle. I also wear highly effective Permethrin-treated clothing.

Life was not meant to be lived by merely going through the motions. Invigorating evening air punctuated by the crackle of fire re-charged us for the challenges of the coming day. Waking up at dawn, our appetites were quenched with a breakfast of maple syrup-laced coffee, pork and beans, eggs, and “Newfoundland steak,” also known as fried bologna. I passed on that last staple after day one.

Despite evidence of climate change, we still caught fish and I did set a new International Game Fish Association World Record on my fly rod. I carefully measured the fish at 76 centimeters before gently releasing it back into the water to spawn again.

There are always new life lessons to learn on any trip. I learned how to fix broken glasses with Crazy Glue sprinkled with baking soda. The copier repair tech said this has been his go-to option for years. Who knew?

Not all adventures follow a path; breaking away from our usual habits creates new layers in our lives. I think many people fish their whole lives not realizing that it was not the fish they were truly after.