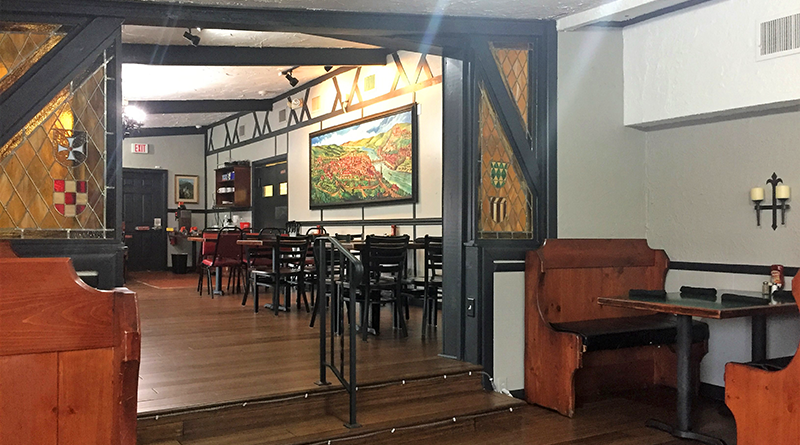 German food is finally back in Syracuse

Danzer’s opened on Syracuse’s North Side in 1946 and moved to Ainsley Drive, in the southeast corner of the city, in 1971.

When Danzer’s closed right before Christmas 2015, it seemingly meant the end to one of Syracuse’s longest-running restaurants, a relic of the city’s long-standing history of German restaurants that included the likes of Weber’s and Gruen’s.

So, when Danzer’s German & American Gasthof reopened in January under new ownership and a fresh coat of paint, Central New Yorkers were rightfully excited with anticipation.

Danzer’s is back. Well, most of it.

Gone is the chipping green paint inside and outside the restaurant and the dated, dark wooden bar that greeted diners upon entering. In their place are a sleek coat of black paint that contrasts the restaurant’s bold yellow and red sign and a renovated bar that’s brighter and more modern, while still retaining the wood beams and wrought iron sconces so characteristic of the original restaurant.

Also retained are the massive hot open-faced sandwiches, like the big rueben, which has red cabbage instead of sauerkraut, and the hamlet, a Danzer’s original creation.

We started our lunch with an order of rueben egg rolls ($8.25). Served two to an order, the rolls were fried to a crackling golden brown and packed full of corned beef, sauerkraut and Swiss cheese. Unlike many egg roll wrappings, which can often be too thick and doughy, these were thick enough to contain the large amount of filling without bogging down the dish. A side of Russian dressing for dipping was a traditional and welcome pairing.

The bacon listed on the menu was missing on our sandwich, but it wasn’t really missed, as the heaping helping of ham provided plenty of smoky pork.

At first, I was hesitant that the cabbage and carrot coleslaw would be unpleasant once broiled underneath a blanket of melted swiss cheese.  But like the tuna melt sandwich proves, sometimes ignoring common sense and heating up a mayonnaise-based food can pay off handsomely.

However, between the coleslaw and Russian dressing, this sandwich was saucy and messy. It’s tempting to fold the two halves together and pick it up, but the steak knife — and the extra napkins — are provided for a reason.

Thanks to a generous slathering of gravy on top, there was no temptation to pick up our sauerbraten sandwich ($11.99). Two large slices of beef eye round were served between two slices of the same oversized dark rye bread with an ample dosing of gravy inside and outside the sandwich to top it off.

If you’re looking for a photogenic sandwich, this is not it. The brown bread, braised beef and gravy all made for a very monochromatic sandwich. Unlike the hamlet, this sandwich is not broiled, so the bread had no chance to toast. As a result, the soft bread — particularly the bottom piece — became soggy.

The gravy was a bit thick, but along with the beef, provided the piquant vinegar flavor with just a bit of sweetness and spice that’s crucial for proper sauerbraten. The meat itself, akin to pot roast, was fork-tender without being stringy.

Per our server’s suggestion, we ended our meal with a slice of turtle cheesecake ($7.25), one of several homemade desserts served daily. With a buttery caramel sauce on top and a hefty amount of chocolate and pecans mixed in, the cheesecake was an indulgent treat.

Save for a few hiccups, Danzer’s is clearly regaining its steam after more than two years away, or three, if you include a chaotic final year under its old ownership that included a staff walkout, insect infestations and a month-long closure for repairs.

After several years of waiting, Danzer’s, and by extension, German food, is back in Syracuse.