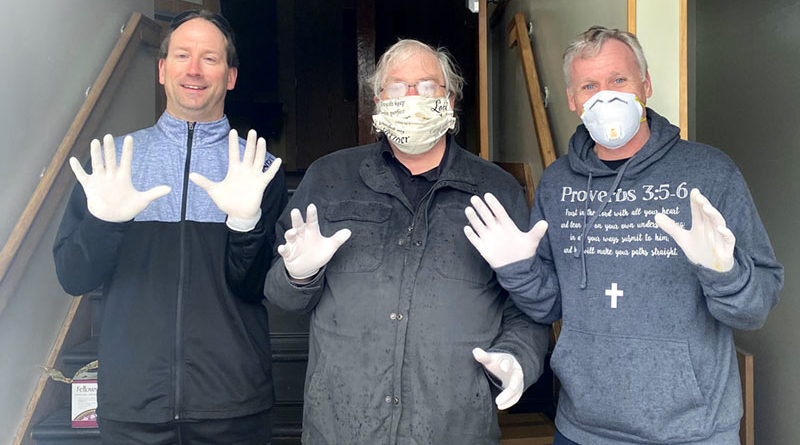 Believers have found creative ways to connect, minister and express their faith while still maintaining a safe distance

Social isolation has extended to all areas of life, including to congregations. Believers have found creative ways to connect, minister and express their faith while still maintaining a safe distance.

“During this period, it’s helpful,” said Jodi Ann Mullen, Ph.D., a licensed mental health counselor and a professor at SUNY Oswego in the counseling and psychological services department. “It’s not just connecting to the others but to the community. That may be the more important connection. And knowing we’re all connected by our faith. That is especially important right now — to feel connected to others, community and faith. There’s a lot of ambiguity to what our lives will be post-pandemic. It’s grounding. If that’s part of your routine to always attend at this place of worship with these people, it makes you feel grounded despite what has change. There are some things that stay constant.”

At Bible Baptist Church in Oswego, Pastor Steve Sallis has been sharing sermons through Zoom. “The good thing about Zoom is that someone without a smartphone or internet can call in and listen,” he said. “Those who can get on enjoy seeing and hearing each other. It’s like the fellowship before a service. It’s a good substitute for being there in person. When I start preaching, I mute everybody. After the sermon, I unmute it and we can have visiting time again. It’s amazing how long everyone stays on.”

Sallis had been serving as interim pastor for a few months before becoming pastor in late March. He’s actually never led a service at his church in person; however, through Zoom he has been able to lead his congregation of about 35 each week.

The experience has prompted him to want to revamp the church’s social media and website and perhaps continue to stream services once the current crisis ends.

Other than a few minor technical problems, it’s gone smoothly, he said.

In addition, the pastor and his leadership team of five have been calling members of the church to check in on them.

“Some of them are older folks who aren’t getting out,” he said.

The church normally holds communion the first Sunday of the month. On March 29, Pastor Sallis told the congregation to have some juice and a cracker available for the April 5 service.

“Just like I do in church, we talked about Jesus laying down his life for us,” he said. “And then we took the bread and ate it and drank the juice.”

Some of the church’s members set up a means of giving offerings to the church online.

“Giving is part of worship and time of giving our offering at our church is a special time,” Pastor Sallis said.

“If we don’t, we feel something’s missing,” said Thea Smith, the wife of the pastor, Monte Smith.

To remain in compliance with social distancing rules and to keep participants safe, the church received approval from law enforcement to offer ministries via drive-through. Communion is administered through pre-packaged, sealed communion sets of grape juice and bread to anyone in the community between 10:30 and 11 a.m. on Sundays. Participants may drive in, pick up their communion sets and either leave or partake in the church parking lot. The church groups them by number so each carload can take as many as their family needs from gloved and masked workers. Bible Baptist also makes sure that those who can’t get out to the church have a couple of months’ supply so they can have communion at home to commemorate Jesus’ broken body and shed blood.

“A deacon and elder is there,” Smith said. “We write down prayer requests. With masks on and gloves on, they drive up and we ask if there’s anything they need.”

The church also posts sermons on the church website and streams them to Facebook. The technical aspects have been new and challenging for the Smiths.

Pastor Smith has been preaching from his office via a donated iPad. One sermon received more than 800 hits. Normally, about 110 attend the church.

“He was shocked that so many listened,” Thea Smith said. “I hope we’ll continue doing this. There are a lot of people who appreciate what he says and how he says it. If he puts ‘A Moment with Monte’ out there every week, there’s a following.”

The Smiths have also extended their youth ministry to the digital world through texting, Facebook and phone calls, as well as mailing things to the teens to keep them focused. Pastor Smith offers counseling online for those in need of his help. The church’s food pantry has also gone into drive-through mode by handing out boxes of food pre-packaged by the Food Bank of Central New York and pre-made meals donated by Wegmans.

“No one is allowed out of their cars,” Thea Smith said. “They open their trunk, and gloved, masked volunteers put the food in. Jennifer Hokanson and Randi Jace have been so good at keeping it all organized.”

Some live meetings have been canceled or moved to Zoom; however, the church family showed their love for their pastor by organizing a drive-through surprise birthday party. A parade of 50 cars drove through the church parking lot decorated with balloons with congregants shooting silly string, honking their horns and holding signs.

“They pulled in back of the church and circled up like wagons in the Old West,” Thea Smith said. “They were all 6 feet apart. They brought gifts they put on a table. They just threw love at him. They had him hit a birthday cake pinata full of candy and carpentry things he likes, like electrical tape and glue. It was a fun thing. He was just dumbfounded because it’s hard to pull off a surprise.”

Thea Smith believes that despite isolation, it’s important to carry on with what’s important.

“Things have changed but they haven’t stopped,” she said.  “The building is just a tool. We are the church.”

Todd Caputo, a Christian who goes to Missio Church in Syracuse, felt bad about having no place to attend Easter services. He said that a week beforehand, he saw posts on Facebook about churches hosting drive-in services at their churches. Caputo is CEO and president of Sun Auto Group.

“I felt like the Holy Spirit was telling me to do this at the dealership,” Caputo said. “If God didn’t connect me to more people, like at the radio station at CNY Central, it wouldn’t have happened.”

Hosted as a Christian prayer service, the Easter celebration included Roger Burdick, also a Christian and area car dealer, who prayed, as well as Mike Mayve, an elder and pastor at Renovation Church in North Syracuse, who offered a message. Renovation also offers streamed services.

More than 100 cars parked at the car lot for the service. Christian radio station WMHR broadcast it to its listeners and so attendees could hear the service from their vehicles and CNY Central broadcast the service.