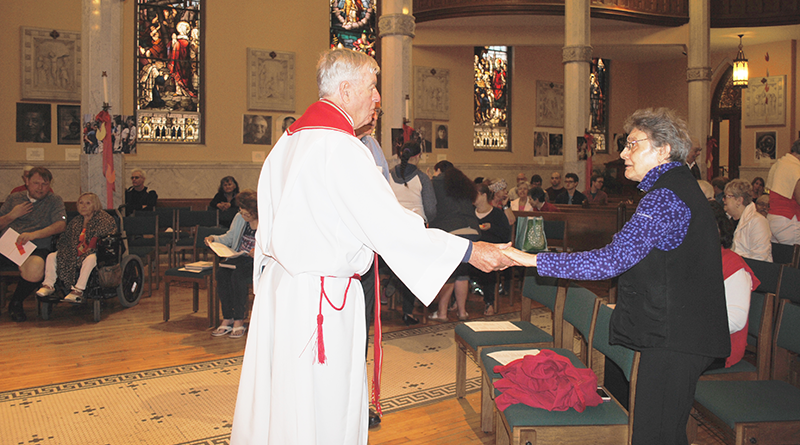 Reverend has led St. Lucy’s Church in Syracuse for more than two decades, devoting time and energy to the poor 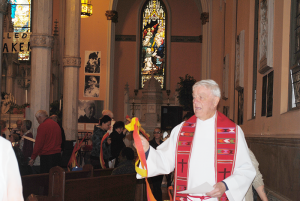 It’s Pentecost Sunday, considered to be the “birthday” of the Christian Church, a day that commemorates Jesus’ disciples receiving the Holy Spirit. That is when the apostles and believers were united in a common language and began to preach the Gospel.

It’s raining and brisk outside, but the weather cannot dampen the spirit inside St. Lucy’s Church, on Syracuse’s near west side. In celebration of this church feast, Rev. Jim Mathews leads his parishioners up and down the aisles of the church, singing and waving colorful streamers.

Father Jim — as he’s known to everyone — has been leading St. Lucy’s Church for more than a quarter century, but he’s also been a leader in the near west side neighborhood, one that continues to see its share of challenges. According to the United Way of Central New York, it is one of the most indigent in the country.

An article that appeared in November of 2014 on Syracuse.com stated that more than half of the residents in this neighborhood fall below the poverty line.

Statistics on the city of Syracuse’s website indicate that in 2010, the median income in that neighborhood was just over $14,400.

But for Mathews, it’s a neighborhood rich in spirit and the people are the core of his ministry.

Mathews is beginning his 26th year at St. Lucy’s.  “It’s some kind of record for me. I don’t keep a job that long,” he said with a chuckle.

This year, he is also marking his 80th birthday and his 55th anniversary as a priest.

Since his ordination in 1962, he has served in seven different parishes in and around Syracuse.  He claimed to have gotten fired twice because he and some of the pastors at his assigned parishes didn’t get along.

But Mathews, who grew up in Solvay, went to Christian Brothers Academy for high school and then on to Holy Cross, has found a home at St. Lucy’s.

The church, according to one local newspaper, is one of the four pillars in the near west side neighborhood.

“I wouldn’t want to live any other place. I love it there. I love the rectory. We have a big old rectory. And I’m very comfortable there,” he said. “The people are my family. I’m very close to them. I enjoy them. They’re my closest friends.”

Some attribute Mathews for bringing some lapsed Catholics back to the church, but he doesn’t quite see it that way.

“I don’t think I do any of that. I think that there’s a real good Gospel spirituality at St. Lucy’s, and we find so many people from the suburbs that are attracted by it. That’s why we have so many suburbanites coming down to St. Lucy’s. They see something special,” he said.

Mathews said it’s not about the rules; it’s about being open to people’s suggestions and involvement that makes the church.

“It’s the spirituality taught by Jesus that we find in the Gospels. It’s not rules and regulations,” Mathews said. “It’s nice to say that everyone’s following the rules and everybody’s doing exactly the same thing, but that does not work because you’ve got people that are totally different — different cultures, different language, different backgrounds, different economic status.

“And so you’ve got to be creative and open to doing things in a new and different way and hearing the voice of the people and letting them speak,” he said.

And let them speak he does. He has 25 people that serve as preachers.

During the liturgies on a Sunday, he said, he doesn’t sit in the celebrant’s chair, but among the members of the congregation.

But Mathews has his critics, some who find his ways too unorthodox, but their opinions don’t faze him.

“I don’t have to defend or apologize to them,” he remarked. “I worked hard to get where I’m at. And some people, they’re just going to follow the same old rules that they’ve always had, and if that’s fulfilling for them, that’s OK but it’s not fulfilling for me.”

In the 55 years since Mathews was first ordained, he has seen a great deal of changes. Two challenges facing the Catholic Church are intertwined — the decreasing number of men opting to enter the priesthood, which is causing churches to close or parishes to merge. Mathews is candid about the problems.

“It’s not going to go away and it’s not going to get any better. And the answer’s not to keep closing churches, so someday we’ll have mass at the War Memorial,” he said. “That’s not the way it was founded. It was founded to have small communities. So we have to be open and creative in different way.”

Another matter causing Mathews concern is the recently announced policy being instituted by the Roman Catholic Diocese of Syracuse. The diocese is notifying priests older than 80 that they must give up their day-to-day administration of parishes.

In a recent local news article on this new policy, a spokesperson for the diocese explained that older priests are being asked to retire from the duties of running a parish, but can still perform the sacraments.

According to canon law, a pastor or bishop must submit his letter of resignation at age 75. At that point, a bishop can decide to accept the resignation of a priest, or allow an extension, or in the case of a bishop, the Vatican decides on extensions, the diocesan representative said.

While the diocese has not approached Mathews about retirement, it still is a matter that raises his ire.

He would have preferred that the diocese reached out to the affected priests and asked if they wanted to retire and how the diocese could make their last days happier.

“They make a decision saying you’re out,” he added. “That’s not the way to do business in today’s church.