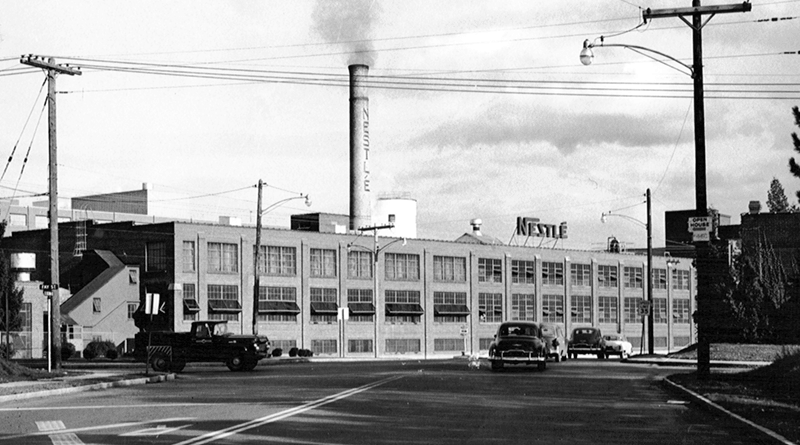 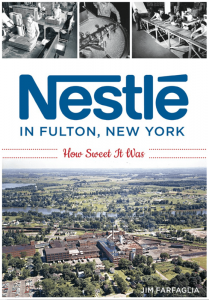 It was unmistakable. For decades, travelers through the city of Fulton would savor the scent of sweet chocolate wafting through the air as Nestle Co. produced the tasty delight.

Now, local author Jim Farfaglia captures that experience in his new book, “Nestle in Fulton, New York: How Sweet it Was.”

Since 1907, Nestlé became coveted not only by chocolate lovers, but also by generations of workers who depended on the company for their livelihoods.

However, in 2003, after more than 100 years, citing the high cost of restoring and updating the aging plant, Nestle closed the factory, leaving 400 local employees jobless. At its height, it was home to 1,700 workers.

A lifelong Fultonian, watching the Nestlé factory being torn down was Farfaglia’s initial inspiration for his book.

Farfaglia, 63, realized that after those buildings came crumbling down, there was nothing to indicate that the first Nestlé factory in the United States was once in the city of Fulton.

“A book to honor the factory and its workers would be a beginning to preserving those memories,” he said.

The book explores three topics: the 100-year history of the Nestlé plant in Fulton, including the story of the company’s founding factory in Switzerland and why it chose a Central New York city as the site of its first U.S. factory; descriptions of the chocolate-making process that Fulton Nestlé workers perfected, including how many famous products (such as Toll House morsels, Crunch Bar, Nestlé Quik) were created; and stories and memories from those who worked at the plant.

The author did research for his most recent book in much the same manner as he did for his previously written local history books. He read newspaper accounts, reviewed paperwork and reports, conducted internet searches, and interviewed those who worked with or were involved with the topic.

“I was fortunate to talk with about 70 people who worked in different departments or were in managerial positions at Nestlé,” he said. “A few workers gave me access to a collection of photographs that dated back to the company’s early years, so I was able to include images from the century-long history of the plant.

The labor of love, published by Arcadia Publishing, took him two years to write.

He interviewed and researched for approximately one year and then wrote and edited in the second year.

Farfaglia noted The Friends of Fulton History (the Pratt House) was instrumental throughout the research process.

He enjoys writing in two genres: poetry and historical non-fiction.

“The Best of Fulton” book was a collection of poems Farfaglia had written and published in The Valley News.

“When I stopped writing that column, I wanted to preserve those poems honoring our city,” he said.

“I had only two memories of Nestlé’s years in Fulton: the smell of chocolate in the air and a tour of the plant when I was a youngster,” Farfaglia said. “I had no idea how chocolate was made and how a factory operates. I needed to learn a lot before I could begin writing.”

However, he was also aware that there is bitterness toward Nestlé for pulling out of the city.

“I didn’t want to write a book that focused on negativity. I knew I had to address the closing of the plant and its effects on Fulton, but I didn’t want that to overshadow the many positives that the factory gave to our city,” he said.

Farfaglia reflected on what gratifies him the most about producing the book.

“I’m a writer, so the act of writing and editing is what I enjoyed the most. I love tinkering with words, trying to find the best way to express an idea or fact,” he said.

He noted the year he spent writing and rewriting was highly enjoyable.

“I also love to hear stories from people who lived through the topic I’m writing about,” he said. “Taking their memories and weaving them into a book gives me a lot of pleasure.”

Fulton has experienced some economic tough times in the last 20 years.

“We’ve lost a lot of industry, including Nestlé, which has resulted in some people feeling negative about our city’s future,” he said. “In my book, I show how Fulton, which was just forming when Nestlé offered to locate its first factory here, embraced the challenge of properly welcoming them.”

He said a group of positive-thinking citizens came together and found a way to offer Nestlé land to build its factory.

“How can we use that same optimism in 2019 and make our city a better place?” he asked.

Farfaglia is all in when it comes to memorializing Nestlé’s history in Fulton.

When Farfaglia interviewed him for his latest book, Fulton Mayor Ronald Woodward, a former Nestlé employee, talked about the idea of having a museum to honor the factory.

“What a great idea! After all, we were the site of Nestlé’s first American factory and so many great products were invented and produced here,” Farfaglia said.

He said the city needs something to honor that legacy.

Farfaglia added a museum would also be an excellent point of interest for tourists.

“Who wouldn’t want to tour a museum about chocolate? I know that others who once worked at Nestlé in Fulton are also excited about this idea and there are plans to begin the research on how to go about making it happen,” he said.

He taught in an elementary school for seven years, and also worked for the Oswego City-County Youth Bureau, which oversees the Camp Hollis program.

When he is not working on his next book — which will cover the history of the Camp Hollis children’s camp — Farfaglia, the father to two grown children and grandparent of two, enjoys hiking, gardening and playing piano.

“Nestle in Fulton, New York: How Sweet it Was” is available at river’s end bookstore in Oswego, the Village Shops in Fulton, Barnes & Noble and through Amazon.