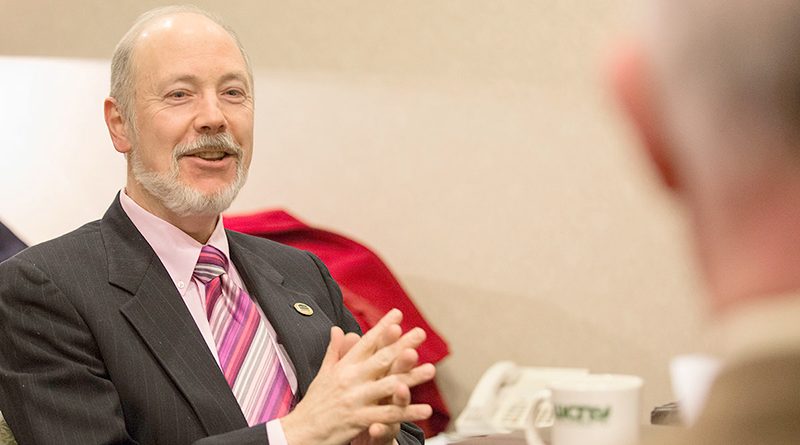 When it comes to politics, Robert Spitzer is like a royal guard at London’s Buckingham Palace.

No matter how outlandish the behavior or events, Spitzer does not flinch. And yet, when the classroom empties and the lectern is pushed aside, he can be found smiling, singing and dancing.

The SUNY Cortland political science professor, television commentator and author has seen a lot in his time, from the reforms of the 1960s, to the manic political peaks and valleys of the 1970s, ‘80s, ‘90s  and beyond, to the most unpredictable antics of the Trump administration.

“That’s what keeps it interesting,” Spitzer, 63, said in a recent interview. “That’s what makes it fun.”

And if having his finger on the pulse of America’s democratic system wasn’t interesting enough, Spitzer often switches gears, ending his workday in the classroom to perform with the Cortland campus thearer group.

The Mohawk Valley native took some time recently to explain how he got to his oasis in Central New York that allows him to balance education, the arts and current events.

When he is not in classroom, SUNY Cortland political science professor, television commentator and author, can be found smiling, singing and dancing

Spitzer grew up in the Utica area, graduating from New Hartford High School in Oneida County. His father, Bill Spitzer, worked many years as a window washer before getting a job with the New York State Lottery. He started as a sales representative and eventually got promoted to the regional director position. His mother, Virginia, was a homemaker. Spitzer has a young sister, Gail, and an older brother, Gary.

Utica, of course, had a reputation back then as a hot bed of corruption. Spitzer’s parents were involved with the reformist movement that tried to clean up local government. Both of them volunteered for reformist election campaigns.

“Utica was dominated by machine politics for many years,” Spitzer said. “It was discussed at the dinner table every night.”

Naturally, Spitzer developed an interest in social studies and politics early on. But he also had a passion for music and the arts. He chose to attend college at SUNY Fredonia in Western New York, where he could learn about the history of America’s leadership by day, and perform on stage in campus theater productions by night.

“It was a great place,” he recalled. “I could get involved with so many things out of class.”

In 1973, Spitzer landed an internship in Washington, D.C, which at the time was rocked by the Watergate scandal. He worked for the Democratic National Committee. His supervisor at the time was Hamilton Jordan, who later became the chief of staff for President Jimmy Carter. At one point, Spitzer thought about getting involved in Carter’s campaign, but elected to pursue a career in the teaching side of government instead of the public service side of it.

“I didn’t want to get involved in specific political causes,” Spitzer said. “I was more interested in understanding why people vote the way that they do, what issues mattered to people, and the political process itself.”

Intent on becoming a subject matter expert on those topics, Spitzer enrolled at Cornell University. It was a great fit for Spitzer, and he was able to earn both a master’s degree and a PhD within four years, though during this time he was spread too thin to participate in campus musicals. After completing the program, he was also hired to teach at Cornell, where he still works on a part-time basis today as an adjunct professor.

Spitzer brought his impressive resume to SUNY Cortland, and was hired to teach there in 1979. The school was much smaller then, and faculty jobs were hard to come by. The political science professor considered himself “extremely lucky” to get in.

Spitzer got involved in publishing his viewpoints about some of the most heated issues in politics a few years into his tenure. It began with an invitation from a friend who was putting together a book covering the most heated issues, including gay rights, abortion and gun control. Spitzer took gun control because no one had already signed up for it.

During the research phase of that project, it dawned on Spitzer that, as far as he could tell, no book had been written yet about the politics of gun control. Spitzer’s own book on that topic was published in 1995.

“The issue is still more heated now than it was 30 years ago,” he said. “There is more anger and divisiveness between the two sides. The gun safety movement has experienced a revival. But the big question is will they be able to match the size and power of the gun rights side.”

The other topic that has continually fascinated Spitzer is separation of powers in Washington, D.C., and the constitutional power of the American president. And in more recent years, the power of the polls and social media in politics is always a hot topic in the professor’s classroom. 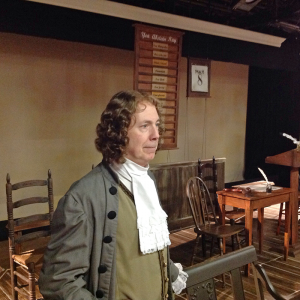 “The speed and potential availability of so many viewpoints is a good thing, obviously,” he said. “But the bad thing is the ideology it creates. The average American is more likely than ever to just obtain information for their pre-election point of view and shut out other information.”

And as for the events of the 2016 presidential election, Spitzer said, “this was beyond any prediction anyone could have made. As far as teaching goes, I don’t want to ignore it, but I don’t want it to become just a course about Trump. The idea is to integrate it into a case point of view.”

All told, Spitzer has written 15 books, five of which were on gun control and four on the presidency. His books opened up other opportunities, including testifying before Congress and participating in meetings at the White House. In 1997, SUNY Cortland promoted him to the rank of Distinguished Service Professors. In 2003, he received the SUNY Chancellor’s Award for Excellence in Scholarship, which was followed by SUNY Cortland’s Outstanding Achievement in Research Award in 2005 and 2010. He is also the former president of the Presidency Research Group of the American Political Science Association.

“It’s been a privilege, for sure,” he said. “Television took a while to get used to, but I feel like I’ve finally gotten better at it. I still feel like I have things to say.”

With so much national exposure, Spitzer has bolstered his resume. But he’s quick to point out that he has never spent much time taking his talents elsewhere. He loves Upstate New York, and SUNY Cortland has been very good to him. When Spitzer does get time off, his favorite place to visit is New York City — “the greatest city in the world.”

The professor never gets tired of Broadway performances. When he’s home during the academic year, he finds the most local stage available. He did community theater growing up and has performed in a number of musicals at SUNY Cortland over the years. He loves the applause of an audience, and he never gets tired of the look on students’ faces when they see him on stage for the first time.

“They are pretty surprised to see their stuffy old professor singing and dancing,” Spitzer said.

When he’s not in the classroom or behind a desk, Spitzer enjoys working out at the campus gym three days a week and walking almost daily. The Cortland resident strolls to work every morning and in his spare time frequents the more scenic routes around the small city. He also loves to cook, and claims his egg rolls are “almost famous.”

Spitzer and his wife, Teresa, have one daughter, Skye, who studied political science and works for the National Breast Cancer Coalition in Washington, D.C.

While Spitzer enjoys his career, he does envision retiring within a decade, with his sights set on travelling more and spending time in warmer climates.

Until then, says at least one of Spitzer’s colleagues, the political science professor’s energy, in the classroom and on stage, remains a major asset to the Cortland community.

“Everything he does, he dives with both feet in,” says Kevin Halpin, SUNY Cortland coordinator of musical theatre. “The students love him. I think they really respect his great sense of humor and timing. He’s fun to have on stage. It’s a place that he retreats to as a way to stay a balanced human being.”