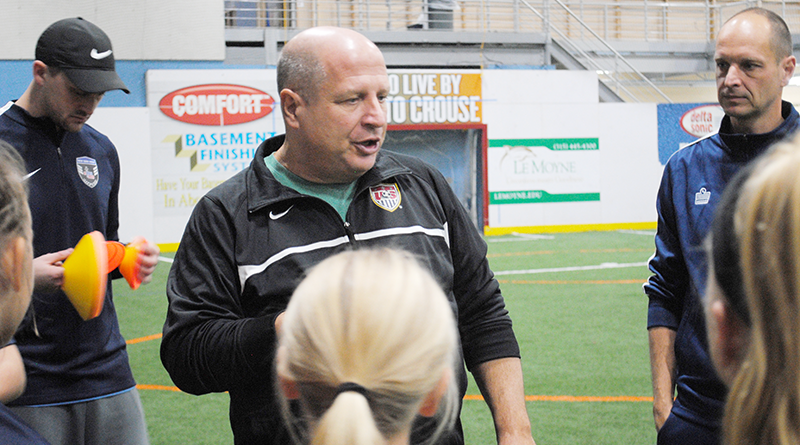 Soccer legend Dean Foti gives back to the sport he cherishes 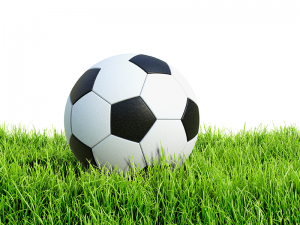 Dean Foti has been involved in soccer ever since he was a young boy growing up in Oneonta.

Since then, the 57-year-old has spent his entire adult life training new generations of players.

Over the years, Foti has played the game on the college level, coached, trained and raised three soccer players. Now as technical director of the New York West Youth Soccer Association, Foti has a number of responsibilities, including overseeing the organization’s Olympic development program, coaching and educating other coaches in the program.

The NYWYSA covers the part of the state from I-81 westward and from the Watertown area to points south that include Binghamton, Corning and Elmira. While its state office is headquartered in Rochester, Foti conducts many of his programs at the CNY Family Sports Centre in Baldwinsville, but still does an extensive amount of traveling.

When Foti was a kid in Oneonta, the town’s two colleges, SUNY Oneonta and Hartwick College, were powerhouses in soccer. At the time, both colleges were Division I and had national reputations in the sport.

“In a town of 20,000 people, that was the thing to do.  All the kids there grew up wanting to play the sports that the colleges played,” he said.

Foti went on to play soccer at Syracuse University on a scholarship, and he earned a bachelor’s degree in marketing. He became a graduate assistant coach at SU, enabling him to get his master’s degree in exercise physiology.

From there, he became a full-time assistant coach at the University of Maryland, returned to Syracuse University as the head coach of the men’s soccer team. In November of 2009, then-SU athletic director Daryl Gross let Foti go from that position, and news reports at the time indicated that Gross had wanted to make a change in the leadership of the men’s soccer program.  Eventually Foti became associated with the New York West Youth Soccer Association, NYWYSA.

The organization’s mission as part of U.S youth soccer is to continue to bring youth into the game, he said. So often these days, a lot of kids are opting out of participating in any sports and are spending time in front of a computer screen, he added.

Foti, like his colleagues in NYWYSA and other youth soccer organizations, is trying to change that mindset and encourage them to become involved.

“It’s an easy sport to fall in love with because all you need is a soccer ball. In our sport, the ball is the motivator. If you give any kid a soccer ball, they can amuse themselves,” he said. “You give a kid a ball, and he’ll start hitting it against a wall or start shooting it at a goal.”

“It’s amazing with the imagination of kids, if you just give them a ball and an area to play, what they come up with. It may or may not be soccer, but it’ll be something with a ball that they’re kicking around. It’s one of the universal things about the sport that seems to attract people to playing,” he added.

Calling it the “world’s game,” Foti said its popularity has gone through the roof, and he attributed that to several factors. With today’s technology, access to cable stations and the internet, people are increasingly exposed to it. They can watch games broadcast from anywhere in the world.

Also, there are now several generations of soccer players, so parents who may have played in their youth are now bringing their children into the sport. The popularity of the U.S. men’s and women’s national teams has also helped to grow the sport among young people.

Foti cited soccer stars, like Mia Hamm, Olympic gold medalist and FIFA Women’s World Cup champion, for bringing so much attention to women’s soccer and making it so popular.

“Now, the young girls that are growing up have mentors and people to emulate,” he added.

His work with NYWYSA has developed in the eight years he’s been with the program and has adapted to the times.

“The landscape has changed a lot, so now it’s not just about being out on the field and playing or teaching coaches how to coach,” he said. “A lot of it has to do with creating a safe environment for a player, whether it means by virtue of the methodology in which you’re teaching the game, or by the risk management you do.”

With the end game being player safety, there are a great many issues with which these youth organizations are contending.

For example, the organization makes sure there’s a vetting process whereby anyone who might deal with a child — a coach, manager, club administrator or referee — have background checks done on them. Others include putting safety protocols in place; determining when a child might be too young to participate; how much practice is too much; development versus the always-need-to-win mentality; and helping parents find the best place to start their child in the sport and which avenues to pursue as their child progresses.

It’s the development of the player that seems to give Foti the greatest satisfaction in his work.

“I think the biggest part of it for me is watching kids going from point A to point B, whatever that should happen to be, in terms of getting better as a player,” he noted. “As a college coach, it was neat to see how a kid would progress throughout the course of four years. This is even better because you look at kids who start out in our young academy.”

With younger players in academies, winning is not that important, he said.

This may sound odd coming from a former player and coach. But he explained that on the college level, the players, while they may still be developing to a degree, have already learned the fundamentals so there’s more attention on winning.

“The window for development is in those formative years,” he said. While winning in the early years is a factor, in some cases, it impedes development.

“How do we not impose adult values on youth sports?,” he asked rhetorically. “That comes into play a lot with winning and losing versus development. It doesn’t matter if you win or lose. At this point in the race, that’s irrelevant.”

Foti has been in the position of a coach and parent, but he’s been mindful never to mix the two roles. His three daughters — Riley and twins Lainey and Sophia — all played soccer.

They began with East Side Soccer in Syracuse’s Barry Park, before moving on to the Syracuse Fusion soccer club and the Jamesville-Dewitt High School team. The three are in college now, with two still playing the sport.

While he has helped train his daughters’ teams and shared knowledge with them, he didn’t coach them on purpose. He didn’t want to get caught up with making the decisions of who plays, who doesn’t, and how much time each player gets, he said.

If his daughters ever asked their father’s opinion of a coach’s request, Foti said he always sided with the coaches.

Otherwise, it “creates discord within the team. It doesn’t lend itself to team unity and common thinking of a group,” he said.

That team unity, working toward a common goal and discipline are not only attributes that Foti has taught his daughters. They are lessons that he believes soccer, like any sport, can teach to new generations of players.