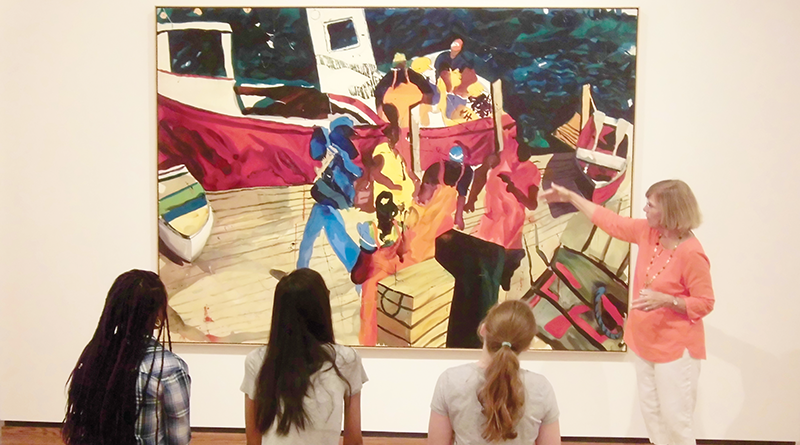 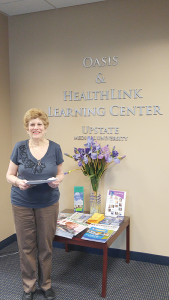 For Wendy Davenport, 69, volunteering at OASIS seemed the perfect way to spend her retirement.

Eight years ago, the Clay resident retired from teaching English literature and theater in the Syracuse and North Syracuse school districts. She had also taught at the college level at the Bryant and Stratton and Columbia College local branches in Syracuse.

Davenport has led a book club at OASIS, among other volunteering efforts. OASIS is a nationwide organization that offers a wide array of adult enrichment classes to people 50 and older. Many require just nominal fees to cover expenses.

“It’s different teaching high school literature because I’m working with older adults who are interested and want to be here,” Davenport said. “When I first started, another instructor said, ‘Isn’t it wonderful they’ve read the book first?’”

Also unlike high school, the group votes on which book they read next, ranging from recent popular titles to classics. About 25 to 40 attend Davenport’s club, which meets monthly.

In addition to book discussions, the club also watches films that have to do with the book, whether directly based on a title or generally associated with the same genre or time period of the setting.

Davenport also helps man the desk at OASIS and serves on the organization’s leadership team planning activities and helping the staff. OASIS in Syracuse employs four paid staff and volunteers comprise the rest of the group.

“We have a lot of people with an educational background,” Davenport said.

The area’s numerous educational institutions supply OASIS with a steady stream of retiring educators. These comprise much of the volunteer OASIS faculty.

Davenport has been involved in other community outreaches. She is a past member of the New York State Theatre Institute in Troy and served on its board eight years. For the past 12 years, she has been co-chairwoman of CNY Reads, which attempts to have the whole community to read the same book. She has also served as president of the English Speaking Union of Syracuse, which sponsors an annual Shakespeare Competition. High school students compete by performing a monologue.

When not involved with her literary pursuits, Davenport enjoys working with her therapy dog. She has visited a local elementary school to help some youngsters understand what therapy dogs do: provide emotional comfort and support. Davenport has taken her dog to nursing homes, libraries and funeral homes.

She also enjoys traveling and plans family trips with her children each winter with her children. This year, it’s tentatively the Pacific Northwest. Typically, the family visits someplace warm, such as New Orleans, San Francisco, Costa Rica, and the Florida Keys, among past adventures.

“I love traveling with the kids,” she said.

She and her late husband, Robert, have a son and daughter, who both live in the Rochester area. Davenport has one grandchild.

Anyone considering volunteering should “give it a try,” Davenport said. “Come to a place like OASIS and see what we have to offer and see if it’s a good fit. I really think when you retire, you need to have something else to do that’s meaningful and I’ve found that. It’s really rewarding.” 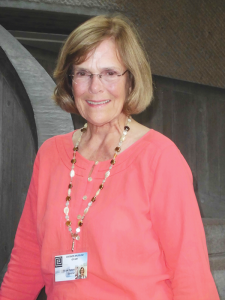 Judging by her knowledge exhibited as a guide at the Everson Museum in Syracuse, one might guess Ellen Hardy, 69, has at some point in her life created or taught art. But she has only recently gained knowledge on the subject. That’s what the former French teacher likes most about volunteering at the museum: the opportunity to learn and then educate others.

Hardy is a docent. The word comes from a Latin word that means “to teach” and that’s what the docents do: teach visitors about the exhibits on display.

Hardy had retired in 2008 from her position as associate principal at Roxboro Road Middle School in the North Syracuse Central School District. She and her husband, David, have lived in Syracuse for about 40 years. She didn’t want to spend her retirement years sitting idle. Giving back to the community through volunteering seemed a natural fit for her.

Hardy responded to the museum’s appeal for docents for an exhibit about impressionist art, which related to her background in teaching French. She has always appreciated art and was involved with the arts in education program at the middle school; however, leading visitors on an art museum tour requires in-depth knowledge of the exhibits.

The Everson brings in art and architecture faculty from Syracuse University to help her and the other volunteer docents learn about exhibits so they could offer visitors accurate and interesting information on the exhibits.

“It’s a unique program,” Hardy said. “We presented it to an national symposium last year.”

She enjoys sharing what she has learned with a broader audience.

Hardy also serves as the president of the Member’s Council.

“We work with the museum in carrying out various fundraising activities, the biggest of which is the Festival of Trees,” Hardy said.

The two-week event, which will take place Dec. 2 through 11 at the museum, includes trees and wreaths for sale on display throughout the facility, along with live music.

When she’s not at the Everson, Hardy enjoys golfing, skiing, kayaking, spending time with her four children and seven grandchildren, and traveling.

She and her husband, who retired last year, have explored Ireland and plan to travel to Germany.

“We go to all the museums,” Hardy said. “We’re always learning.”

They like to visit their children, two of whom live in California. Another one lives in Connecticut, and the fourth lives just a few blocks away.

Hardy also likes cooking, which stems from growing up in large family and mothering four children herself.

Hardy finds that volunteering at the museum is “like adult education for myself. It’s also a continuation for my passion of teaching.”

She encourages anyone interested in volunteering to think about what they enjoyed doing in their career and look for a way to continue that pursuit.

“It’s more rewarding if it matches your skill set and you can feel useful,” Hardy said. “It’s something you choose to do. A lot of the docents are former teachers or artists.”