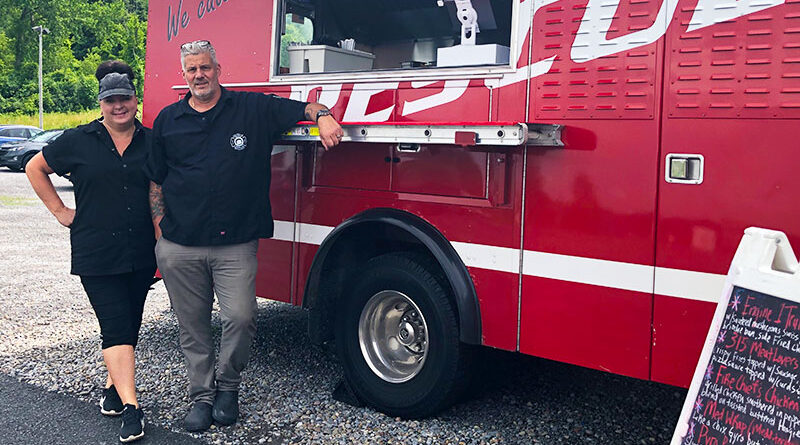 The first year Gerald “Jerry” Bolton hit the road with the Food Rescue Food Truck, it was his “side hustle.’’ For most of this season, serving meals to customers out of the bright red former fire vehicle has been Bolton’s full-time job.

In July, Bolton, 55, resigned his position as executive chef at the Oncenter, one of the biggest event venues in Central New York. For 24 years, he managed a kitchen staff of about 15, juggled events at the Convention Center, War Memorial sports arena and Civic Center theaters, created custom menus for brides and grooms and saw to it that hundreds of salads, entrees and desserts were ready to hit banquet room tables at the same time.

He loved his job and his co-workers and was a steady, unflappable presence in the Oncenter kitchen until COVID-19 hit in March 2020 and the complex went dark.

The shutdown caused him to re-examine his priorities and gave him a taste of what life would look like if he put the food truck on the front burner.

“I love it,’’ Bolton says of the truck, which he operates with his wife, Susan Pompo Bolton. “I enjoy working with Susan. We have fun. We’re a team. She’s been putting up with me for a long time.

“The food truck is working for us,’’ he adds. ‘’I’m working harder than I’ve ever worked, but this is a lot less stress. For years, I’ve dealt with everyone else’s problems. With the truck, my problems are my problems.’’

The Boltons have been married 34 years and have two adult children. In 2019, they (and a former business partner) purchased a retired 1988 Grumman fire rescue vehicle and hired a steelworker and metal fabricator to prepare it for a new life. The truck’s interior was gutted to make room for a four-burner stove, flat-top grill/griddle, deep fryer, charbroiler (commercial grill), salad unit and workstation with a large cutting board. A two-and-a-half-foot aisle separates the work areas in the 16-foot space, which helps it feel less cramped.

“It’s a restaurant on wheels,’’ Bolton says proudly. “It has everything a kitchen has and we’re the worker bees.’’

One thing the food truck doesn’t have is air conditioning. “It gets really hot in there, make no mistake,’’ Bolton says. “I think I lost 15 pounds the first season.’’

The Food Rescue Food Truck debuted at a private event in July 2020 and started popping up around Central New York. This year, the Boltons joined the Syracuse Food Truck Association, a trade and advocacy organization for people in the mobile food business, and hit the ground running. They’re regulars at food truck “roundups” and breweries like Middle Ages Brewing Company in Syracuse, Local 315 Brewing in Warners and Skaneateles Brewery. They’ve also been booked for neighborhood gatherings, weddings and other private parties and corporate events. They collaborate with local fire and police departments on special events and donate a percentage of proceeds to first responders.

Bolton grew up in the Camillus area and graduated from West Genesee High School in 1984. His parents divorced when he was 15, and he got a job as a dishwasher at The Inn Between in Camillus to help support his mother and siblings. He went to work straight from school most days, he recalls. He quickly was elevated to vegetable prep and helped plant and tend the vegetables in the inn’s vegetable garden. It was his introduction to farm-to-table dining.

He spent eight years at The Inn Between before moving on to another classic American restaurant, Morgan’s of Syracuse. There, he was one of three chefs. On his day off, he worked as a cook at a newly opened convention and banquet facility in downtown Syracuse, the Oncenter. He served as sous chef there for several years and was promoted to executive chef in 1997.

Susan Bolton, 54, learned to cook by watching her mother and says she has picked up skills from her husband, as well. She did most of the cooking at home when their children were growing up and worked with her brother for a few years at the (now closed) Second North Deli in Syracuse, making soups, sandwiches and pasta dishes. It was good training for the food truck, she says.

Operating a food truck isn’t as simple as filling the vehicle with food and gas and heading out. The Boltons do their prep work at Diamond Catering in Taunton and have also been assisting owners Dan and Teresa Seeley with special events. For food truck bookings, they keep an eye on the weather forecast and try to gauge what the audience might like. Their always-changing chalkboard menu features five to six items per event. Jerry Bolton describes the menu as upscale American comfort food with some Italian American influences. If it’s going to be hot, they might add a wrap or two. If it’s going to be rainy or chilly, they’ll add something hearty, like soup, chili, meatballs or chicken riggies.

Retired chef Randall “Randy” Colman, who worked with Bolton at his family’s restaurant, The Inn Between, when Bolton was starting out, has visited the Food Rescue Food Truck several times and enjoyed specials including a shrimp po’boy, clam chowder and pulled pork sandwich. “He’s got a really nice concept for his food truck,’’ Colman says. “His wife is quite a culinarian, too. … “Everything I’ve had from there has been delicious.’’

Eventually, the Boltons would like to add a second food truck to serve simple fare like homemade soups and grilled sandwiches. For now, they plan to have the truck out and about into November, if the weather allows.

“Last year, it was snowing at one of our events,’’ Bolton says.

Photo: Gerald “Jerry” Bolton and his wife Susan Pompo Bolton own and manage The Food Rescue Food Truck, which debuted in July 2020.