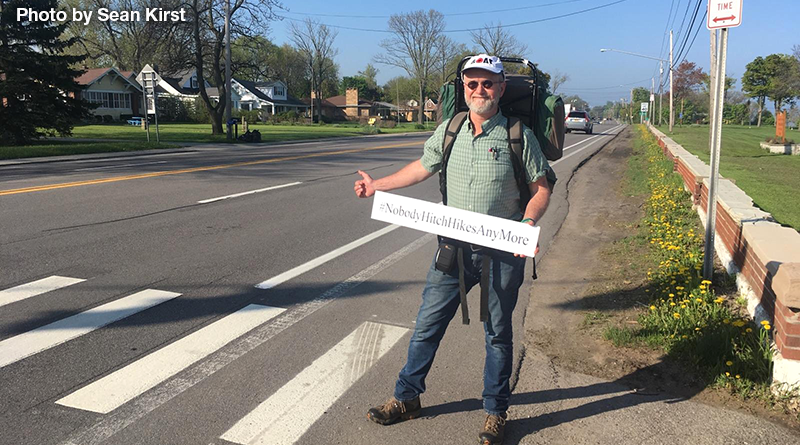 Ed Griffin-Nolan, a former Syracuse New Times columnist, hitchhiked from New York to California this summer – 40 years after he first did it

The first time Ed Griffin-Nolan hitchhiked from New York to California, he was 21 years old. He hit the road with a friend and carried a 40-pound backpack. There was no such thing as smartphones and no Facebook and Instagram to document the trip.

When he set out to recreate that trip this summer, 40 years later, friends and family generally had the same response: “Nobody hitchhikes anymore,’’ they said. That response didn’t stop him. In May, Griffin-Nolan packed his backpack, walked to Route 20, a couple miles from his home in Pompey, and put his thumb out.

Griffin-Nolan’s journey took just under three weeks. In late June, back in Syracuse and catching up with work and life, he said the road had been good to him. “It was amazing,’’ he says. “The people I met were great. I set out to find out if this thing I remember called the road is still there.’’

It’s there, he says, but at times he didn’t recognize it. Suburban sprawl has made it difficult to tell where you are, at times, and one metropolitan area looks the same as the next. “Interstates have killed a lot of towns,’’ he says. Secondary roads, like Route 20 or Route 66, are preferable and often take you through places where you would like to spend some time. But the rides tend to be shorter on those roads, he says, so he stuck with the highways.

Griffin-Nolan, 61, is a licensed massage therapist and an entrepreneur. He owns the Art of Massage and the Spa at 500, on West Onondaga Street, in Syracuse. In a past life, he served as a columnist and senior writer for the Syracuse New Times.

Griffin-Nolan grew up on Staten Island and studied journalism at New York University and economics at SUNY Albany. He spent much of the 1980s in Central America and in his younger years hitchhiked extensively. He and his wife, Ellen Haffar, an artist and art teacher, moved to Central New York in 1990 and have raised three children here.

No one was really surprised when Griffin-Nolan made his hitchhiking plans known, least of all his wife. “She’s cool,’’ Griffin-Nolan says. “Her idea of love is to let me or anyone be free to be who they are. That’s what she does. We travel apart sometimes. And we travel together sometimes.’’

For this trip, Griffin-Nolan endeavored to travel as light as possible. In his backpack, he carried a sleeping bag, a hammock, several changes of clothing, a smartphone, his laptop, a 1.5-liter water bottle, snacks (including raisins and summer sausage), wild cherry Lifesavers and maps. “I love paper maps,’’ he says. He didn’t use the hammock or the sleeping bag and says he probably won’t bring those items with him on his next trip.

Griffin-Nolan runs marathons and eats healthily, usually. He says one of the biggest challenges of his journey was simply getting used to the weight and awkwardness of the backpack. He walked a lot, at most about eight miles in a day, and kept himself hydrated and fed. He retreated to McDonald’s across the land frequently to cool off, rest, charge his phone and have something to eat. “I like a Big Mac,’’ he says. “Probably more than I should.’’

Dozens of memorable people gave him a lift and lifted his spirits: a mom with a carload of kids; a young man returning home from a job interview; a woman who hitchhiked to Texas as a teenager to get out of a bad situation; a waiter who had battled cancer; a ski board instructor; a truck driver making his way from Ohio to Miami, and many more.

The toughest places to land rides, he recalls, were Peoria, Ill; Craig, Colo., and Omaha, Neb. In Craig, he noted on his blog, it was so hard to connect with a driver that it felt like someone was standing behind him holding a sign that read “axe murderer.’’ In Omaha, he says, the sun was intense and it was 105 degrees on the asphalt. He stayed out for two hours at a time, max. He met his future ride out of Omaha at a McDonald’s.

“More than half of the drivers that picked me up took me further than they had planned to,’’ Griffin-Nolan notes. His final driver, headed to Oregon with his Pomeranian Teddy Bear, went more than 200 miles out of his way to deliver Griffin-Nolan to San Francisco, where he spent a few days with his niece before flying home.

It’s not the thumb stuck out that gets you the rides, Griffin-Nolan says. It’s your smile, your attitude, your demeanor, the image you project — and maybe even the fact you’ve got some miles on you. “You’re almost constantly making decisions,’’ he says. “You’re constantly on. You’re presenting yourself to strangers.’’ Drivers would pull over and he’d get psyched for a minute — only to realize they had pulled over to check their phones or send a text. “That didn’t happen in 1978,’’ he says. “Rejection is hard to take.’’

Never on his journey did he feel afraid or threatened. “I don’t really get scared,’’ Griffin-Nolan says. But both passenger and driver do feel vulnerable sharing the close confines of a car with a stranger. “Vulnerability creates openness,’’ Griffin-Nolan says. “The result is there is no BS. People told me their stories and their stories of loss.’’

Griffin-Nolan is working on a book about his hitchhiking experience, the people he met and the stories they shared. He plans another hitchhiking adventure in November. “Could be Florida, could be Arizona, Mexico. On each trip the route varies depending on who picks me up,” he said.

In July, while driving near Otisco Lake, Griffin-Nolan met a young man from North Dakota hitchhiking and making his way east on Route 20. He picked him up and drove him to LaFayette, where they shared Sausage McMuffins at McDonald’s before parting with hugs. It’s not entirely true that nobody hitchhikes anymore.

To learn more about Ed Griffin-Nolan and his hitchhiking experience, visit https://nobodyhitchhikesanymore.com.