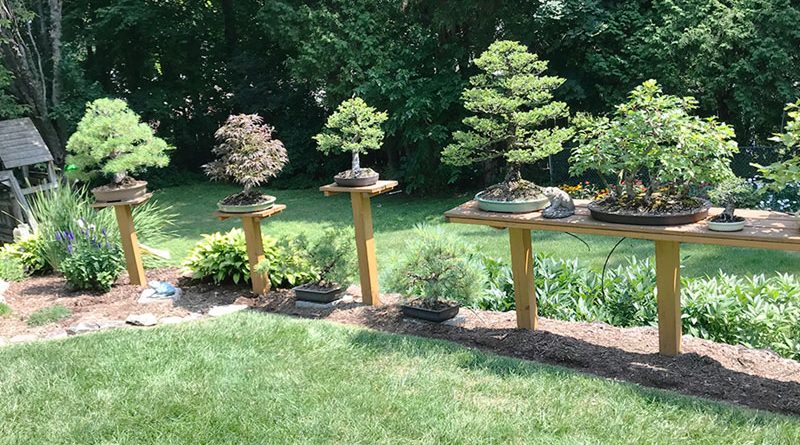 Thirty-some years ago, Carl Hoffner was inspired when he visited Longwood Gardens outside Philadelphia. He bought a book about bonsai in the gift shop and returned to his home in Fayetteville.

“I bought the ficus [tree], did some trimming, right in the middle of the living room,” Hoffner said. “That was the worst place for it. It died in two weeks.”

He’s been hooked ever since.

Bonsai trees —pronounced “bone-sai” — need to be outside in the sun, and these days he has more than 100 in his yard.

Each tree in his collection has been cared for hours on end, sometimes for decades.

Hoffner, 68, has trees older than he is. They have been passed down from others who, like him, have cared for them for years.

Bonsai is the art of trimming and manipulating a tree so that it resembles an old, mature tree while keeping it small enough to keep in a pot.

After 30 years of practice, Hoffner knows exactly where to trim a branch to make it grow a certain way.

In the end, a 35-year-old tree might only stand 6 inches tall but, from its exposed roots to its tapered trunk and shape, creates a tiny replica of a fully grown tree.

“You are trying to miniaturize a mature tree,” Hoffner said. And, sometimes, some of the smallest trees are the oldest.

Hoffner said any species of tree can be made into a bonsai. And while the general population probably associates bonsai mostly as an art form from Japan, it is becoming increasingly popular in America.

Hoffner said the internet has a lot to do with that. People’s growing interest and ability to learn the craft and techniques for different styles has gained interest because of YouTube videos and the abundance of information now available.

“I learned from books. There are a lot of good books. But, there’s a lot of bad books, too,” he said. “The last 10 years have been great. There’s so much on the internet now for people. I wish I had started now. I could have been lightyears ahead of where I am.”

He wasn’t always able to dedicate the time he has now to his bonsai. As a retired artist, he spent his working years pouring himself into studio work creating and selling original art through traditional lithography. He traveled often to gain inspiration — mostly from park settings anywhere from CNY region to around the country and around the world.

What’s funny, he said, is much of his art from those days is and was actually sold in Japan, where bonsai is most popular.

After he retired, his bonsai collection really multiplied, and he saw it as a nice transition.

“What do you do if you’re an artist already? I can transfer my creativity into the plants. In a way it’s still a studio,” Hoffner said.

He can spend upwards of six hours a day in his current “studio” taking care of each bonsai. Because they are planted in a granular soil, water runs through quickly. As a result, in the summer, each plant might need to be watered two to three times per day.

“Having bonsai is like having puppies,” Hoffner said. “And like puppies, the problem is finding someone to water them while you’re away.”

Hoffner is thrilled with the surge of interest in bonsai that he sees. And, believe it or not, being located in Central New York, also has its benefits for bonsai enthusiasts, he said.

He regularly attends world-class bonsai shows in both Rochester and Albany.

“In Rochester, one of the most famous bonsai artists in the world lives there,” he said. To have someone like William Valavanis so close to home, in a place like Central New York, is a huge benefit.

Hoffner has had the opportunity to attend class hosted by Valavanis, but stresses that there are resources available for anyone who is interested.

Hoffner is a member of bonsai clubs in Syracuse, Utica and Rochester.

“It’s a bunch of like-minded people,” he said about the groups. And while books and the internet can offer a wealth of tips and resources, “there’s nothing like raw knowledge.”

Locally, he is a long-time member of the Bonsai Club of Central New York. The club of about 25 members meets on the second Wednesday of the month at Pitcher Hill Community Church near the corner of Buckley Road and Bailey Road in North Syracuse.

There’s a lot of beginners, but also more seasoned bonsai hobbyists. Members can find out where to buy things, share tips and talk about technique.

And Hoffner is always surprised by what he learns from the tree itself. After shaping a tree for sometimes 10 years or more, one wrong cut and it can all be undone.

But, when it goes really right, he ends up with a 3-D piece of art, possibly with a defining branch, a secondary branch and the apex at the top. It leans forward with what look like arms outstretched, welcoming you in.

What about the CNY winters?

Central New York winters can be rough, but Hoffner said the trees go dormant in the winter. He moves the trees into his garage in winter months, and only needs to water them once every few weeks.

Learn more about the Bonsai Club of Central New York at www.cnybonsai.com

The club’s annual show is open to the public Sept. 7-8 at the DeWitt Library.

Photo: Carl Hoffner has more than 100 bonsai trees in his home’s backyeard. “You start with one or two and, suddenly, you have 50 or more,” he said.