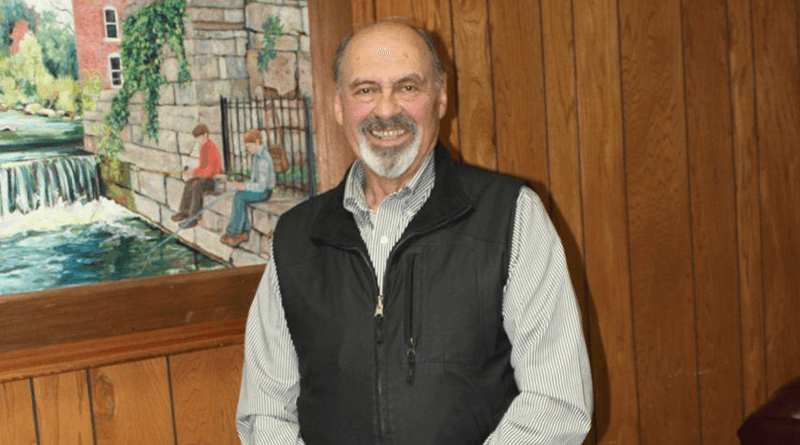 Mayor Richard Platten is the second-longest serving mayor in New York state, losing only to Lake George’s mayor, who has been on the job for nearly five decades

When I entered the Jordan village office recently to interview Mayor Richard Platten, he greeted me with an unexpected statement, “So you want to write about all the damage I’ve done in the past 40 years!”

Forty years — that’s how long he’s been mayor of this village in northwestern corner of Onondaga County, home to 1,300 people.

During that time Jordan has seen many improvements without significantly raising taxes to pay for them. Platten has a knack of tapping various grant programs. He works well with governmental agencies to tap their resources.

At 79 he has remained as enthusiastic about his leadership role as the day he started at his desk at the village hall.

He said he initially thought being mayor was strictly volunteer. He asked at the time, “You mean, we actually are paid for doing this?”

Receiving a $4,000 annual salary without raise in decades, Platten certainly isn’t in it for the money.

Although he officially spends about 20 hours a week on the job, he’s usually out and about much longer than that. For him there’s never a dull moment in the community, he said.

“Dick Platten has a real passion for his community and has made it his life’s commitment. He is a dedicated public servant,” said life-long resident Kenneth Bush, whose family has operated a funeral home there for several generations. “

But even with his long record of service he’s not the longest serving mayor in New York state. That record is held by Robert Blais of Lake George who beats Platten by eight years. At 83, Blais has been mayor of that village since 1971. Lake George’s population in 2017 was 3,426.

Since Platten, a retired school teacher, became Jordan mayor, virtually every street has been reconstructed, along with new cement sidewalks, the village’s own sewage treatment plant and other improvements.

Some $4 million has been spent on infrastructure, largely through grant money, though it’s been an uphill struggle with the loss of sales tax revenues and shrinking state and federal aid.

Still Platten keeps a positive attitude. He takes pride in the fact that it is now possible to walk downtown to do business, go to the library, local businesses or stop in at the village hall without having to drive or walk in the streets. This has also reduced traffic congestion as street parking is limited, he said.

Jordan is one of the few municipalities where residents do not have to shovel their sidewalks. Village DPW workers do that. The village not only builds, but maintains its own sidewalks. There is also an organized effort to bring new business to the village.

Recently a new Family Dollar store opened here in the building formerly occupied by a Tops Friendly supermarket. Efforts are being made to re-establish a grocery store here so residents don’t have to travel elsewhere. Luring grocery chains to open stores in small communities is difficult, Platten said, because they apparently don’t generate enough business to sustain themselves. “But we’re working on it,” he said.

“We also have an extensive recycling program to conserve our natural resources.” The mayor also said he wants to establish a “solar field” to reduce electricity costs.

A recent improvement was a new sidewalk on Elbridge Street into the village from the Lock Tender’s Drive residential development to allow residents living in that area to walk downtown without having to walk on the busy highway. This $100,000 project was made possible through a grant secured by former State Sen. John DeFrancisco. It also included laying a drainage pipe from the top of the hill down into the village, covering it up and laying a sidewalk on it. Another project was to eliminate a dangerous embankment on Clinton Street.

Platten said he is proud of the fact that unlike many other small local communities Jordan still has a considerable number of industries, which employ local workers. This includes International Wire Group, which is the largest bare copper wire and copper wire products manufacturer in the U.S.; Bennett Bolt Works; Hawker Construction; and P&M Fabrication.

Aside from the popular long-running Jordan Fall Festival, which annually draws thousands of people from throughout Central New York, Jordan’s biggest drawing card is being on the Erie Canal National Heritage Corridor. Thousands of bikers and hikers take advantage of the trail established years ago on the old towpath.

Jordan has been a “canal town” ever since the Erie Canal was opened through here in 1820.

“I’ve done the best I could”

A native of Seneca Falls, Platten and his family have resided in Jordan since 1965 when he took a position as a math teacher at Jordan-Elbridge High School. He retired in 1999 and has four adult children. “I loved every minute of it,” he recalled as he talked about his years as teacher. “The kids here are really great.”

He previously served on the village board of trustees.

One of the changes effected during his administration was to extend the terms of village officers from two to four years. He is active in community affairs, serving on the Jordan Pool Committee, Jordan Chamber of Commerce and Jordan Fall Festival.

He said he continues to enjoy his role as mayor and endeavors to respond to the needs of the community. Every village board meeting centers on a variety of things that need attention, from streamlining the village codes to addressing citizen complaints.

“We plan to continue the policy of Jordan being a full-service community,” Platten said. “We are centrally located, and it’s a great place to live.”

Asked about his many years in office, Platten said “I’ve done the best I could for the community.” But when his constituents are unhappy “they let me know.” Complaints are few and far between, he said.

Since the village sewer plant is only running at 65 percent capacity and there’s slow residential growth, discussions are on-going for tapping in a new sewer line from the neighboring town of Brutus in Cayuga County. Jordan is also dealing with the fact it is at the “tail end” of the Skaneateles Lake water district, and there are issues regarding this that need to be resolved, Platten said.

In the early 20th century there were numerous gas wells on the north side of the village. “I want to explore the possibility of re-developing them,” Platten said.

Making it possible for seniors to continue living in Jordan came when a 96-unit complex called Old Erie Apartments was constructed on North Beaver street. “We’re very proud of this development,” Platten said.

The secret to his success? “Being willing to make a commitment is the key to getting things done,” Platten said.

Platten’s hobbies [“when I have time”] include gardening, riding his motorcycle and woodworking.