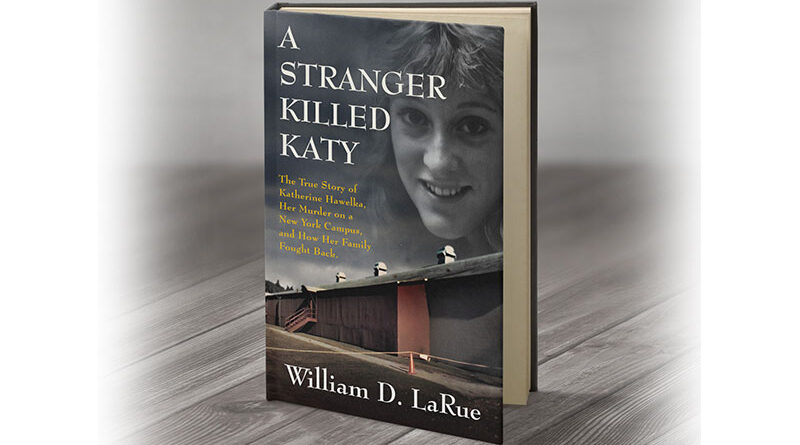 William LaRue was working as a reporter in the Auburn bureau of The Post-Standard and Syracuse Herald-Journal in August of 1986 when he heard the grisly news that devastated a Central New York family and shook the Potsdam community in rural Northern New York, where he grew up.

Katherine “Katy” Hawelka, 19, a Clarkson University sophomore from Syracuse, had been beaten beyond recognition, raped and strangled outside the college’s ice hockey arena. She was declared brain dead several days later. Charged with her murder was Brian McCarthy, 23, who, like LaRue, had grown up in Parishville, about 10 miles from Potsdam.

“My father called and said, ‘did you hear Brian McCarthy was arrested?’ He was a neighbor of ours when I was growing up,’’ LaRue recalls. “We went to the same school, his family went to our church and at one time I was their substitute babysitter. We weren’t close friends. I didn’t know him well. But there were some connections.’’

The story of Hawelka’s murder at the hands McCarthy stayed in LaRue’s mind for more than 30 years, and in 2018 he began to research a book on the subject. At first, he says, he thought he wanted to focus on McCarthy and what would drive a young man from a good family to commit such a horrible act. But the more he dug in, the more he felt pulled to tell the story of Hawelka and her family — and their fierce determination to keep Katy’s killer behind bars for the rest of his life. (McCarthy is up for parole again in April.)

With the blessing of the Hawelka family, LaRue wrote and has published a new book, “A Stranger Killed Katy: The True Story of Katherine Hawelka, Her Murder on a New York Campus, and How Her Family Fought Back’’ (Chestnut Heights Publishing, $21.95 hardcover, $14.95 paperback, $9.95 ebook).

“I wouldn’t have written the book if they had objected,’’ LaRue says. “I didn’t want to do anything that would worsen their pain.’’

Utilizing his reporter’s eye for detail and his engaging, accessible writing style, LaRue takes an in-depth look at Katy Hawelka’s life growing up in Syracuse’s Sedgwick neighborhood, her friendships, her experiences as a student at Henninger High School and her decision to attend Clarkson.

He uses police, court and prison records and other documents to take readers to the early dawn hours outside Walker Arena, when Katy walked back to her residence after a night out in Potsdam. He examines why two Clarkson security guards who witnessed the attack failed to take action sooner, probes the bureaucratic glitch that allowed McCarthy — who was on parole at the time — to avoid court-ordered supervision and explores why the judge gave McCarthy less than the maximum sentence in Katy’s murder. Her case raised many questions about campus safety and security and comments made by Clarkson officials prompted the Hawelkas to file a $550 million civil lawsuit against McCarthy, the university and the two guards.

LaRue says he relied heavily on news coverage of the time, including hundreds of stories published in The Post-Standard and Syracuse Herald-Journal, The Watertown Times and smaller community newspapers in the North Country. Even The New York Times covered the story and its impact on the community. Before the murder, Potsdam was the kind of innocent place where no one locked their doors.

He also interviewed more than two dozen people, including Katy’s mother, Terry Taber; her three siblings, Betsy McInerney, Carey Patton and Joseph Hawelka Jr.; and many of her close friends from high school and college. He also spoke with several former Potsdam police officers who investigated the murder; the district attorney who prosecuted the case; the chief of the ambulance crew that treated Katy on the scene; former Clarkson University President Allan H. Clark; and attorney Joe Fahey, who for many years has assisted Katy’s family in their quest to achieve justice for her.

“It’s amazing today the amount of information that’s available online,’’ LaRue says. “When something wasn’t online, I could often request it through email… There was a tremendous amount of documentation.’’

LaRue, 63, earned a bachelor’s degree in English from State University College at Potsdam and a master’s degree in communications from Syracuse University. He worked more than two decades as a reporter, TV critic and copy editor for The Post-Standard and retired in 2019 from his position as an online producer for newspaper websites owned by Advance Local. He lives in Salina with his wife, Kathleen. They have two adult children.

“A Stranger Killed Katy’’ is LaRue’s fourth book. He spent two and a half years working on it and says he retired, in part, so he could work on the book full time. It arrived at online retailers and in bookstores in mid-January and LaRue has been busy promoting it in local and North Country media.

For the Hawelka family, the pursuit of justice for Katy continues. The two-year cycle of parole hearings in New York state forces her mother and siblings to relive their nightmare pretty much constantly, LaRue says. Brian McCarthy will have another hearing in April, and Katy’s family will once again appear before the parole board to present victim impact statements and remind the board of the life McCarthy took in such a violent way. Thousands of people have signed online petitions opposing his release.

“You hear a lot about how the parole process is unfair to inmates,’’ LaRue says. “For the Hawelka family, every two years it’s like pulling a bandage off an old wound.’’

For more information on William LaRue and his book, go to www.williamlarue.com

Photo: Cover of “A Stranger Killed Katy: The True Story of Katherine Hawelka, Her Murder on a New York Campus, and How Her Family Fought Back.’’