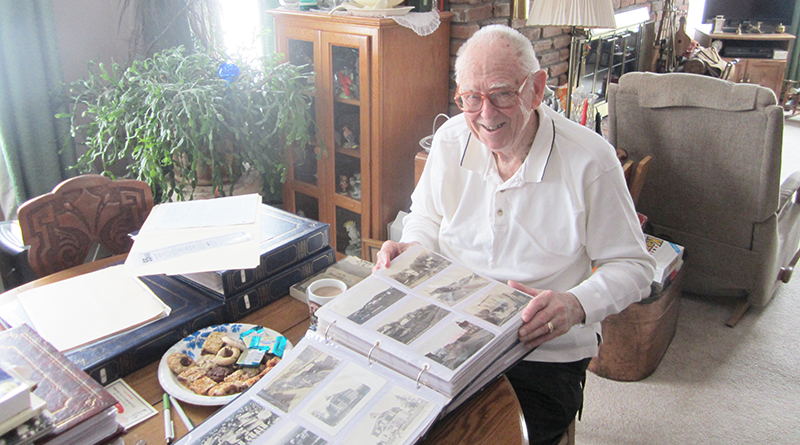 Collector has accumulated more than 5,500 postcards. At 86, he wonders about the future of his hobby in a new, digital age

Derwin “Doc” Jones of the village of Phoenix in Oswego County has been retired for over 27 years, longer than he held his position of athletic director in his community’s school district. From the beginning of his retirement in 1989, Jones showed a love of history through the collection of old postcards, many now dating back more than 100 years.

The 86-year-old’s collection, estimated to be around 5,500 individual cards, all began when his wife Lora gave him a book to read. It was called “Heartwood,” written by Marylee Armour of Liverpool.

“Burnap, who this book is about, drove the mail boat up and down the Fulton Chain of lakes,” Jones said.

Jones met Armour and they found they had some things in common. Both were teachers. Both had a love of the Adirondacks.  He called her a “super lady.” She even inscribed his edition of Heartwood. Sadly, Armour passed away in 2014 but a map in her book of the Fulton Chain had inspired Jones to start collecting postcards that documented a bygone era.

Doc’s first three cards were of the Bald Mountain House on Third Lake, a hotel that existed in the early 1900s. That was the same place he brought his family to vacation at their camp each summer. He, wife Lora and their five daughters explored the Adirondacks from the comfort of their mobile home, which was positioned up against the back wall of the original foundation of the hotel.

Many postcards that followed were of other hotels that once serviced tourists around the lakes or of local landmarks. In some instances Jones has postcards of the same building that may have had a name change when ownership changed hands.

“My concentration for quite a few years was just from Thendara, where the train station is, up to Inlet, that area, and out to Big Moose,” Jones said. Jones decided to arrange his postcards geographically.

“Book No. 1 I start in lower Old Forge and I come to the north side [of the chain] and I cover everything in the geographical location into Inlet and then down the South Shore Road. Then I made another loop that went up to Big Moose and that area. I have five volumes of cards of that part of the Adirondacks and that’s a little over 1,900 [postcards].”

The value of an old postcard is determined by both its quality and its scarcity, Jones said. Prices can range from pennies for finds at a garage sale to $100 for high quality and rare Labor Day cards. Jones has two such cards he showed off proudly.

Jones gravitated toward others who shared his passion. There has been a Post Card Club of Oswego County since 1980. The club has members who meet to trade and sell postcards among members and sometimes put on a program.

In 2000 he volunteered to accept the presidency on a temporary basis. He remains president today.

Jones’ collection now includes albums of postcards detailing the history of the communities of Phoenix and Oxford, a village southeast of Cortland and major athletic stadiums. His enthusiasm for collecting has been contagious. His late wife Lora developed a collection of postcards detailing holidays of years past. “I think it’s a great hobby as I say if you like history,” he said.

The future of his collection and for the hobby itself seems uncertain. As new generations turn toward online and digital past times, the attraction of old postcards may be waning.

“It’s been the older generation that seems to have had the interest to keep that kind of thing going,” Jones said. “I’d like to see it preserved. What’s going to happen to these one day? I don’t know. I might end up giving all these to the historical society. Who knows?”