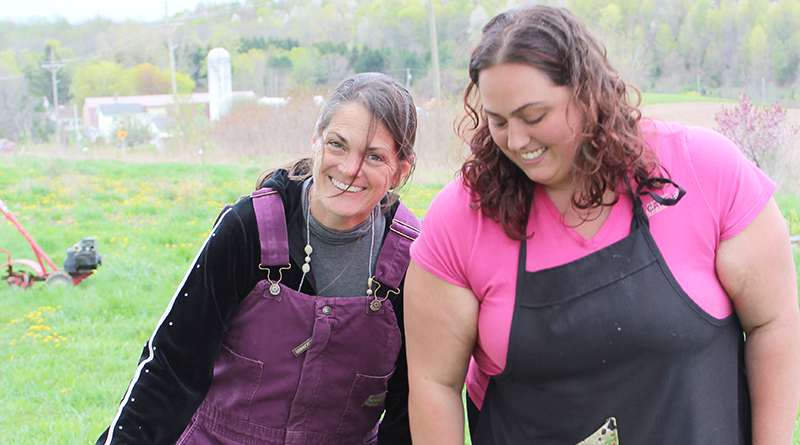 Meeting Lucille Laws at her farm in Victory, Cayuga County, makes it pretty tough to believe she was a dyed-in-the-wool city slicker from New York City a decade ago. Now operating Our Lady of Victory Farm, the 54-year-old looks pretty comfortable in jeans and muck boots.

Laws’ transition away from the city started when her daughter, Cassie, became ill. Laws felt that much of the reason behind the girl’s poor health lay in the environment in which she and her husband, Charles, were rearing their youngsters. She believes that city life and eating food that was so far removed from its sources had a lot to do with why Cassie fell sick.

As Charles also struggled with health, Laws wanted to find some way of making a living while staying home to care for him and in a place that would help her daughter recover. The couple bought a 25-acre former dairy farm in Victory because farming seemed to meet all their needs.

Laws looks back at her lack of knowledge and laughs now, but it wasn’t very funny when she started out. Several people gave her animals to help her get the farm going despite her limited knowledge of farming.

Helpful neighbors and Cornell Cooperative Extension workshops have helped her learn how to take care of her animals, which now include 24 head of beef, three sows and their piglets, a flock of chickens, ducks, a goat and more. Just as Laws doesn’t represent a typical farmer who grew up in the profession, misfits seem to find a welcoming home at Our Lady of Victory. They include Lucy, a calf rejected by its mother who now roams the farm like a puppy, One-Eyed Sy, an unfortunate cat, and a donkey no one wanted.

Whenever she encounters a farm quandary, she doesn’t hesitate to ask others. Or, she lives up to her nickname, “Mrs. Google” and searches online for answers.

Laws partners with Becky Burger, her neighbor and friend who owns 200 acres. When Laws’ husband experienced a rough patch in his health, Burger took Laws’ pigs to her farm, Horeb Farm, which helped decrease the chores on the farm. Though Charles is doing better, Laws and Burger agreed to continue the arrangement since Burger’s farm is well suited to raising pigs.

Laws raises nearly all the family’s food. Their daughter, Cassie, moved back to the farm to help care for her father and the farm. The women pasture their Angus beef and pigs and eschew antibiotics and hormones to grow a natural product.

The birds live freerange, which Laws feels provides them with a happier, healthier life and produces more nutritious meat and eggs.

The farm is doing well enough that Laws opened a Our Lady of Victory Co-op Store on the property June 17. Using a 20-by-20-foot renovated building on the farm, she offers products from local farms, including maple syrup, honey, bath products and her own freezer beef and pork.

“This is what made America great and what will make it great again,” Laws said.

A devout Catholic, Laws credits God with her ability to undertake a farm and store, especially considering her lack of knowledge about agriculture. She had worked in the restaurant industry for many years and understands operating business; however, raising crops and animals represents an entirely different effort.

“I have a great devotion to the blessed mother and feel she has prayed and interceded for me,” Laws said. “God gave my husband another chance. He was never supposed to walk and he had 28 more years of walking.”

She hopes that her farm will help people return to eating more natural, locally raised foods.