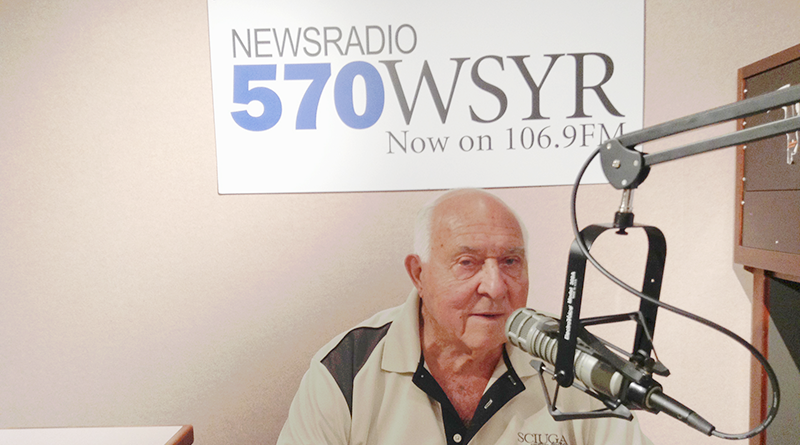 Sal Sciuga Sr. has had many jobs over the years, but the one for which he is best known in Central New York is the one he never expected to take on.

“I have had absolutely no training to do radio,” said Sciuga, “and never in my wildest dreams did I think I’d be on the radio.”

In addition to owning Sciuga Custom Builders in Solvay, Sciuga is one of three co-hosts of the Home Repair Workshop show on NewsRadio 570 WSYR and 106.9 FM.

Sciuga, 84, has joined fellow contractor Steve Khanzadian and plumber Mike Cannavino to field homeowners’ questions live on-air most Saturday mornings since 1993. The trio has covered everything from painting and patching holes in the wall to consumer fraud.

“There are more people that know me from the radio than from doing work for them,” Sciuga said, “and we’ve been in business a long time.”

After nine years as a social studies teacher at Grant Middle School in Syracuse, Sciuga started Sal-Nic Contractors in 1966 with a relative, Nicola Grillo. Nic and Sciuga amicably parted ways, but Sciuga continued as a contractor, bringing aboard his sons, Tom and Sal Sciuga, Jr. The company rebranded as Sciuga Custom Builders in 1991, and “Babe” — as Sciuga, Sr., refers to Sciuga, Jr. — is now president of the company. His daughter, Dana Sciuga Bakowski, is customer selections coordinator.

The Home Repair Workshop has been intertwined with Sciuga Custom Builders since its beginning. Sciuga’s son, Sal Sciuga, Jr., sold a house to Alan Furst, former program director for WSYR. Furst invited Babe to appear on a radio show. More reserved than his gregarious father, Sciuga, Jr. declined the opportunity, but he volunteered Sciuga, Sr., for the guest spot.

“It was very easy to do,” the elder Sciuga said.

After reprising his appearance the following Saturday, WSYR asked Sciuga if he’d like to make it a weekly venture. He turned them down.

“I work on Saturdays,” said Sciuga. “Saturday is catch-up day [for] when you forgot to do your homework during the week.”

But once he learned it would be a paid gig, Sciuga signed on. He was joined by Steve Khanzadian and Mike Cannavino. For about a decade, the show was sponsored by Wegmans’ now-defunct home and garden store, Chase-Pitkin. When Chase-Pitkin was shuttered in 2005, the Home Builders Association of Central New York picked up the show for the next decade before selling it to the Home Repair Workshop hosts.

“[They said] if we could sell the advertising ourselves, we could stay,” Sciuga recalled.

While Sciuga and crew must sell ads to pay for their airtime, the name recognition he has received from the Home Repair Workshop is the best advertising he can get.

“I have people who say, ‘I know — I recognize your voice,’” Sciuga said.
While many audiophiles and news junkies have shifted their attention to satellite radio and podcasts, radio listenership remains strong.

According to the Pew Research Center’s 2015 “State of the Media” report, 91 percent of Americans aged 12 and older said they had listened to traditional AM/FM radio in the past week.

News, talk and information radio stations such as WSYR are surging in popularity as well. After country music, news radio is the second most popular genre in the nation. Nielsen reported an uptick in news radio listenership after the 2016 election, and Americans tuned in to a combined 11.5 million hours of news radio in 2016.

On the air —Sal Sciuga, Sr., hosts the Home Repair Workshop with Steve Khanzadian and Mike Cannavino from 8 to 9 a.m. each Saturday on WSYR 570 AM or 106.9 FM.

The format is gaining popularity with millennials (ages 18 to 34), but listeners over 50 make up the lion’s share of news radio listeners. About 20 million boomers turned their dials to news radio in the first quarter of 2017. Sciuga estimated the average age of his listeners at 45 and older.

The evolution of technology in the radio world has allowed Sciuga to broadcast from conventions in Atlantic City and Las Vegas and from his winter home in Florida. When he’s far from snowy CNY, Sciuga streams the Home Repair Workshop via iHeartRadio and calls in to chat with Khanzadian, Cannavino and Sciuga, Jr., who fills in for his father in the studio.

“As much as all the stuff we have, the radio is the easiest connection,” Sciuga said. “You turn the radio on in your car. You take your iPad and there’s 500 stations on iHeartRadio.”

The advent of streaming radio has been a boon to snowbirds and other far-flung listeners of Sciuga’s show, but the rise of technology has its downsides, too.

“Our audience can take their iPads and get a lot more information than I can give them,” Sciuga said.

However, Googling home repair how-to’s lacks the human connection that Sciuga, and his co-hosts share with their listeners.

While Sciuga continues to connect with his listeners, he is preparing for the future of his construction business. At 84, he is no longer a hands-on builder, but he still visits job sites and comes to the office daily. His son, Sciuga, Jr., and granddaughter, Dana, hold integral roles in the business.

According to Sciuga, Dana had to convince her father and grandfather to hire her. They knew the field was difficult and thought she was destined for greater opportunities.

“Finally, she sat us both down and said, ‘What is it you don’t understand? I want to work with you,’” Sciuga recalled.

Dana’s mettle was tested with a difficult, detailed project — a Parade of Homes custom model — and she took her place in the Sciuga dynasty.

“If both Sciuga, Jr., and myself didn’t show up tomorrow morning, she can run the whole business,” Sciuga says of his granddaughter. “She could show both of us up.”

As the radio show became an additional career for Sciuga, its history has always been wrapped up with the story of Sciuga Custom Builders.

“I’m a vintage person, so my story is long,” Sciuga said. “This part of it is fascinating.”