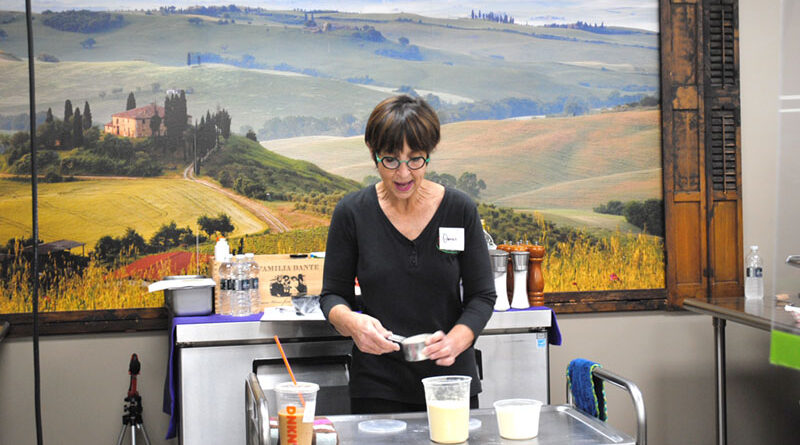 As the cooking instructor at Vince’s Gourmet Imports in North Syracuse, Donna Pascarella is able to share her lifelong passion for cooking with others.

Cooking has been a main ingredient in her life since she was a young girl, growing up on Syracuse’s north side and then Liverpool and watching her mother and grandmother cook. It enables her to keep alive the memories of her grandmother’s house and big Sunday dinners with all of her cousins.

“The house was about food,” she said in a recent interview.

To re-create those memories of grandmother cooking is the most common reason she hears from people taking the classes.

Having a career in cooking has been what Pascarella, 61, has wanted since she was at least 16.

“I always considered myself one of the lucky ones because I always knew what I wanted to do,” she said.

And what she wanted to do was to work in a restaurant and then own one. So, she went to SUNY Canton and then Rochester Institute of Technology and for the first 10 years of her career, she worked in the food service operations of various hotels. And then, she wanted to open a restaurant, so she opened one in the trendy Park Avenue neighborhood of Rochester and ran it for four years, before returning to the hotel business.

Eventually, Pascarella moved back to the Syracuse area, currently residing in Jamesville, and worked at a variety of food-service related jobs at Syracuse University, her last position there being the catering manager at the Dome.

About three-and-a-half years ago, she saw that Vince’s was looking for a new cooking instructor, so she applied and got the job.

When the pandemic hit and there were no in-shop classes, Pascarella helped around the store, until owner Sam Mondello suggested making videos of her cooking demonstrations and uploading them to social media. She would do a recipe and email it to people who were interested.

The shop was started 15 years ago, by Mondello and his father-in-law, Vince Lombardi.

“People were home and they were cooking if they weren’t ordering from restaurants,” she said.

Since this past spring, with individuals getting the COVID-19 vaccine, she noted that people are starting to go out more, get together with families and there’s a renewed interest in cooking and in her public and private classes.

The virtual demos have ended and the in-person classes take place in a large corner of the gourmet shop. The area is lined with long stainless steels tables, and a large mural of a countryside adds ambiance to the area. For public safety reasons, large sheets of plexiglass are suspended between each table.

Having it inside Vince’s shop is an asset, she said. Students get a discount, they can bring their own adult beverages to class, they get to eat what they make, they meet other people and they can leave the mess behind, Pascarella joked.

“It’s a fun, different thing to do and you learn something,” she said.

During a fettuccine-making class a couple of months ago, Steve Lutwin of Syracuse had come to learn how to make pasta. Lutwin said he and his wife have tried to make pasta a few times, and “it came out all right, but I wanted to see how an expert does it.”

Because of his interest, his daughter, Erika Lutwin, had given him the class as a Father’s Day present and was attending it with him.

Another student, Laurie Walter, traveled from Auburn to take the class.

“I never learned how to cook,” she said. “So I took a class, her gnocchi class and it was so much fun, and it came out so good, I said ‘I gotta come back.’”

And Baldwinsville resident Diane Branish said she loved watching the videos and since she’s Italian, she thought the class would be fun.

The foods Pascarella and the students prepare show quite a range — different kinds of pasta, chicken dishes and desserts.

A lot of the recipes come from both Pascarella’s and Mondello’s families, but she’s become so adept at cooking over the years, she’ll create a new recipe or modify one. Because she has repeat customers, she wants to keep her classes fresh. So, she reads a lot and watches cooking shows.

“I love to do it. I continue to learn,” she noted.

In her private classes, she can work with students if they have something in mind that they want to make. For example, a group of friends had taken a recent class and they wanted to create an Italian pork dish.

A glance at the menu of classes being offered recently bears out Pascarella’s statement — chicken riggies and cannoli take-home meal; peach, amaretto and raspberry icebox cake and filled cannoli; fresh ricotta and lasagna from scratch; spinach ravioli and shrimp and sweet corn risotto with pancetta.

Are your mouths watering yet?

To learn more about the classes taught by Donna Pascarella, visit www.vincesgourmet.com and scroll down to Cooking Classes and Events for all the information and a registration form.

Photo: Cooking instructor Donna Pascarella teaches a fettuccine-making class at Vince’s Gourmet Imports in North Syracuse. During the pandemic, she created several cooking videos that were emailed to clients and posted online.