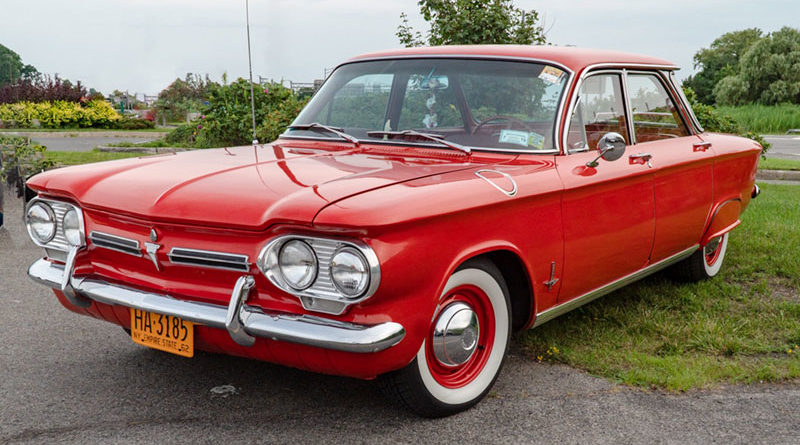 It wasn’t dolls that made Amy Bamerick’s eyes light up as a little girl — it was cars.

And not the kind you find in small packages in a toy aisle. Real cars. Classic cars. As early as 4 years old, Bamerick remembers being in her absolute glory, pretending to drive, shift and steer all the old cars that filled a big field on her mom’s friend’s property in Hannibal. It was love at first sight, and a love she never outgrew.

Owning a classic car was something Bamerick had always wanted but never expected to happen due to the expense — she was sure that, with her budget, they’d be unaffordable. Yet, something told her to take a picture of the “for sale” sign she saw on a Chevy Corvair she had spotted at the 2017 Syracuse Nationals. The model was early ‘60s.

“All they could say is it’s too expensive and I couldn’t get it,” she said.

Well, that particular one didn’t work out — it had too many problems and the cost was outside her limit. However, the day after she ruled out that car, her Corvair connection, Lou, called her about a 1962 Corvair Monza Series 900. It was in Central Square.

“I pulled up to it and it was perfect. The interior was like brand new,” Bamerick said. “The only thing I hated was the ugly blue color,” which she eventually had painted red.

“I can tell you’re going to really love this car,” Bamerick said he told her. 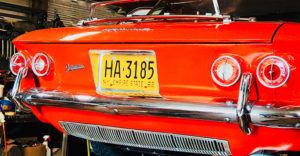 “Everything for this car had come so easily and so cheaply. Everything just fell into my lap,” said Bamerick, who believes her mom, who died in 2007, had a heavenly hand in all of it — from leading her to Miss Daisy (a name her mechanic had given it) to insuring the car in one day’s time — something she was told never happens. Her mom was always supportive of her passion for old cars.

The Eastwood resident takes her “girl” out for a spin far more than most classic car owners, who rarely drive them at all. In fact, in the three years she’s owned Miss Daisy, she’s 300 miles short of having driven her 10,000 miles. To be clear, Miss Daisy is stored each winter; she’s driven on average five months a year. During its first year with Bamerick, the car was driven only three months — that’s a total of 13 driving months.

“All summer, it’s just her and I. We drive everywhere together,” Bamerick said. And when they take to the road, they mean business. Bamerick said over the summer, she took Miss Daisy for a test drive after replacing the carburetor. “She flies! Mind you, when I drive her on the highway — I go 75. She just loves to drive! The car is air cooled, so when she’s sucking in air, it’s making the engine work that much better. The carburetor was working perfectly,” she noted.

Bamerick said when Miss Daisy was driven in the 2018 Corvair Recalls Obstacle Course Race, it came in second fastest in the entire history of that event. 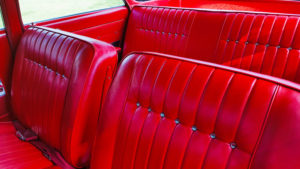 Speaking of history, one time when Bamerick was at a NAPA store buying air filters, she learned her car once belonged to an employee’s parents. She explained it originally came from Pennsylvania, to which he agreed.

His parents had gone to Palmer Chevy in Fulton. They wanted a black car with red interior, but the dealership didn’t have one. However, there was a dealer in Chambersburg, Pennsylvania, that did. The employee said his parents, who are now deceased, drove their VW bug to New York’s neighboring state and traded it in for the Corvair.

“I would have loved to show it to them,” Bamerick said. 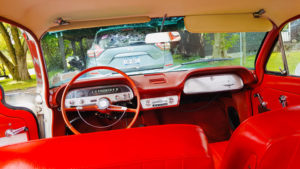 “Corvair Amy,” as her car guy friends call her, is not one to leave Miss Daisy on the lift and walk away. She herself admits she’s not by any means a mechanic, but she does like to help in whatever capacity she’s able, and always under supervision.

Bamerick also likes to tease the 20-somethings when showing them her car: “I always trick them and ask, ‘Do you want to see the engine?’”

She then walks them to the front and opens up the trunk to which they’ll ask where it is. “I point to the wiper motor and say, ‘Right there. This car was a prototype for an electric engine.”

Jaws drop and they say, ‘No way!’” She laughs, brings them to the back of the car, and shows them the real deal. “They are blown away by how different a car the Corvair is.”

And when Bamerick brings Miss Daisy to car shows, attendees — typically men — approach her male counterparts for information on the Corvair, even when she’s standing right there. Bamerick said: “When my friends say, ‘Don’t ask us, ask the owner, it’s Corvair Amy’s car,’ their jaws drop and they say, ‘You own a classic car?’ Almost like I broke into some secret men’s club.”

As American actress Alexandra Paul once said, “The cars we drive say a lot about us.” Bamerick for sure breaks the mold when it comes to conventional classic car ownership.

‘Miss Daisy’ at a Glance

— The Corvair Monza Series 900 had all-vinyl interior trim, back-up lights, deluxe steering wheel, glove box light, wheel covers, and folding rear seat. Extras included a push button AM radio, padded dashboard (typically they were metal), carpet, and armrests with ashtrays in the back (the 500 and 700 models had vinyl floors and no armrests). The 900 model also came with bucket seats, which very few 900 series cars had. Instead, they came with bench seats.

— The Chevy Corvair Monza 900 cars made between 1960-64 are called EM (early models); those manufactured from 1965-69 are called LM (late models). The LM body style was actually the prototype for the Camaro.

— Miss Daisy has a 6-cylinder 80-horsepower rear engine with an automatic Powerglide transmission.