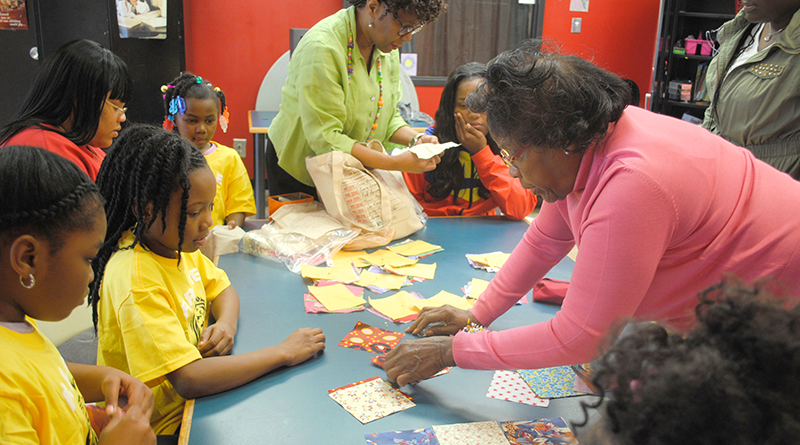 Dottie White selected for the annual award. At 81 years of age, she continues to be engaged in volunteer work

There’s little doubt as to why Dorothy (“Dottie”) White was selected as this year’s Onondaga County Senior Citizen of the Year.

The Syracuse resident embodies the theme of the annual celebration, “Engage at Any Age,” and she has lived that message for nearly all of her 81 years.

White was acknowledged at a celebration luncheon for Onondaga county Seniors held in May in honor of Older Americans Month.

“I observed my parents helping others in the community, and it’s just a part of my everyday life,” she said.

She’s been a nurse with the Veterans Administration and the U.S. Army Reserve Nurse Corps. She volunteers with her church, where she has helped make more than 1,500 pillowcases for nursing homes and hospitals. She’s been involved in teaching young people the art of quilting for more than 10 years.

A member of the Zeta Phi Beta sorority, which does a number of youth-related activities, she worked with the Elmcrest Children’s Center in their horticulture gardening programs for 13 years. She also puts her gardening skills to use as a member of the Men and Women’s Garden Club of Syracuse, the Men’s Garden Club of America, the American Rose Society and the Syracuse Rose Society. With this latter group, she helps tend the E.M. Mills Memorial Rose Garden in Syracuse’s Thornden Park.

This idea of giving to others was something that her parents, Allen and Jessie White, instilled in their six children, growing up in Greenwood, S. C., she said.

Upon graduating from Tuskegee University, she became a registered nurse. She went on to earn a degree in personnel management. She went to work at various VA hospitals, including those in Tuskegee, Ala., Baltimore, Richmond, Pittsburgh and Hampton, Va. She was transferred to the Syracuse VA in 1984, and stayed at that facility until retiring in 1995, after a total of 31 years.

“My brother was in Vietnam, and I felt that there were nurses to help in the event that he needed help. And I felt an obligation to do the same thing for someone else’s brother, sister, uncle or aunt,” she remarked.

She remained with the corps for 30 years.

Through the Sankofa Piecemakers Quilting Group, she met Ossie Edwards, a librarian with the Onondaga County Public Library system, and the person who nominated White as the county’s Senior Citizen of the Year. About 12 years ago, Edwards was working at the library at the Southwest Community Center and wanted to teach the kids there the basics of quilting and how to use a needle and thread. White volunteered to help her out. To this day, the pair continues to meet with the kids at the center on Wednesday afternoons.

“She’s just such a giving spirit,” Edwards said of White.

One of the first projects the group took on was an Underground Railroad Quilt. “It was a teaching moment,” Edward said, “to take the fabric and convert it to something really beautiful.” It took two years to finish, and upon completion, they presented it to White.

But it might not just be sewing and quilting that White and Edwards are teaching the youth. There are life lessons. White said that these skills can also teach leadership, fellowship, respect for each other and help them focus and learn to pay attention to detail.

With her church group at St. Alban’s Episcopal Church in Syracuse, White has been involved in their pillowcase ministry. She began with providing pillowcases for every bed at the former Castle Rest Nursing Home, and over the years, the group has provided cases for nearly every nursing home or hospital in the area and even as far away as Oriskany, White said.

“I enjoy doing these things because I like a person in a nursing home to know that they are not forgotten,” she said.

But she is quick to add that those in the nursing homes or the youth she teaches are not the only ones benefiting from her work.

“Being a volunteer helps other people. It helps you also. It keeps you engaged. A mind engaged, that’s active, stays active,” she said.