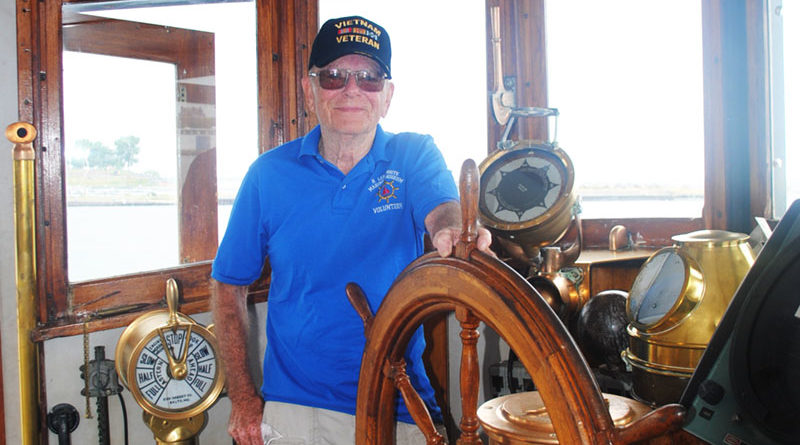 Vietnam vet receives the Volunteer of the Year award from the H. Lee White Maritime Museum

He has served in Vietnam; he’s been an industrial arts teacher; and he retired from the Oswego School District, after handling its printing for more than 20 years. Today, Mike Brown’s experience inspires his volunteer work with the H. Lee White Maritime Museum in Oswego. He has built several of the displays inside the museum; gives tours of the famous U.S. Army LT-5 (Large Tug) in the Oswego Harbor; and has been key in restoring it, nimbly climbing up and down the vessel’s narrow steps and ladders between its decks. The LT-5 was vital in the D-Day invasion in Normandy in 1944, and shot down a German fighter plane.

A: It’s an honor to be recognized. Merc [Museum executive director Mercedes Niess] and the board of directors go all out for the volunteers because the volunteers put a lot of time. It’s quite an honor.

Q: How long have you been a volunteer at the H. Lee White Maritime Museum?

A: About five years now.

Q: What prompted you to volunteer at the museum instead of with another organization?

A: I retired in 2012 from the Owego City School District. My wife, Jeanne, was already retired. She suggested I come down here and volunteer.

Q: What do your duties involve?

A: Right now, it’s mostly working on the LT-5, trying to keep it in shape — scraping and painting. It’s going to need some more painting after this winter. I just finished doing the life rings. I repaired all the nicks and dent and mounted new rope to them. I hand painted the lettering on them. Last year I finished up painting the whole superstructure and hull and decks. That took three years to do. Just keeping things shipshape on it. I have to replace all the fenders on it. It was banging against the piers this spring and broke a line. The ship does belong to the [Oswego] Port Authority. They give it to us to display it as long as we keep it up. I made a canvas cover for the stack two years ago. It keeps the snow and rain out.

Q: What’s your favorite part of this work?

Q: You’re a Vietnam veteran, having served two tours with the Navy Seabees?

Q: With this in your background, what has it been like to work on this World War II vessel?

A: It’s kinda funny. My first tour over in Vietnam, we took a World War II troop ship from Oxnard, California, up to Seattle, then Seattle to Japan, Japan to Okinawa and Okinawa to Vietnam. It took 31 days. It was the U.S.S. Blatchford. It had bunks stacked 5 high. There were about 1,000 guys on the ship. Then to cut back and be working on a World War II vessel when I retire in my 70s, it’s kinda déjà vu. It’s really kinda neat.

Q: You restored the Browning M2 50 caliber machine guns. How did you research that to do it accurately?

A: I went online and bought the plans for $100. So I got this whole booklet. It gave you the schematic. Originally, there was a platform that extended out over the lower deck. You’d shoot from that. I got a hold of some dummy ammunition.

Q: What are some of the things that people might find most interesting when you do the tours?

A: The older folks want to know about history. Kids — I like working with the kids and you can get them laughing.

Those interested in touring the Museum or the LT-5 or in volunteering, like Mike, can visit www.hleewhitemarinemuseum.com or call 315-342-0480.