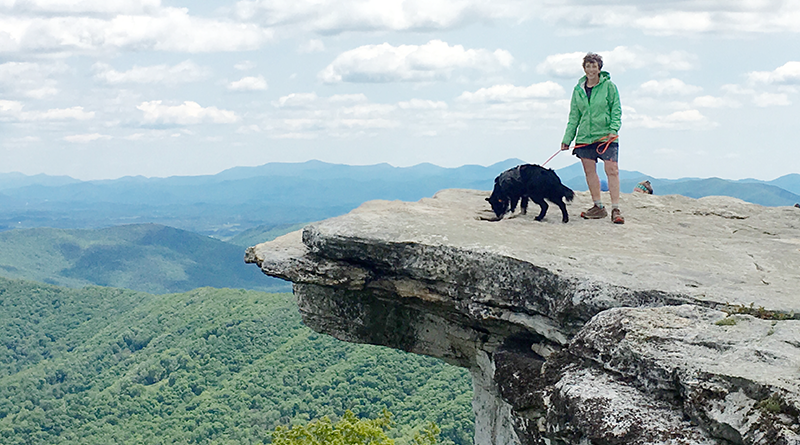 How I survived more than three months — and 1,266 miles — on the Appalachian Trail

I recently attempted to hike the entire Appalachian Trail (AT), a 2,189-mile jaunt from Georgia to Maine through the forests and mountains of the eastern US. Although I finished only 1,266 miles this year, waylaid by a broken foot at the end of June, I had an amazing experience.

The AT was conceived in the 1920s and the first iteration was completed in 1937 — but every year brings new improvements and changes.

Benton McKaye, a forester, wrote the original plan in 1921. The first segment opened in New York state in 1923, from Bear Mountain in Rockland County through Harriman State Park to Arden in downstate New York. Earl Shaffer became the first person to hike the entire trail from start to finish in one season in 1948. The first woman hiker was Emma “Grandma” Gatewood in 1955. She was 67 years old, wore Keds sneakers, used a shower curtain as protection from the elements and carried a homemade sack slung over one shoulder. Now that is one tough woman!

I can’t say there was any one pivotal deciding moment that sparked my desire to hike the AT. I always had a bit of wanderlust. At age 5 I rode my bicycle five miles to the next town, where my mother’s eagle-eyed friend spotted me and hauled me back home. I undertook various long distance bicycle trips in my teens and 20s, before bicycle trekking achieved its current popularity.

When I was 12 or 13, I strapped on a backpack for the first time at Girl Scout camp. I immediately fell in love with backpacking. When my counselor told me about the AT, I decided that I would have to try it someday. Now that my kids are grown, and as I observe the mortality of some of my contemporaries, I decided that “someday” was now.

Fortunately, backpacking gear has vastly improved since my first experience. One year ago I updated my equipment and began my trip plans. Several reconnaissance trips last fall revealed some gaps in my tent-pitching technique, resulting in at least one episode of becoming drenched in ice-cold rain. I’m glad I learned that lesson before the big trip.

On March 13 I embarked from Springer Mountain in Georgia accompanied by my border collie Boomer. Though technically I was alone, there were scores of other hikers, especially at first, so I was seldom alone for long.

On the very first day I managed to do several things I had vowed to avoid: I lost something, broke something, and fell. Fortunately it was a slow motion slide into the mud, cushioned by my backpack. I spent the first night at Hawk Mountain campground, and was serenaded by a great horned owl parked just above my tent.

What did I carry? The big three for any long distance backpacker are tent, sleeping bag and backpack. My tent was a lightweight Zpacks brand cuben fiber two-person tent, with plenty of room for me, the dog, and my gear. At first Boomer was not a fan of tenting and slept outside. But once we hit cold and rainy weather, I dragged him inside and he soon learned that the tent was a cozy den. My sleeping bag was a wonderfully soft and fluffy down bag rated to 20 degrees — which means it will keep you alive if the temperature dips to 20, though not necessarily warm. I never really got cold at night, because I used a few secret ingredients: hat, down pants, puffy jacket, booties, and Toasti-toes chemical toe warmers. I hauled all my gear in a 60-liter ultralight Gossamer Gear backpack.

Other gear included a cooking system, clothes (one change of clothes plus jacket, hat, gloves), raingear, an inflatable sleeping pad, first aid kit and toiletries. And, of course, water and food. I started with a Sawyer filter to purify my water. It’s small, lightweight, and provides immediate clean water. But you have to sleep with it when the temperature is below freezing, and fiddle with cleaning it by backwashing it. So later I just went with water purification drops.

As for food, I never carried more than five days worth. There are plenty of places along the trail to resupply. There are towns with grocery stores (the best), but also dollar stores, convenience stores, campground stores, hostels with stores, and outfitters. There is also the option to have packages sent to post offices or businesses along the trail. Fancy dehydrated backpacking food is nice, but it’s expensive and not always available. So I ate a lot of Clif bars and other granola bars, oatmeal, raisins, peanuts, peanut butter, crackers, jerky, cheese, chocolate and dehydrated foods that could be reconstituted by adding water: mac and cheese, pasta side dishes, couscous, soup, etc.

I sometimes stayed in lean-tos along the way. The Greater Smoky Mountain National Park rules stipulate that hikers on the AT must sleep in shelters unless the shelters are full. (That’s the only place Boomer didn’t hike because dogs are prohibited In GSMNP.) But I actually preferred sleeping in my tent, which was just as comfortable, more private and quieter. Along the way I stopped every few days at hostels or hotels, which provided an opportunity to shower and do laundry.

One aspect of AT culture is the trail name, a nickname used by hikers. I ran into folks who went by such monikers as GPS, Slim Rims, Tumbleweed, Mowgli, Joker, Scooter, Bald Eagle, Optimistic Dreamer, and — my favorite — Sphagnum P.I. I was eventually dubbed Whisper, because my well-behaved dog convinced someone that I was a dog whisperer. While I am not a Cesar Milan fan, I appreciated the sentiment.

Boomer carried a pack with his food, his sleeping pad, and a warm jacket. He only carried water when it was hot and a long distance between water sources. He loved the hike because he loves people and loves the outdoors. He was never injured, his paw pads were never scraped, and never got tired before me. Only twice did I have to help him over rocks.

Every so often I would luck into trail magic — unexpected gifts of food, water, and supplies provided by volunteers along the trail. Sometimes it was as simple as a baggie filled with snacks. A few times I encountered elaborate cookouts of hamburgers, hot dogs, pancakes, and/or omelets.

There was plenty of wildlife. I saw 13 bears — one while riding in a shuttle in the Smokies, one nuisance bear near Thunder Ridge Shelter (that one fortunately was frightened and retreated when my dog barked), and 11 non-confrontational peaceful bears in Shenandoah National Park. Other wildlife included two wild hogs, deer, raccoons, porcupines, snakes, owls, songbirds, raptors, spiders, and insects.

The prettiest spot? I’d have to vote for the Smokies, and I hope to revisit them when it’s warmer. Camping when it dropped down to 17 degrees F. was a challenge. But that was the only place in the southern part of the Appalachian Trail, in my opinion, as pretty as New York state’s.

Because I broke my foot, I hiked until just shy of the Delaware Water Gap in Pennsylvania. If I have the opportunity to finish next year, I’ll be sure to provide a part two to my adventure.