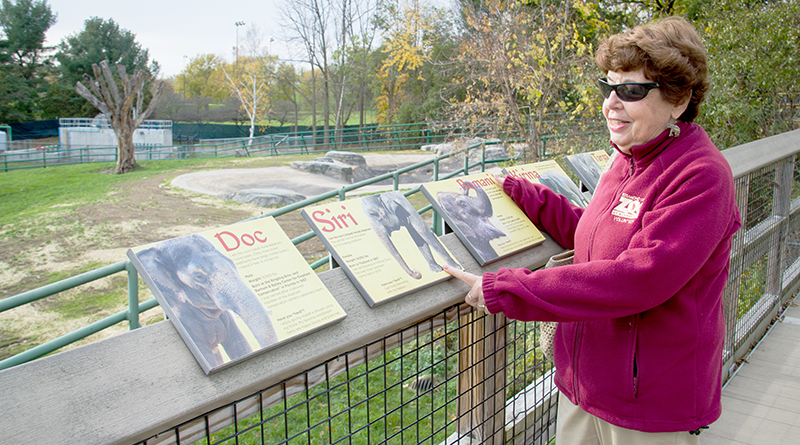 Ellenrose Galgano has been a zoo regular for as long as she can remember. She was raised in downstate New York, where her passion was first cultivated.

“I grew up on the Bronx Zoo,” Galgano said. “My grandmother would take me. We used to go almost weekly — get on the bus with grandma and go to the Bronx Zoo. So, I was always a zoo lover.”

Galgano continued that tradition when she came to Syracuse University in 1970. She was studying to become a teacher, but in her spare time she would find a way at the Rosamond Gifford Zoo, by whatever means necessary.

“When I was in college, I didn’t have a car. I would either befriend somebody who had a car and would like to go to the zoo or take the city bus up to the zoo,” Galgano said. “Then when I graduated and got my own car, I just started coming here frequently.”

She would spend part of her weekends at the zoo, admiring the animals. Soon after, Galgano said her “lucky day” arrived.

“When I started teaching, one of the other teachers was a volunteer here and saw me at the zoo all of the time and said, ‘You should stop just coming, you’ve got to volunteer.’ So that’s how I got started,” she said.

What began as a small investment of time soon became much more. Galgano is now considered a fixture at the zoo. She’s a tour guide, member of the volunteer council, the volunteer liaison to the Friends of Rosamond Gifford Zoo board, and a teacher at the zoo. All told, Galgano says she spends about 200 hours at the zoo ever year.

“There’s not a person at the zoo who doesn’t know who Ellenrose is,” said Ted Fox, director of the Rosamond Gifford Zoo.

Fox, who started at Rosamond in 1991, says he can remember Galgano’s presence for nearly as long as he’s been there. Rosamond enjoys the support of hundreds of volunteers, though few of them have been there as long as Galgano. But Fox says Galgano stands out for other reasons.

“The passion that she has for the zoo, what it brings for our community and the animals in particular,” Fox said. “It’s easy to get people who are very interested in the animals and passionate about that, but not who can instill that passion and respect in others that Ellenrose does.”

Although Fox says Galgano has been involved in nearly every facet of the zoo, he says her forte is as an “ed guide.” Education volunteers complete a course to prepare them to further the zoo’s mission of public education — giving school tours, working on educational programs and interacting with visitors about the exhibits. Fox says Galgano’s academic background serves her well in the position.

“If you’ve had the experience of walking around the zoo with her, she has a very unique way of describing and talking — it draws you in and gets everyone excited,” Fox said. “My favorite thing is to watch her with a group of children. They are so interested in what she has to say.”

Galgano says that’s why volunteering at Rosamond is such a natural fit for her. Education and animals are her two passions. And it shows. On a recent tour of the zoo with Galgano, she spoke with an ease and depth of knowledge that would suggest her formal training was in zoology. Clad in her Rosamond jacket and pair of elephant earrings, she captured the attention of the families around her at the exhibits as she went into detail about each animal and their history at the facility.

“She’s one of the most trusted and knowledgeable people at the zoo,” said Janet Gramza, Rosamond’s communications director. “It’s like such a huge part of her life.”

Galgano is often asked why she dedicates so much of her time to the zoo. She says it was an important part of her childhood, but more importantly, it’s the impact.

“I think zoos have an important message to get out to the public,” Galgano said. “The wild is shrinking. People are saying ‘well, these animals should be out in the wild.’ The wild isn’t such a great place anymore. Animals are competing for smaller habitats and for food. So zoos have a role here.”

Zoos like Rosamond are now active participants in saving endangered species through captive breeding. And zookeepers are also sharing what they learn about the animals under their care with those who are charged with watching after their wild counterparts.

“You know, people used to think of zoos as recreation,” Galgano said. “Now they’re so much more. They’re conservation, they’re education. While our mission is still recreation, and we’re having fun doing it, we’re making a difference.”

The animals themselves have an important role to play in educating the public about those threats, Galgano says. Since most people will never encounter a lion or elephant in the wild, these animals act as ambassadors for their species.

“You make that connection when you get close enough so you care about things you know,” Galgano said. “We say we like to bring you close enough to care.”

This summer, Rosamond was able to raise $6,000 for Asian elephant conservation efforts, like combating poaching.

A lot has changed since Galgano arrived at Rosamond for the first time as a college student in the ‘70s. Back then, the zoo was owned by the city and Galgano said Syracuse did not have the proper funds to improve it.

“In 1982, they closed the zoo because it was just becoming so run down,” Galgano said. “It wasn’t a good place for animals. It had fallen into disrepair.”

Control of Rosamond transferred to Onondaga County, which completely renovated the facility and reopened it to the public in 1986. Galgano said the zoo was vastly improved, with bigger spaces for the animals — like the elephant enclosure. What was once a one-room exhibit for the zoo’s elephant has grown to 4.5 acres with seven elephants. The upgrades eventually gained Rosamond a membership with the Association of Zoos and Aquariums. Only a small margin of the nation’s zoos and aquariums are on the prestigious list, which is earned by maintaining quality care for animals and visitors.

But Galgano has not enjoyed all of the changes. Regulations have limited the public’s ability to engage with the animals.

“When I started volunteering here, we were giving elephant rides,” Galgano said. “Volunteers were able to help with bathing the elephants. We used to do public pictures with elephants. Now, we can’t even occupy the same space as elephants.”

Galgano says while she understands that the changes were made to protect both the animals and the public, she misses the interaction, especially with the elephants, her favorite animal.

Where My Heart Was

When Galgano is not pouring her time into Rosamond, she’s at zoos elsewhere. Whenever she travels, Galgano says the itinerary must include a visit to the nearest zoos. She’s been to facilities all across North America, in Europe, Australia and on an African safari. But there’s one zoo that holds a special place.

When Galgano was ready to leave her career in public education, her colleagues knew exactly where to host the retirement party and so did she: Rosamond.

“They knew that was where my heart was,” Galgano said. “It’s an honor to be at a zoo like this. I’m proud of this facility.”

Galgano shares that pride with visitors at Rosamond each day, and Fox says it’s palpable.

“Ellenrose always has a presence of joy and excitement of just being at the zoo,” Fox said. “Even if it’s a time where there might be no animal [in the exhibit] or when the weather isn’t so great or the kinds of things that can bring down anyone, Ellenrose always seems to rise above that and be glad to be there and be glad to interact with the visitors and talk about the animals that live there.”

Although she’s retired now, Galgano is still able to bring classes of students to Rosamond as a substitute teacher. They affectionately refer to her as the zoo lady or Mrs. Zookeeper. It gives Galgano, who doesn’t have children, the opportunity to share that love of zoos with the next generation, similar to what her grandmother offered her. And occasionally, it sticks.

“One of the things I’m most proud of as an educator and a lover of the zoo is one of our zookeepers was one of my former first grade students, Seth [Groesbeck]. So as a 6 year old, I brought him here to the zoo. Hopefully, I inspired him.”