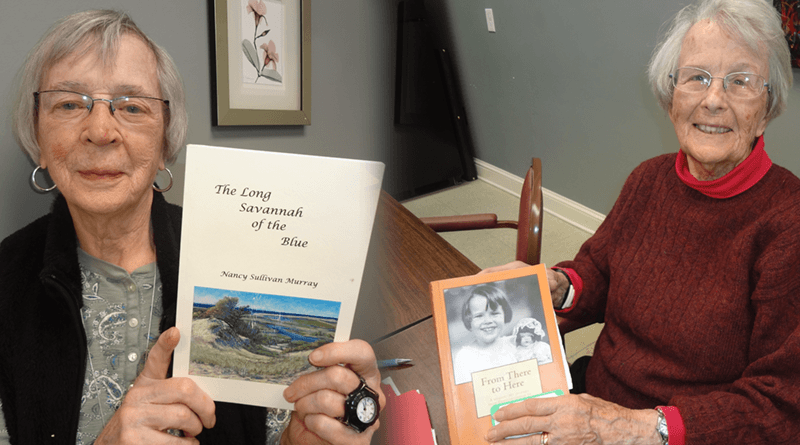 New writers, some in their 90s, flourish in writers’ class at Nottingham

Kay Keller had never written before.

“I’m not a writer! What would I write?” she said when a friend asked her to come to a writing class at the Nottingham Senior Living Community.

Now Keller, who is over 90, knows exactly what to write. Recently, as her eight classmates and her instructor leaned forward to listen intently, the retired chemist read her story about a trip to the Grand Canyon. When she finished, the reactions around the table were spontaneous and genuine.

“She’s always great on details!” marveled one. “I’ve been there, too, but not the way you have,” said another.

The instructor, Eileen Schell, joined the chorus of compliments and then followed with her critique.

“It’s interesting how, as you descend into the canyon, the experience changes, the light changes, you describe heat and the feeling of going down the canyon,” Schell said to Keller. “And you focus on you and the mule — a good choice. It works because it’s almost like a solitary experience.”

Here in Schell’s weekly writing class, the students, all in their 80s and 90s, know a thing or two about experiences, solitary and otherwise. Now, they re-create those observations in their own stories, poetry, and plays, and along the way, they form new friendships around the writing table.

Schell, a Syracuse University professor of writing and rhetoric, has been teaching the class for 19 years. She initially connected with the Nottingham community through her S.U. course on “Life Writing,” in which she paired each college student in the course with a senior resident from the Nottingham to share and write narratives across the generations.

After the one-semester class was over, the Nottingham participants clamored for Schell to stay on and work with them on their writing.

Over the years, Schell has found the class to be part about the writing process and part about the experiences of life’s changes. She has listened to childhood memoirs, war veterans’ stories, travelogues, and deep expressions of loss and relocation.

”For me,” Schell remarks, “a big part of this is learning how to teach a population who are in transition. How people got here is a big story line.”

Schell is exploring those themes in a book project on writing and aging, in particular examining both the benefits of writing one’s life story and being part of a writing group of peers.

Reflecting on seniors in general, Schell observes, “We rely on our peers through life, and that structure starts to fade.”

Fortunately, however, in this class, connections flourish rather than fade. Participants say they value their interaction with peers and bond through creative expression. Or, as student Sally Wilbur puts it, “We share feelings.”

Schell says the class appeals to several levels of writers. Some are former professors who were writers in their discipline and want to keep their hand in writing; some have always wanted to write and now have the time; and some are new residents who simply want to meet people with common interests.

“Many begin writing memoirs,“ Schell says. She has heard particularly memorable narratives about life in the Adirondacks, a Bronx childhood in a large family sharing a three-room apartment, and World War II experiences from a veteran whose memoir was crafted from letters to his wife in wartime.

Like Keller, other students tap into past travels. Rosanne Koziara, 92, recently produced a piece about a trip she took to Russia decades ago when American tourists rarely ventured there.

Some students in the class write in other formats.  Richard Harris, 90, writes comic plays coming out of his experiences and reflections on moving to The Nottingham. Describing the feelings of uncertainty that come with change, he remarks that sharing his thoughts on paper with the group makes those changes “not so frightening.”

A professional actor in the past, Harris also draws, depicting his theatrical experiences in cartoon-like pictures. Nancy Murray, 89, writes poetry, affirming that for her, “Comfort comes in verse.” Her favorite form is the Japanese haiku. Murray also hopes to start an oral history project, about which she reflects, “All our stories are sacred.”

After observing a few classes, it becomes clear that the participants have opened up to writing because Schell has gained her students’ trust and respect.  Schell values her students’ perspectives and, at the same time, encourages them to stretch, while warmly offering her thoughts on her own experiences.

“This is a very unique group,” says participant Lenore Ladenheim, “Human, down-to-earth, compassionate.” After someone reads a story aloud, and people comment, Schell will point out specific strengths as well as possible paths to further developing the narrative or one of its characters.

“She is always positive and encouraging,” Keller says. Often, when students discuss their memories, as Harris did recently when recounting a trip to Vienna, Schell will jump on it by saying, “I think you need to write that down!”

Schell’s comments revolve around writing principles that the class evidently takes to heart, judging from the stories they write:

— Develop scenes by showing rather than telling

— Think about people in the stories, including yourself, as characters, and from there get to know how to characterize them

— Think about what you most want to write about

— Think about whom you want to write for. Do you want to publish for a broader audience? Write for yourself? For your children?

Schell stresses the importance of seniors claiming their literary executorship. “I encourage people to be in control of their work. Find a way to preserve it. If you self-publish your work, there’s a better chance it will be preserved.”

Two students in the class have self-published. Murray has published a book of verse with the lyrical title, “The Long Savannah of the Blue.” Wilbur, 93, self-published an extensive memoir of her life in Turkey, London and New York. “From Here to There, A Memoir — My Journey from Constantinople to Fayetteville, N.Y.” is a 413-page volume complete with old photos, and is available on Amazon and to Nottingham residents in the Senior Living Community’s library.

Class participants also have opportunities to share their work in “Nottingham Notes,” a literary booklet that Schell helped the students create. In addition, The Nottingham has had two literary readings in the past year.

“Many residents come to the programs, and many give great feedback,” Keller observes. The readings are a validating event for both participants and audience.

Kara Gemmell, Nottingham’s director of lifestyles and recreation, remarks, “Their peers know them as a person at the dinner table or in the lounge, and then — to see them at the podium — residents see another side of them. It also encourages others to join the group.” Gemmell is working with Schell to produce another reading in May in recognition of Older Americans Month. Interestingly, the national theme for the month is “Connect, Create, and Contribute.”

For the performance, students are working on Schell’s latest assignment: “Choose a particular age in your life and describe the transformative experience that happened to you at that age.”

However well-received their writing in performance readings and publications, these writers know that their greatest applause comes in class each week — and Schell is their greatest fan. Both Schell and her students are clearly inspired by their time together.  As they have come to know each other, they are all discovering new ways to express what is inside them.

As 90-year-old Ladenheim puts it, “Coming from the world I came from, I thought, ‘What am I going to do here?’ But now, what can’t I do?”