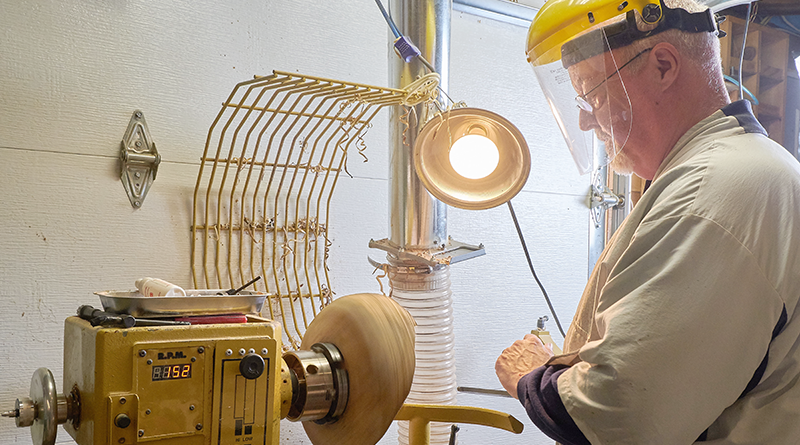 Dr. John McCabe worked at Upstate University Hospital for more than 30 years, serving as the chief of its ER and then as CEO. Nowadays the Cazenovia resident is more concerned with his woodworking projects

John McCabe has been plenty busy these days, but not in an executive’s office or an emergency room. You won’t see him crunching numbers on a spreadsheet or reaching for a scalpel. Instead, he’s more likely to be in a wood shop with chisels and carving knives.

On any given afternoon, McCabe enjoys a much quieter work place filled with hand-made furniture and wooden bowls. It’s a craft that he started to learn about many years ago from his father, and later from his next-door neighbor in Cazenovia, the late Tim Hughes.

“He was one of the best [wood workers] around, but he was so proud to tell his wife, ‘I’m mentoring a doctor,” said McCabe, 64. “That’s one nice thing about retirement. You can learn new things. It’s OK to be a beginner again.”

Physician John McCabe retired earlier in 2017 after 30 years at Upstate University Hospital, one of the region’s leading employers. He completed his medical school there and worked his way up from an emergency room physician to chief executive officer.

Early on in his career he established the hospital’s emergency medical residency program. During McCabe’s eight years at the helm, Upstate added the Golisano Children’s Hospital, opened the Upstate Cancer Center, and acquired Community General Hospital. The CEO also got Upstate University Hospital out of debt.

“When I left, I told all my co-workers, please don’t screw up because someday I may be a patient there,” McCabe said, laughing. “But seriously, I guess I can stare back from 10,000 feet away and say, ‘Wow, I feel really good about what we accomplished.’”

“For me it was about leadership change at the organization,” he continued. “I had opportunity to look backward and see what I had accomplished, and to look forward and see that things were changing where I was. It created the ‘opportunity’ to be done and to walk away at a good time in the organization’s history.”

The long-time Central New York resident grew up in Ossining, in Westchester County, just north of New York City. He developed an interest in emergency medicine at age 14, volunteering for a local rescue squad. He participated in a school explorer program focused on ambulance work, and supported himself during his undergraduate years at the University of Rochester by driving for local ambulance companies. That experience motivated him to become a doctor, but even after being exposed to so many different specialties and opportunities, he came full circle and chose emergency medicine.

“With the other disciplines, I didn’t like the chronic contact with patients,” McCabe said. “Nobody comes to the emergency room to see me, John McCabe. They come because it’s open. I liked that ER doctors don’t need their egos stroked all the time. And I always feel invigorated. You never get burned out because it’s different every day.”

McCabe said he loved working in Upstate’s emergency department, and just sort of “fell into” the department chairman position when it became available. Even though the doctor’s passion for medicine was in the capacity as a front-line provider, he immediately found enjoyment in administrative work. The most rewarding aspect of running a department, he said, was bringing groups of people together for the greater good. McCabe discovered that he had a knack for leadership and set his sights on moving up the ladder.

McCabe enjoyed his role as a recruiter and planner of capital projects. The downside of being a hospital executive, he says, was the stress associated with the business side of medicine, and dealing with interpersonal conflicts.

“The industry is really getting quite complicated,” he said.

When asked why medical insurance costs seem to be rising at such a rapid rate, McCabe said one key reason is that customer’s demands are increasingly high. Patients expect that they and their children should be seen sooner, that their ailments are taken care of more efficiently to the point where they can return to work or school as soon as possible. “Everyone wants everything for their family,” the physician said.

Technology is another key reason that costs rise so rapidly. MRI machines, for example, are very expensive, and the demands for MRI scans have continued to increase.

Another change McCabe has witnessed during his career was the increasing number of partnerships between small and large hospitals. This has benefitted the quality of health care that is available to people in every corner of the state, but at the same time small community hospitals lose their identity.

Though heralded for his career climb that moved him from the front line of a hospital to the largest corner office, McCabe said nationally, it’s not unusual for physicians who have worked in the field for a number of years to eventually lead hospitals and health care organizations.

“It’s not common around here, but Syracuse is bucking the trend,” he said. “A doctor can be successful at it if they surround themselves with good people. I think in the past 15 years or so, hospitals have realized that there is a true value of putting a physician in charge.”

One of the things that most people probably don’t realize about the Golisano Children’s Hospital and the Upstate Cancer Center is that both were built with Upstate University’s Hospital’s own money, much of which came through capital campaign fund-raisers, and not tax dollars, McCabe explained.

McCabe has remained active with community service since his retirement, serving on board for the Hope for Bereaved organization, the Loretto board of managers and most recently Cazenovia College’s board of trustees. The Cazenovia town resident is especially excited to help with the school’s marketing efforts.

“There’s great potential,” he said. “This school is too well of a kept secret.”

McCabe and his wife, Bonnie, enjoy travelling, most recently to Italy, Morocco and Napa Valley, Calif. But they have no interest in becoming snow birds, electing instead to enjoy all of the region’s four seasons. In the warmer months McCabe enjoys boating, golfing and riding his motorcycle, and in the snowy months he skis.

“We like the geography, and we are fans of the [Syracuse University] football and basketball teams,” he said. “We like the proximity to New York City, Boston, Montreal. When I was recruiting physicians, I would draw them what I called the six-hour circle — you’ve also got Toronto, Pittsburgh, Cleveland, and D.C. For weekend trips, we are in close proximity to so many great places.”

Year round, McCabe goes to the gym three times a week, works in his wood shop and visits his grandchildren and sons Brian and David. Brian is a professor at Georgetown University in Washington, D.C., and David works for a company in Philadelphia that manages a variety of restaurants.

“I eat really well when I go to Philly,” McCabe said. “David has taught me a lot about cooking — French, Italian, seafood. I’m learning a lot about how ingredients work together.”

Back in the wood shop, McCabe found himself, at least a few months into his retirement, thinking about the hospital business and wondering about the challenges ahead in the health care industry. As time passed, the retired physician has been able to cast such distractions and focus on the tasks in front of him, like carving wooden bowls or furniture.

“It was hard to let it go, and it took me a long time. I still like to meet up with friends who still work there, maybe to go out for a beer. But I always tell them — ‘Look, I don’t want to meet up with you so you can complain about work,’” McCabe chuckled. “Retirement is about not spending all the time that you have left looking back.”