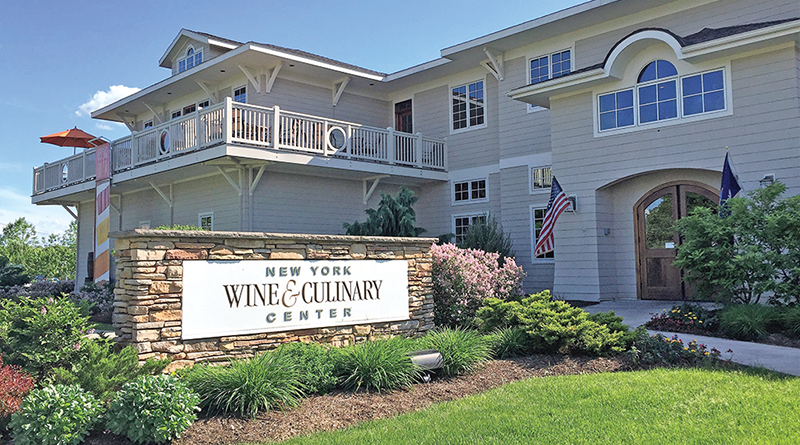 Canandaigua restaurant features  some of the best scallops around

I ate one of the best scallops of my life at the New York Wine and Culinary Center in Canandaigua.

The jumbo sea scallop — deep brown, nutty and sweet — was harvested in Montauk off the tip of Long Island. The scallop, along with the shaved radish and green baby grape clusters served alongside, were sourced in New York, as are more than 90 percent of the menu items.

Dinner on a recent early evening started with the scallop ($14 a la carte, or part of tasting menu) and a charcuterie platter ($15). Canandaigua-based Artisan Meats — formerly known as Hartmann’s Old World Sausage — supplied the meat. The capicola had a strong fennel kick, while the pork rillette had the flavor of rich pork and the texture of fatty butter. A most ideal combination, if ever there was one.

The platter included a generous helping of thinly-sliced speck, prosciutto’s slightly smoky cousin, each bite seemingly evanescing on my tongue, leaving behind a wisp of sweetness and tang. The dried landjager had a firm texture that contrasted well with the other meat.

The meats were served with “seasonal accompaniments,” which in this case was Finger Lakes kimchee that provided a welcome acidic bite to cut through the richness. The fiddlehead ferns — in season only in the spring — were lightly pickled, but still retained their firm texture. The dried grapes were large, plump, juicy and far better than anything you’d find in the classic red box.

Next came the grilled ramp salad ($8 a la carte, or part of tasting menu) with shaved daikon radish, cucumber, snow peas and a pickled ramp vinaigrette. On this particular day, five other dishes also featured ramps, a kind of wild onion that, like fiddleheads, have gained something of a cult status due in part to their short season and limited availability.

The ramps were grilled, which added pleasant sweetness to the dish and helped round out some of the ramp’s sharper onion and garlic flavors. The rest of the vegetables were sliced paper thin and the greens were light and crisp, making for a flavorful, light salad.

Just as the last bite of softened white ramp bulb disappeared into my mouth, our entrees arrived. The salmon filet special ($20), served with an herb butter sauce and asparagus, managed to provide a crisp, salty crust without overcooking the interior.

Both the salmon and rib steak ($34 a la carte, or part of tasting menu), were served with asparagus, evidence that only the freshest, in-season produce makes it onto the diner’s plate. In both cases, the asparagus still retained a bit of firmness and did not wilt or shrivel up after cooking, as meager stalks that traveled thousands of miles are wont to do.

The steak, sourced from Bedient Farms in Yates County, was seared to a rosy medium-rare and served with a raspberry rhubarb glace. The sauce was quite a bit savorier than I expected, but in this case, that’s not a bad thing. I wish the steak came with an entire basket of potato and blue cheese croquettes instead of just one.

After dinner, we sipped the last of our Gruner Veltliner and watched from our outdoor patio seats as the boats lazily drifted along Canandaigua Lake. The red of the setting sun reflecting off the gentle waves was a reminder that, like the hot dog roasted over the fire on a family camping trip or the otherwise mundane sushi you ate on a great first date, sometimes it’s the setting that makes the meal.

Of course, having the best ingredients in the state at your fingertips tends to help.