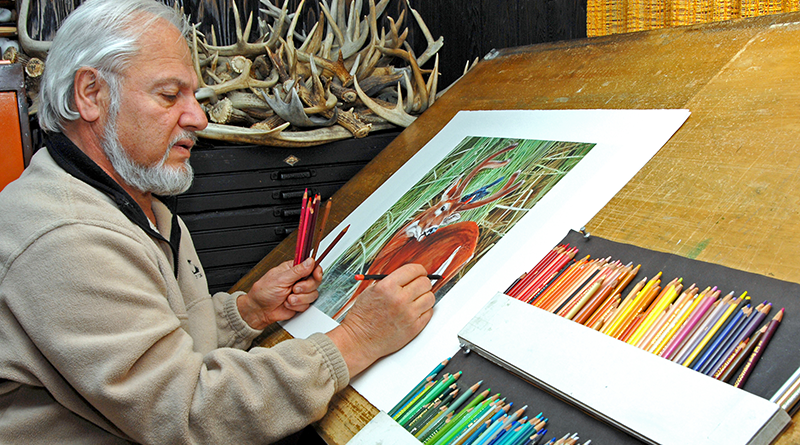 It’s not every day two former presidents of the United States come together to recognize an artist for his extraordinary work.

The well-deserved artist was Tom Yacovella of Utica, who was the guest of honor at a reception at the Wonders of Wildlife National Museum and Aquarium in Springfield, Mo., last fall.

The day before WOW opened to the public, Yacovella toured the 350,000-square-foot, $290 million museum, along with such dignitaries as former presidents Jimmy Carter and George W. Bush, U.S. Secretary of the Interior Ryan Zinke, and Hollywood stars Kevin Costner and Mark Wahlberg.

“It was the biggest thrill of my life,” Yacovella said.

Bush himself is an amateur artist and an outdoorsman who grew up in Texas. Carter, of course, is the quintessential country boy and peanut farmer from Georgia.

Costner, meanwhile, is more than an Academy Award-winning actor for “Dances with Wolves.” He’s a director, producer and social activist. Incidentally, in 2017, Costner narrated a short documentary directed by Ric Burns, “People of the Standing Stone: The Oneida Nation, The War of Independence, and The Making of America.”

Created by Yacovella in 2003, “Tribute to the Whitetail” is a one-of-a kind, life-sized sculpture of a buck created from over 300 naturally shed unaltered antlers, each carefully selected and positioned to form a specific part of the deer’s anatomy.

Yacovella collected the antlers during his 50 years of observing, photographing and painting wild animals in the Adirondacks. The finished sculpture, which took him two years to create, “embodies my passion for the whitetail,” he said.

Johnny Morris, founder of Bass Pro Shops and a major supporter of WOW, reportedly purchased Yacovella’s massive sculpture for $75,000. The piece is on permanent display at the museum.

Yacovella, 79, began honing his skills as an artist during his childhood at the Masonic Home, a former orphanage in Utica. When he was 11, his mother died of spinal meningitis and his father believed an institution was the best place for his four children.

In the midst of his homesickness, Yacovella recalled that he sought solace in the woods near the Masonic Home in east Utica.

As he related in his book, “The Wildlife Art Ventures of Tom Yacovella,” he remembers sketching landscapes and animals on his own starting at age 5, even though art supplies were practically unaffordable during the Depression. After graduating from Proctor High School, fate smiled on him. He earned a full scholarship to study art at Syracuse University and combined it with courses in advertising design.

He then served as a medic with the U.S. Army. After his discharge, armed with $55 in his pocket, he set out for New York City to pursue an art career. A friend encouraged him to show his portfolio to David Rockefeller, president and CEO of Chase Manhattan Bank. Yacovella might have been naive, but he took the risk.

Amazingly, after a nearly daylong wait, Rockefeller consented to see the ambitious young stranger. Impressed with Yacovella’s drawings, the prominent businessman put Yacovella in touch with one of the corporate giant’s advertising agencies.

Yacovella spent the next eight years toiling in the Big Apple, but he said he missed the interactions with “the living, breathing nature of the Adirondack Mountains.”

Every Friday after work, “I would travel through the night, arriving at Tupper Lake around 5 am., ready to explore,” he wrote in his book. “I listened to howling coyotes and picked wild mushrooms to complement meals of freshly caught brook trout.”

His world was not all advertising related. He became engrossed in the musical scene in Greenwich Village. He met his future wife, Joanne (Thomas), a singer, during a show in Brooklyn. The pair went on to perform professionally as “The Plainfolk” for 15 years, with Yacovella playing guitar and contributing vocals.

Nevertheless, Yacovella felt he had to follow his heart out of the urban jungle.

In 1967, he found a job as a logo designer with an advertising firm in Vestal. His talent landed him such clients as Corning Glass, General Electric, IBM, Utica National Insurance Group and Endicott-Johnson. He began exploring the Catskills and dreamed of devoting himself to a career as a wildlife artist.

In 1973, he started his own advertising and communications agency in Utica. He also designed a commemorative gun for Remington Arms in Ilion.

His background as an avid fisherman, hiker and longtime hunter who would “shoot” his subjects with colored pencils, pastels and paintbrushes instead of lethal weapons made his artwork personal and authentic.

He was one of the founders of Wild Turkey Unlimited. He also took part in annual fishing derbies designed to educate youngsters. As a result of his willingness to help others, he was inducted into the Outdoorsman Hall of Fame in 1985.

In June 2009, Yacovella caught a 5-pound, 4-½ ounce brook trout at Racquette Lake in the Adirondacks. With a length of 21 inches and girth of 15 inches, the fish turned out to be a state record.

Finally at the turn of the 21st century, he chucked the corporate world for good. “I determined that all future efforts would be directed toward my own personal walk,” he said in his book.

More success followed. An 18-by-24-inch acrylic, “Keep Looking For A Bluebird,” was widely acclaimed. The unique painting of a circling flock of bluebirds earned four major national and international awards in 2006, including a gold medal in the 25th Adirondacks National Exhibition of American Watercolors in Old Forge.

The cheerful bluebird seemed to become Yacovella’s personal icon, much like the eagle came to represent Uncle Sam.

Yacovella certainly soared to new heights with “Tribute to the Whitetail,” much of it because he invested a lot of time promoting and showing his artwork. It won the 2003 International Art Competition in “The Artist” magazine and the People’s Choice award in the wildlife art exhibit at the New York State Fair, also in 2003. It earned first place in sculpture in the master’s division at the 53rd annual Adirondack Art Show in Old Forge in 2005.

Morris’s acquaintance with the artist’s work came about by happenstance. About five years ago, Morris was touring the Northeast and decided to tour the Adirondack Park. He stopped at The Wild Center in Saranac Lake before visiting Lake Placid.

He discovered “Tribute to the Whitetail” on display in the lobby at The Lodge, a new hotel in Lake Placid, and envisioned it as an ideal centerpiece for the wildlife museum.

The trip to Missouri for the reception in September was a major undertaking for Yacovella, who was battling pulmonary fibrosis and made few public appearances. With the need for dozens of oxygen tanks, he could not take an airplane flight.

Bob Beck and Hank Eichenhofer came to the rescue with a recreational vehicle that could hold three old friends plus Yacovella’s medical equipment. “My fishing buddies assisted me,” he said. It truly became a trip of a lifetime.

(Note: Yacovella died unexpectedly at St. Luke’s Hospital in Utica on Jan. 18, two weeks after my phone interview with him. He is survived by Joanne, his wife of 54 years; a son, a daughter, two grandchildren, two sisters and a brother.

A Master Mason for 55 years and president of the Masonic Home Kids Alumni Association for 20 years, Tom leaves many “brothers” and “sisters” with whom he grew up at the Masonic Home. Relatives and friends packed a memorial service for him at Westminster Moriah Olivet Presbyterian Church on Jan. 24. Tom asked that memorial contributions in his honor go to Feed Our Vets in Utica.