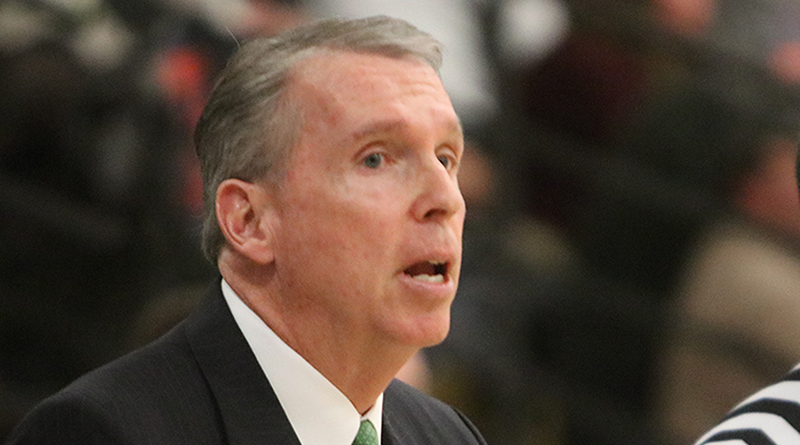 Q: What made you decide to go into coaching?

A: I graduated from SUNY Potsdam in 1980 and was working on my master’s and was looking for something else to do. Ron Margrey, the East Syracuse-Minoa High School coach, was looking for a junior varsity. I was at ESM for two years at JV and then four years at varsity, and then moved to Bishop Ludden High School when I took over at for Jerry Wilcox for the ’87-‘88 season.

Q: What made you decide to retire?

A: It was a combination of things. There was a little bit of a health scare. I had prostate cancer. Everything’s OK there. I’m doing fine, but I was kind of losing the passion for the off-season work — the summer leagues, the fall leagues and strength and conditioning. My wife, Laurie, was one of the biggest factors by behind me and working with me every step of the way.

It was time for us to do something else. And I think the deciding factor was having Gallagher Driscoll in the building and having, what I consider, the perfect hand-off for the program. [Driscoll, Ludden’s athletic director and a one-time player for Donnelly at Ludden, will assume the head coach duties next season].

Q: What is your overall record and record for titles and championships?

A: I’m going on what was in the paper. I think I’m at 571 wins. We have two state championships, 12 sectional championships, and I think we have 17 or 18 league championships. We’ve got four New York state regional titles.

Q: What was it like to coach at the same high school where you played during the 1970s?

A: I think for anybody that is fortunate enough to go back to one of the schools they attended — whether it was high school or college — it’s a thrill of a lifetime. It’s also very intimidating. You remember when we were walking around there as students.

Q: You were a coach for 31 years at Ludden.  What are some of your favorite memories?

A: Basketball-wise, there are a million of them — the two state championships and the trips to the state’s Final Four.

I find myself thinking more about where our players are and what they’ve done and less about the wins and losses. It’s an exciting thing to see how successful they’ve become, and you hope that basketball somehow played a small part in it.  But I’m just really proud of where these guys have turned out to be.

Q: As a coach for 30 years, you’ve seen a lot of players go through your program. If there is one lesson you hoped to have left them with, what would that be?

A: I think the respect and caring about each other and being part of a team. I always talked about looking to the left, looking to the right. Maybe someday you’re going to need somebody in this room. I think they bought into that — of being good teammates and working well with others.  Hopefully, that led to some success in their family lives, and also their professional lives, in not always making it about “me” and making it about “us.”

That’s one of the biggest lessons — we want to make it a team effort.

A: I retired from National Grid in 2013 and then there’s four or five of us that have started a digital marketing company called Textster.

My wife and I are going to do some traveling.  Maybe sometime I will be an assistant coach someplace to keep my hand in basketball. That’s never out of the equation.