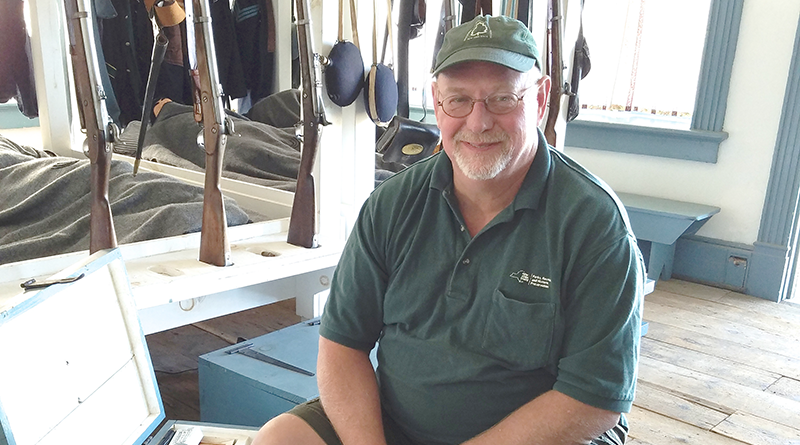 Manager of historic site embodies significance of past

Paul Lear, site manager of Fort Ontario in Oswego, often wishes someone would invent a time machine so he could travel back and forth between 1755 and the present.

Frequently, he finds himself in that predicament, especially here where the time span is more than 250 years. But that’s not possible and he makes the best of it.

He proudly points out that Fort Ontario, in one way or another, has had representation in all wars and conflicts dating back to the French and Indian War.

Lear, 58, has had a full-time job tracking and recording the fort’s history back to the time when the British first built it in 1755. Then, the fort was no more than an eight-pointed wooden stockade.

“I think Fort Ontario is one of the greatest historic military sites in the nation,” Lear said. “It needs to be recognized.”

That it will if the efforts of him and others result in it becoming a national historic site of the National Park Service.

He said he’s encouraged by U.S. Congressman John Katko’s (R-Camillus) efforts to make Fort Ontario a national monument. But that’s all. And as they say, “it’s still in the works.” It could take several years before this occurs, Lear said.

Meanwhile, it’s business as usual for Lear. He continues, as he has for more than 20 years, the daily routine of operating the site and directing a corps of dedicated volunteers. He’s been creating new and revamping older exhibits that represent military life through the ages. He speaks to groups and does everything seemingly possible to create and maintain an awareness of the historical significance to Fort Ontario.

Over the past several years, the New York State Office of Parks, Recreation and Historic Preservation has made numerous and long-needed infrastructure improvements at the fort. The site has been a state property since 1949.

Since high school, Lear has always been interested in military history. The fort annually hosts numerous events, especially featuring groups of re-enactors who reflect military life over the past 250 years. These include the French and Indian War, the Revolutionary War, War of 1812, Civil War and succeeding conflicts.

Lear is working on some new programs in conjunction with the U.S. World War I Centennial Commission. One of the programs will be the 10th Annual Fort Ontario History & Archeology Conference April 21-23, which will focus on the French and Indian War (1754-1763) and World War II. Hundreds are expected to attend, he said.

Lear said he is especially proud of a new orientation exhibit that opened last May that interprets the entire gamut of Fort Ontario’s contribution to American history. Lear said the fort also served as a recruiting center during the Civil War and many men recruited locally courageously served in its major battles, including Gettysburg.

During the War of 1812 bicentennial, Lear helped organize a series of annual symposiums held in Oswego that brought in noted expert historians who spoke on various topics, both from the U.S. and Canada, to give it perspective.

Lear has been at the helm of Fort Ontario since 1999. A native of the Albany area, he previously held interpretive positions at New Windsor Cantonment and Washington’s Headquarters in Newburgh.

Lear served as programs assistant prior to becoming site manager.

He earned his Master of Science degree in public archaeology from Rensselaer Polytechnic Institute in 1985 and a Bachelor of Arts degree in anthropology in history at SUNY-Albany.

Believing in community involvement, Lear has served on the board of the Greater Oswego-Fulton Chamber of Commerce and the advisory board of the Oswego County Tourism Advisory Committee.

He also has been involved with the Oswego County Historical Society and the board of Safe Haven, a museum adjacent to Fort Ontario.

He said he enjoys working with young volunteers who show an interest. “Their enthusiasm is encouraging and it demonstrates young people are interested in the past,” he said.

He said they learn surprisingly quickly such things as military codes, drill practice and how to properly wear a military uniform of the post-Civil War period.

“They want to do it right,” Lear said, adding, “they are returning to their roots.”

Lear said he is also thankful for the Friends of Fort Ontario “who give us great support” doing such tasks as manning the gift shop and fundraising.

The fort has a library. Though not formally open to the public, it may be used by researchers. It contains many old and new books, journals, manuscripts and other historical materials.

An encyclopedia of information himself, Lear is always ready and willing to answer questions. He has written numerous articles himself and is frequently consulted to share his knowledge.