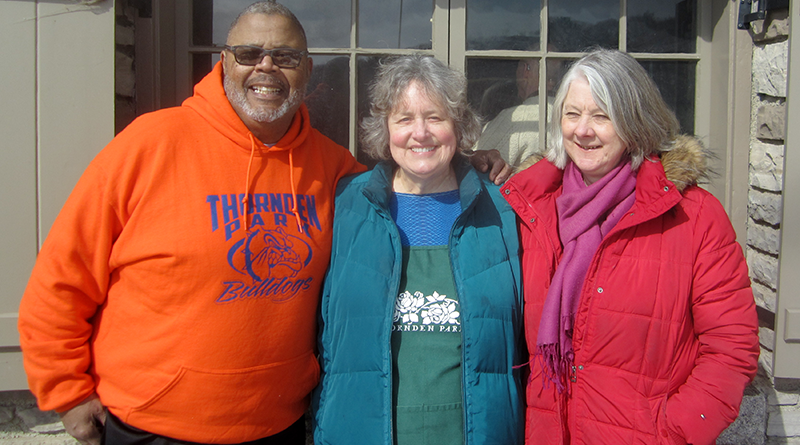 Some members of the Thornden Park Association in Syracuse were decades younger when they first got involved in restoring their neighborhood’s 76 -acre park.

Their efforts have reaped rewards for the whole community and, as restoration continues, it is likely it will continue.

“I think it’s the results you see over time that are just really rewarding,” said Miranda Hine, 67. “I feel really proud of what we’ve accomplished. The other piece is working with really amazing people and getting to know your neighbors really well, and forming a community within the community. It’s been really satisfying to me personally that there are things here in the park that weren’t here when we first moved here 35 years ago.”

Hine, originally from England, married her American husband when she was 19. They settled in the university neighborhood and raised a family not far from the park. Her kids learned to swim at the pool in Thornden and now her grandkids are following in their parents’ footsteps.

“Well, I think our goal is to restore all the 76 acres of this park,” said Carol Simson, 71. “We have short-term goals, long-term goals and medium goals.”

Like Hine, Simson is another resident of the neighborhood that believes in giving back. Earl “Gator” Darisaw, 61, is yet another. He helps run the Pop Warner football effort at the park.

The Bulldogs fielded 122 kids on four different teams last year. They didn’t get into the playoffs last year, but Darisaw is more optimistic about this fall.

In terms of the amphitheater, “we’re trying to get together $200,000 that’s been designated for it by NYS Assemblyman Sam Roberts,” Hine said. “We’re hoping to write a grant to match it. That’s in the early stages. We haven’t started. We want to make it handicapped-accessible. There’s a major drainage problem. Then the changing rooms underneath need to be restored. They’re in pretty bad shape. We just want to get it so it would attract other users, again, to bring people into the park.”

The park has a number of features that help make it special. There is the huge weeping beech; the restored carriage house; the E.M. Mills Rose Garden, which the association believes is one of the oldest and finest municipal rose gardens in America; the reservoir; the herb garden; the azalea walk; the children’s spray pool; children’s playground; and the exercise course which is under renovation.

The trio of association members spoke outside the stone field house during the chili festival, a fundraiser that takes place in March. It was a frigid Syracuse day, but that didn’t stop at least 100 people from partaking in the neighborhood tradition, which included chili, drinks and music.

While Hine and Simson sat outside on a picnic bench, they related some of their fondest memories of the Thornden.

The lily pond is another park feature that was once long forgotten until it was restored.

“My memory is of a neighbor,” Hine said. “She’s since died, but in the early stages we were planting things in the lily pond. We were at the very beginning. Debbie Wellman and I were with other people planting the flowerbeds.  The rose garden’s always been a wedding place. She asked, ‘Do you think people will ever get married here?’ I said, ‘I don’t know.’ Now more weddings take place at the lily pond then even at the rose garden.”

It is the hard work of Hine, Simson, Darisaw and other unsung heroes that have brought the whole park back to life.

Thornden Park was formally created in 1921, but back in the 1960s and ‘70s, it fell into disrepair and perhaps even disrepute. Now, in part because of the efforts of the association, founded in 1983, it draws people in from both within and outside the university neighborhood.

It is a gem of the many area parks, and with help of the association, may likely continue to offer decades of rest and recreation to area residents.

Back in the old days before the association, when Simson was a Syracuse University student, she first encountered Thornden Park. It was an encounter that would lead to her part in the park’s rejuvenation.

“I saw all the gardens here,” she said. “There were all flowers all over. It was so beautiful. It was many years ago. It really did make an impression.”