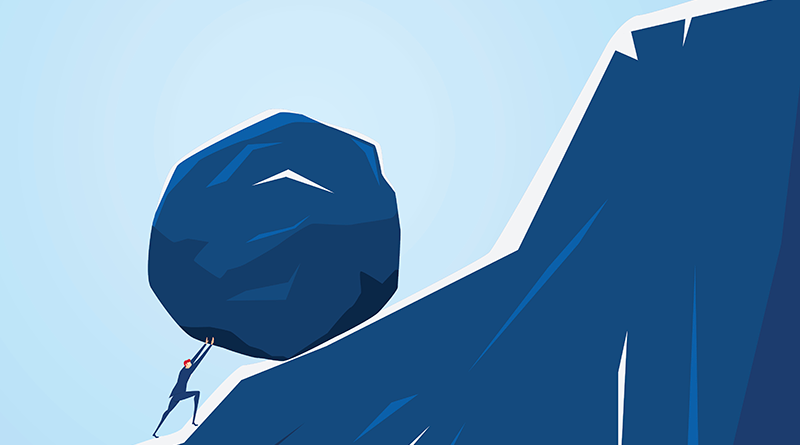 Study: A retirement income crisis is looming for people near retirement and already retired. Most carry tens of thousands in debt

Most Americans who are retired or approaching retirement age won’t have nearly enough money to sustain the standard of living they enjoyed while working, a recent national study reports.

In fact, that’s putting it mildly.

The study by the Employee Benefits Research Institute, released in March, calls the situation a retirement income crisis, noting that 77 percent of households headed by persons 55 and over carried some type of debt. In 2016 (the most recent data that was available), among those with debt, families with heads aged 55–64 had a median debt of $68,300, compared with $20,900 for families with heads aged 75 or older.

Housing debt for the 55 and over American population has nearly doubled in the past quarter century, from 24 percent in 1992 to 40 percent in 2016, though the percentage change fluctuated during that time period as opposed to a continual increase. As for credit card debt, the percentage of such households was in the low 30 percent range through 2004, fluctuating in the next 12 years and tallying 38 percent in 2016.

The report did note that increasing debt is as much of a problem, if not a bigger problem, with younger families. Households headed by individuals younger than age 55 with debt ranged from 81.2 percent in 2013, to 84.4 percent in 2016.

Local experts aren’t surprised with the study’s findings. They were well aware of the looming retirement income crisis years ago.

Eric Kingson, a professor of social work and public administration at Syracuse University and a founding member of the Washington, D.C.-based Social Security Works agency, attributes this situation to a few key factors: Wages in the past 40 years have decreased in comparison to inflation and skyrocketing health care costs. Labor unions have declined, and most private sector companies have stopped providing pensions. Federal entitlements like Social Security and Medicare fall way short in helping retirees make ends meet and avoid taking on mountains of debt. And people are simply living longer.

“Sometimes I feel like my generation may be the last generation to have it fairly decently. The crisis is in full swing.” – Bill Spreter, president of the local chapter of the New York State Alliance of Retired Americans.

“I’d say this is disturbing, even alarming,” Kingson said in a recent interview. “We have not been living in a time where middle class incomes are growing.”

Now, more so than ever before, America has a “sandwich” generation of citizens who are still financially supporting their grown children, via paying for college and other major expenses, while also physically and financially caring for their own parents.

The middle class sustains the most visible damage in this trend, Kingson said, but he cautioned that folks who are considered upper middle class and even wealthy to a degree feel the pinch as well, mainly due to out of control costs for long-term care.

“I don’t see where increased retirement savings come from,” he said. “It’s not a matter of just telling people to buckle down and save more. But you can’t forget the low-income households either. People who have always worked long and hard for low wages must continue that into old age. It’s just not right.”

He fears that continued tax cuts, which he calls a disaster, will only widen the retirement income gap. He also believes that Social Security and Medicare remain vulnerable and easy targets under the nation’s current leadership.

Kingson noted that about 155,000 people in the 24th Congressional District (Central New York) receive Social Security. A small tax hike of about 50 cents per week from every wage earner for the next 20 years could shore up the program and allow life-long taxpayers to live out their remaining years a bit more comfortably.

“This could remove a lot of pain,” he said. “There are bumps, but the shortfalls we’ve projected can be addressed.”

In lieu of strengthening the Social Security and Medicare programs, Kingson offers some advice to those approaching retirement: If you are healthy enough and can find work that is tolerable, postpone retirement past 65. Likewise, avoid collecting Social Security in order to maximize the benefits in a time when you may need them more.

Bill Spreter, a retired teacher from the Hannibal Central School District in Oswego County, is president of the local chapter of the New York State Alliance of Retired Americans. While he is thankful for having a pension that helps support him financially, he has friends who are scraping money together to cover medical and dental emergencies even though they worked for decades, always paid their bills on time and attempted to save money after their children were out of the house. One of his friends just learned that her diabetes medication will cost $6,700.

In the 1980s, he explained, 60 percent of employers had pension plans, and workers had the ability to calculate their retirement savings and make a plan for living debt-free. It is “unconscionable,” Spreter says, that companies abandoned pensions long ago and are getting huge tax breaks. Meanwhile, 401K plans have been very unpredictable and simply haven’t done enough to prepare wage-earners for retirement.

Like Kingson, Spreter is a big proponent of increasing wages and strengthening unions. But he cautions that returning organized labor to what it once was is a daunting tasks when existing unions continue to lose power and influence.

“The present administration in Washington is counterproductive in many ways to the economic stability of future retirees, Generation X and the millennials,” Spreter said. “Look for more corporate-inspired lawsuits to diminish the power of unions that will economically jeopardize young people approaching retirement.”

Kingson and Spreter both acknowledged that societal values have changed over time. Those who were alive during the Great Depression and World War II learned real life lessons about the benefits of thriftiness, and may have been more disciplined about saving money. But American culture and economics have changed so much since then. A college education, for example, is no longer viewed as a rite of passage for only the wealthy.

If the retirement income crisis is not addressed, Spreter says, millions more Americans will fall into the low-income brackets, and the population of those who are stuck in the generational poverty cycle will continued to grow.

Housing debt for the 55 and over American population has nearly doubled in the past quarter century, from 24 percent in 1992 to 40 percent in 2016.

“Sometimes I feel like my generation may be the last generation to have it fairly decently,” said Spreter, 69. “The crisis is in full swing.”

Still, that’s not to say that everyone who is still working past the age of 65 does so because they have no choice. Many older adults maintain part-time or even full-time jobs on their own terms to stay busy, remain sharp physically or mentally, to remain in touch with people they enjoy, or to make a little extra money for vacations.

Linda Cook, for example, returned to a job at Loretto Health and Rehabilitation in Syracuse 14 months after retiring in May 2011 at the age of 65. She spent her career as a public health nurse, but had the chance to come out of retirement to help with marketing efforts with Loretto’s Pace program.

“I wasn’t bored in retirement,” she recalled, “but I missed the social part of working. I do feel like I’m making a difference, and the extra money is great for travel and vacations. I have no mindset about quitting at all. I’ll go for as long as I want.”

Fred Deuel, 69, went to work in the maintenance department of Loretto three months after being fully retired. He still collects a pension from his previous career and Social Security. In his second career, he no longer had to work weekends, which he spends at a camp at the Thousand Island.

“I hesitated [to come out of retirement], because I didn’t like getting up at 5:30 a.m.,” he said. “Working has been good for me mentally and physically.  In retirement, you can lose that motivation and mobility to stay active. I’ve seen too many people who retire and dwindle away.”