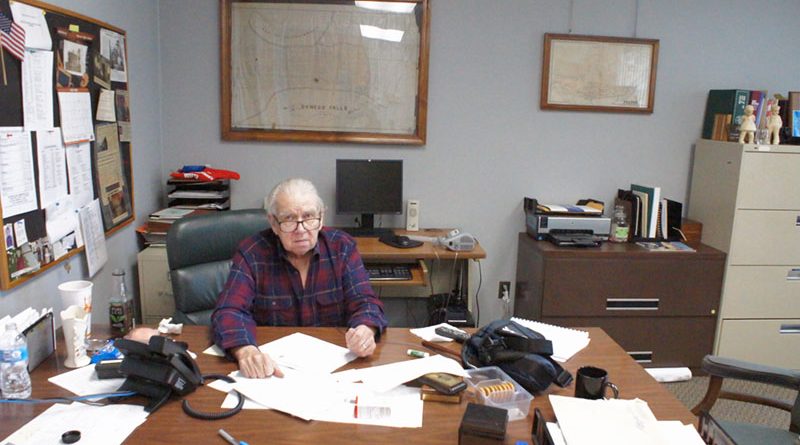 Long-time Fulton mayor will retire at the end of the year, after more than three decades of public service

Q: What prompted you to retire at this time?

A: My health is not getting any better. I’ve had health issues for years. I’m a two-time cancer patient, I’ve had my heart operated on. When I leave at the end of this year, I’ll have 34 years of city service in. That’s a long time. I started in 1982. I was mayor is in 1986 and 1987. I was a councilman, then I was executive assistant to the last mayor, then mayor again. I’ve enjoyed it, but I think it’s time for someone new to take over, someone young, newer, with fresher ideas. I don’t care what your politics are. That doesn’t matter to me.  All I care about is that they’re good for Fulton.

Q: What are you most looking forward to in your retirement?

A: I have quite a few grandchildren and a few great-grandchildren. I enjoy antiques. I shop for them. I sell a little bit. I’ll probably do more of that. In the good weather, I like gardening. I do a lot of vegetable gardening. I make my own chili sauce. I can tomatoes.

Q: You worked at Nestle, you’ve been in government for a while. After all these years of working, what’s going to be the biggest challenge in retiring?

A: Boredom. I believe a healthy body is not healthy unless you have a healthy mind. A healthy mind comes from being active. I’ve had my share of health issues over the years, two-time cancer patient, heart issues, blood pressure issues, but through it all, I was always busy. I kept my mind busy. I love the city of Fulton. I grew up here.  I remember what it used to be like when we had all the old businesses.  I’m smart enough to know it’s never going to come back.

Q: What would you like to see for Fulton in the next few years?

A: I would like to see some jobs come here. Jobs are important for people. If you want young people to stay here, they have to make a living. Also, I want to see Lake Neatahwanta be cleaned up. I’ve been working on that. Finally, we got North Bay Campground into the city.  That was in the town of Granby. [By annexing the campground into the city limits, it allows for easier funding and implementation of improvements.]

Lake Neatahwanta, I’m told, means “little lake by the big lake.” It’s a beautiful lake. A lot of good fishing in it. Sediment from some of the surrounding farmlands and the towns made an issue of it with the springs. We own our own dredge now. We should be able to go in there and get that done. I’m confident that the next mayor  will care as much about the lake as I do because Fulton people want it clean. They have fond memories of it. My administrative assistant has a newspaper clipping from back in the ‘20s.  They called Lake Neatahwanta the “Coney Island of Upstate New York.” That’s an asset to Fulton. We should be proud of it. We should take care of it.

Q: In your 12 years as mayor, if you had to name one or two of your greatest accomplishments, what would they be?

A: I think the annexation of North Bay into the city and the annexation of the waste treatment plant into the city is one of them. The reason for that is the waste treatment plant is crucial to any business or industry. When it was located outside the city, we were paying $140,000 a year in taxes. I don’t want to take credit for everything because at the end of the day, it’s the people that work for you that do the good stuff. But I worked with Danny O’Brien [city clerk/chamberlain] to introduce LED lights. That’s been one of my interests since I became mayor.  That’s a huge thing going forward. Street lights, City Hall and all city buildings. Saved a ton of money. That Nestle project was huge — that’s a 24-acre teardown. The Oswego County Industrial Development Agency is going to build a small interpretive center on the Seventh Street side [to keep Nestle’s history in the city alive]. We’re getting a lot of interest in that.

A: I just want to say that doing the job for the city for all these years. I appreciate the people that always supported me, and the public. But I am looking forward to retirement. And I wish whoever comes here all the luck in the world. Not that they would need my help, but if there’s any way I can help them, I will.