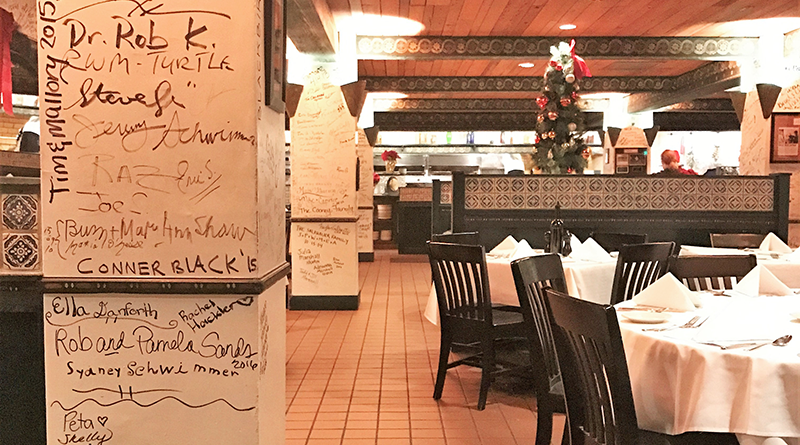 At Rosalie’s Cucina, the names of celebrities and politicians — Bill and Hillary Clinton, Joe Biden and Jim Boeheim, to name a few — grace the white walls, a reminder of the Skaneateles restaurant’s widespread acclaim.

Phil Romano, an Auburn native whose Romano’s Macaroni Grill and Fuddruckers restaurant chains blossomed into international successes, built the restaurant for his sister, Rosalie, in 1995.

Tragically, Rosalie died in 1996, but the Romano family recipes, demarcated on the menu with asterisks, live on.

My dining companion and I both opted for family recipes, but first came appetizers. Beef carpaccio is a favorite of mine and Rosalie’s version ($11.50) is right up there with the best. Thin slices of raw beef are laid out and topped with red onion, tomato, capers, parmigiano-reggiano cheese, caper aioli, fresh greens and two well-seasoned crostini.

The acidic kick of the whole capers and caper aioli played well with the savory beef, but it was the generous rub of black pepper on the beef that heightened all the flavors.

In addition to the full dinner menu, the restaurant offers a three-course prix fixe “Tuscan” menu ($28) on Tuesday, Wednesday and Thursday nights from November to April.

Dinner from the Tuscan menu started with a Caesar salad, which despite the smaller portions of the Tuscan menu offerings versus their a la carte counterparts, was sizeable. The chopped romaine was crisp and the dressing was tasty, even though it lacked a bit of the anchovy funk I enjoy, but the garlic croutons — crunchy, but not brittle with just the right amount of chew — were perhaps the finest croutons I’ve eaten.

Cappa Santa al Prosciutto e Basilico ($33.95), a dish of seared sea scallops with tomatoes, prosciutto, spinach and angel hair pasta, finished with a lemon butter sauce, is among the family recipes on the menu.

Despite there being no more than two dozen diners in the restaurant this Thursday night, I spotted the scallops come out of the kitchen several times, including the couple at the next table, who both ordered the same dish.

And as it turned out, for good reason. Think of it as a dressed-up, Italian version of the classic bacon-wrapped scallop, with the bonus of a velvety butter sauce with enough lemon to keep the whole dish light. All five scallops were plump, properly browned and tender and the angel hair pasta, which all too often ends up as a congealed, sticky mess, held up well to the tomatoes and spinach served on top.

Beef braciole, a dish of thinly-sliced sirloin stuffed with garlic bread crumbs (made from the same bread as the delicious croutons, perhaps?) and basil, topped with puttanesca tomato sauce and served with broccolini and parmigiano-reggiano gnocchi, is available both a la carte and as part of the prix fixe menu.

The beef isn’t lost under the puttanesca sauce, which with its olives and capers, can certainly stand on its own. Broccolini — broccoli’s sleeker, trimmer cousin — had a hint of smoke, as if it were grilled. A scattering of gnocchi were melt-in-your-mouth tender.

Yes, there are several celebrity signatures on the wall, but most the signatures are those of locals who’ve been eating there for two decades. Rosalie’s is the kind of restaurant that’s good enough to serve top-notch beef braciole, but comfortable and authentic enough to call it “beef brazool,” like a proper Italian grandmother. In fact, if executive chef Marc Albino put on a gray wig and disguise, I reckon it’d be hard to tell the difference.