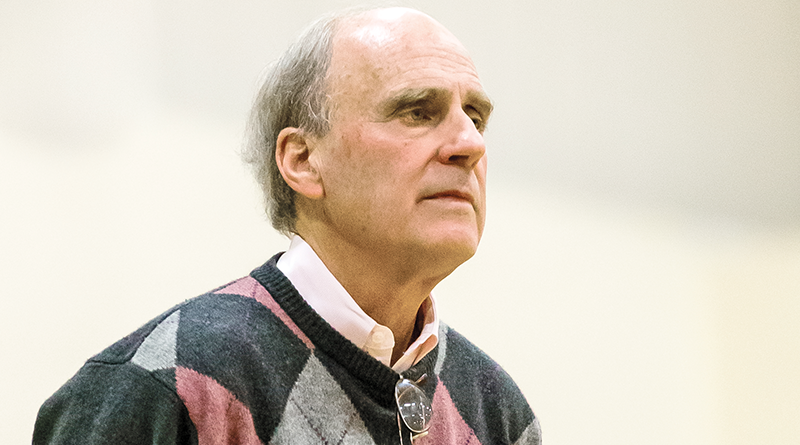 Michael Bowser’s friends and colleagues describe him as one of the smartest, most focused and hardest-working men they have ever known. But if you really want to understand the way Bowser thinks, they say, watch a basketball game with him.

Instead of cheering for either team, Bowser watches the entire court intently, grimacing as if trying to make mental notes above the noise of the crowd. When the game is over, he’s unlikely to talk about a star performance by a single player, a buzzer-beating shot or how the losing team fell apart. He’s more interested in the unusual variation of a pick and roll that was run once or twice, or the unorthodox spacing of a successful double team play that shouldn’t have worked.

He’s really that freakishly geeky about the game.

“He’s a workaholic,” says Chris Comino, who played for Bowser at Cazenovia College before joining him as the assistant coach. “It’s always more than just watching a game for enjoyment. He also works harder than most college players do on his own jump shot, and he’s not the one playing. He’s always learning, he taught us how to be like that, and not with just basketball. He develops the whole person.”

The 72-year-old coach now retired from a rewarding career as a cardiologist, Bowser is free to continue his true passion — coaching high-level hoops — full time. The LaFayette resident took some time recently to talk about experience growing up in Central New York, his career, family, and his love of round ball.

The Buffalo native moved to DeWitt at the age of 13. His father, Aaron, worked for an electronics component company. The oldest of six siblings, Bowser attended Christian Brothers Academy. He always aspired to become a doctor, though at times some of his classmates doubted he could get into medical school. Upon graduation he enrolled at the College of the Holy Cross in Worcester, Mass., studying the classics and pre-med. By this time Bowser had played in youth basketball leagues and stuck with the game at the intramural level, but it was long before he showed any promise as a competitor or teacher.

Still, his wedding day some 47 years ago was a sign of things to come. Bowser recalls playing a game of hoops with the group of friends that were to be his groomsmen that day. The church bells were scheduled to ring at 4 p.m. In the thrill of the game, they had forgotten this until just a few minutes before they were supposed to be at the altar, and after showering and getting dressed they were all more than a half-hour late.

“She [wife Melanie, to whom he is still married] knew what she was getting into, I guess,” Bowser said with a laugh.

Bowser did well at Holy Cross and continued onto medical school at the University of Maryland. Two years later he elected to transfer to Upstate Medical University in Syracuse. He desired to become a family doctor, and upon graduation opened a general internal medicine practice in Fulton. He enjoyed his short time there immensely.

“You got to know the patients closely and people really appreciate what you did for them,” he said.

The young doctor quickly developed an affection for the heart. There were few cardiology services available in Oswego County, so Bowser had to do some pacemaker procedures for local patients and then refer them to specialists in Syracuse. He also wanted to practice something more sophisticated. Bowser pursued a cardiology fellowship at Upstate Medical University and upon completion of that program was hired to join a multi-disciplinary practice that was affiliated with Crouse Hospital and headed by doctors John Duggan and William Schiess.  Bowser played a key role in establishing Crouse as a premier facility for cardiac catheterization and invasive cardiac procedures.

As Bowser became a mid-career professional, he wanted basketball to be more than just a hobby. He had really enjoyed teaching the game to his three children — Aaron, Ryan and Lindsey. He was also playing much better, and much harder, than he did when he was in his 20s or 30s. He evolved from the scrappy guy who played harder than most at defense, to a solid playmaker and a formidable outside shooter.  But it was his experience as a fan watching Syracuse University games that inspired him to coach beyond the recreational level.

“I liked to watch it and think about what I’d do if I was the coach. Who would I sub in? What plays would I run? The more I did that, the more determined I was to be one of those guys pacing the sidelines someday.”

Bowser attended a coaching clinic headed by Indiana University’s Bobby Knight. Because of his age, profession and determination, Bowser left quite an impression on Knight and was even invited to use the Hoosier legend as a reference.

“I’ll never forget when he put me on the spot in front of the team’s medical staff,” Bowser said. “He said, ‘what the heck is wrong with you guys?’ He’s a doctor and a coach, and you guys, well, you guys are just doctors.’”

Years later, at an intensive point guard clinic in Florida, nationally-acclaimed trainer Ganon Baker told Bowser that he was the oldest person he had ever trained. That program was attended by former college players and pros in their 20s and 30s who made the move to coaching. “Doc” loved the attention and needling from his much younger peers and never got discouraged.

At the age of 55, the doctor obtained a New York state coaching certification for high school basketball and started his career as an assistant coach at Liverpool Middle School. The following year he coached the junior varsity at Fabius-Pompey high school and also served as the assistant varsity coach.

“I thought that would be it,” he said. But an unusual set of circumstances later on cleared the way for his collegiate career.

The son of a heart attack patient Bowser had treated was the head coach at Cazenovia College, and that coach just happened to be looking for an assistant. Bowser, though already busy with his medical practice and coaching in Fabius, was happy to sign on for the additional job.  A few years later, the head coach decided to return to coaching high school hoops, so Bowser was promoted. By this time Bowser was employed at St. Joseph’s Hospital Health Center, where he scaled back his schedule to office visits only and no longer performed surgeries. In 2008, he retired from medicine to concentrate on coaching full-time. At the end of that season, the 63-year-old was honored as the NEAC division coach of the year.

He loved the level of skill and dedication of college hoopsters, and he didn’t miss dealing with meddling high school parents. But there were also unique challenges, including the Division III NCAA regulation that prohibited coaches from working with the players during the off season. And in Division III, which cannot provide athletic scholarships, it’s difficult to recruit players based on who you think would fit best in your system, Bowser added.

At Cazenovia, the hallmark of Bowser’s program was fundamentals. Kids were required to learn and drill the correct techniques — things like aiming for the square on the backboard with shots as opposed to the flashier “nothing but net” approach. He reminded them of what is important — a solid first step, getting your body low to protect the ball, and other techniques that give you an extra second to better execute a drive, pass or shot.

“Nowadays,” he growled, “kids want to automatically chuck it from the three-point line.”

Bowser took a coaching position at Well College in 2012, but has remained close with many former players and the athletic staff at Cazenovia College. Wells also plays in the NEAC, so Bowser has returned to his old court annually. During Bowser’s first trip back as an opposing coach, all of the players in the Cazenovia starting lineup — his recruits — gave him a hug as they were announced onto the floor.

“The best part is staying in touch with the kids as they become adults,” he said. “I wouldn’t trade my years at Caz for anything.”

In addition to spending time with his wife, three children and five grandchildren, Bowser enjoys reading books about American history. He’s also an avid gardener, spending up to 30 hours a week during the warmer months in his yard.

The heart doctor has always been very conscious of what he puts into his body and the importance of exercise. Bowser said he developed arthritis, which he says is hereditary, and also had a hip replaced in 2001. And yet, he works harder now on his game and physical fitness than he ever has before. Bowser’s regimen includes weight training and several hours a week on a treadmill and stationary bike. He also practices his shot four times a week, with the most intensive session on Saturdays.

When Boswer began his shooting practice routine five years ago, he shot about 25 for 45 from the three-point line. But around the time of this interview, he had shot 25 for 28.

“If an old man can get better at shooting,” he says, “then I’m sure any college kid can.”

Bowser still practices and competes in pickup games at an indoor court owned by longtime friend and fellow LaFayette resident Rich Purcell. Purcell recalled the days when the cardiologist would rush to the court immediately after his weekend on-call days. Decades later, Bowser is still the guy who wants to guard the best offensive player. He says “Doc” is an outstanding role model for everyone, young or old.

“He always had basketball in his heart,” Purcell said. “There’s never been anyone who worked harder at his game or in life.”