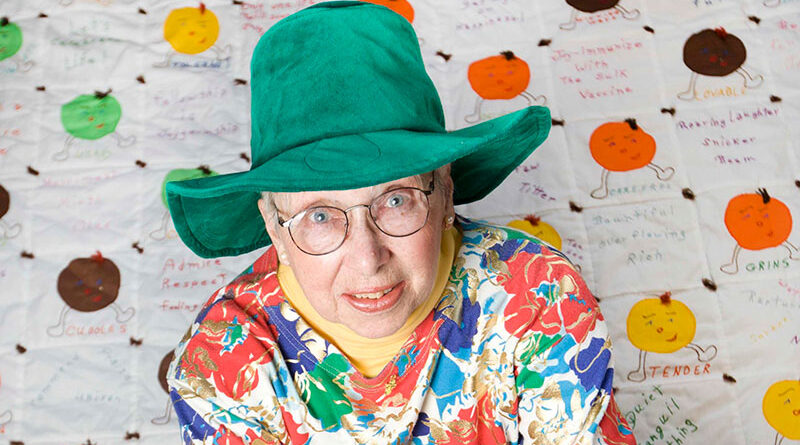 Joygerms is a one-woman operation that has taken on a life of its own, its founder says. Its goal is to accentuate the positive

A global pandemic is no laughing matter. Coronavirus cases continue to rise and people continue to stay home to help stop the spread. That means no travel (for the most part). No movies. No concerts. No spectator sports. Some would say no nothing.

Leave it to Joan E. White, also known as “Joygerm Joan,’’ to accentuate the positive and find the silver lining.

Last March, in the early days of the pandemic, White wrote a letter to the editor that appeared in The Post-Standard and online at Syracuse.com. It read:

Perhaps we can comfort and console one another by creating our own acronym for LOCKDOWN.

C-ourtesy and civility is a must.

K-indle the flame of faith.

D-ip deeply into your Resilience Bag.

N-ourish and nurture one another (stay in touch).

And above all remember: It is noble to be global. We’re all in this together (WAITT). Amen!”

We live in strange, tumultuous and unprecedented times. And, with that can come doom, gloom and pessimism. For White, serving as an antidote to the daily barrage of negative news and messaging is doing what comes naturally.

“While being marooned and cocooned we’re being pruned and fine-tuned,’’ White said recently by phone. “Seeds germinating as we wait in HOPE: (H-ang O-n P-eople E-verywhere) for the end of the pandemic and a new chapter of our life to begin.’’

White, 86, is the founder and cheerleader of Joygerms Unlimited. The organization, which has 185,000 members worldwide, celebrated the 40th anniversary of National Joygerm Day on Jan. 8 — socially distanced, of course. White said she was “overwhelmed and exhilarated by the nonstop congratulatory greetings’’ of the day and that snail mail, email and phone calls “evoked tiers of joy.’’

She was especially cheered by the Joygerm video a teacher at Woodland Elementary School (East Syracuse) put together and presented to students and staff, which resulted in 275 new members of the “Joygerm Generation.’’

Joygerms is a one-woman operation, essentially, and always has been. It got its start in 1981, when White read a front-page story in “The Post-Standard” about a West Coast couple who got paid to worry about other people’s problems at tax time. She responded to what she saw as a negative with an upbeat letter to the editor, which laid the groundwork for an infectious movement.

Her mission: Spread joy, and for free — it’s contagious. Form a club with no dues — just “do.’’ Smile. Be kind and courteous. Have an attitude of gratitude. Believe in the worth of mirth and merriment. Convert a curmudgeon.

Joygerms was born and before long White was mailing membership cards all over the country, working with a graphic artist to develop a logo, sending out newsletters, recruiting a mascot and hosting events, including the annual July Joygerm Jubilee, a parade in downtown Syracuse (and later on James Street in Eastwood).

“It started out slowly,’’ White recalled. “I had no game plan. It just mushroomed and took on a life of its own. Looking back, I’m amazed and on the other hand I’m not surprised.’’

White grew up in Syracuse and graduated from the former North High School. She spent four years as a secretary at a local real estate firm, absorbing as much as she could from its sales team. She then landed a pivotal position, working for the legendary advertising executive James “Bud” Coolican at Coolican Advertising. Coolican, among other things, is credited with creating the ear-catching radio jingle for Byrne Dairy (“Byrne Dairy milk is mighty fine’’). “I was just elated,’’ White said of her time there. “I just could not have been happier.’’

Coolican died in 1970 and White decided to forge ahead on her own in advertising and public relations. Long before people used words like “solopreneur,’’ she founded Joan of Art, a one-woman agency, which she operated for many years. At one time, her clients included the Shrine Circus and the Ice Capades.

White is turning 87 in April and likes to say she is “refired’’ rather than retired and encourages others to do the same. “When you stop working, you are not retired,’’ she said. “You are refired and you are inspired and able to do what you have long desired.’’ (She’s a fan of rhymes, in case you hadn’t noticed.)

White lives in the Sedgwick neighborhood of Syracuse in the home she shared with her sister, Beverly, (“Bacteria Bev’’) for many years before her death in 2016. She said she is not immune to feeling isolated and discouraged, at times. To stay positive in the time of COVID-19, she connects regularly with friends, neighbors and fellow Joygerms.

She reads the newspaper but tends to avoid TV and the 24-hour news cycle. She starts each day with a cup of coffee, a grateful heart and an hour or more of quiet time, during which she reads, meditates and prays, letting things go and opening what she calls a conversation between God and herself.