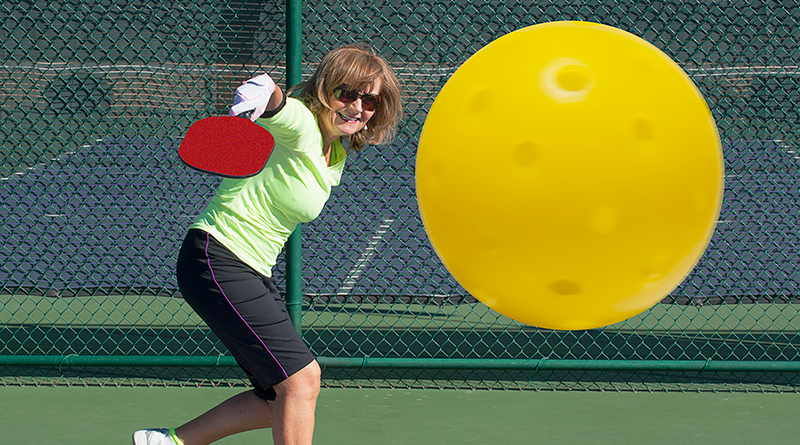 New sport has found some avid advocates in CNY — with no shortage of places to play.

Pickleball is a paddle sport that is a combination of badminton, tennis and table tennis, according to Wikipedia.

But according to a group of players gathered at the Lysander Town Park one recent Friday morning, it’s just fun.

Steven and Karen Pfanenstiel, aged 63 and 62 respectively, have been playing for about three years. But up until then, they really had no idea what the game was.

The Baldwinsville couple had traveled to North Carolina several years ago and stopped at a YMCA there.

“They were playing pickleball,” Steven said.

“Pickleball. What the heck is that? They invited us to play. When we came back up here and the [Northwest] Y opened, they advertised they had pickleball. So we went on a whim, and the rest is history,” he said.

They became so taken with the sport, the Pfanenstiels approached the Northwest YMCA in Baldwinsville several years ago about running Pickleball 101 training sessions during the winter and spring months.

The attendance at those sessions over the past two years underscores the sport’s popularity. In their first year, 2017, they had 16 participants; last winter, that number more than tripled, with 52 people.

They are planning another round of training at the Y in 2019 on the first and third Friday of the month, from January through April, but it is limited to Y members only.

According to the USA Pickleball Association, there were 2.5 million people playing pickleball in 2015, and the organization expected that number to climb to 8 million by this year.

It’s very popular among the senior set due in part to its easy-to-play nature.

The sport is a little bit less impact than tennis, Karen said, and the players don’t move around as much. Also, the court is much smaller than a tennis court.

“But you can make it as intense as you want. Or as laid back as you want it,” she said.

While the equipment is different from the one used in tennis — the courts are smaller, the nets at the center are lower and the serves in pickleball are underhand — there are some similarities between this sport and tennis. It can be played by either two or four players, and scoring is like tennis, in that the serving side wins a point whenever the opposing side fails to return the shot.

Elton Garvin, 61, of Baldwinsville, said his wife, Kate, got him interested about a year ago. Like the Pfanenstiels, he finds the game fun and challenging, but one in which anyone can take part in.

“It’s a question of eye-hand coordination. That’s something that can be taught. It’s like playing an instrument. You don’t get better unless you practice,” he said.

Facing off on the court against the Garvins that morning in Lysander was Jan Cary, 58, who’s been playing for 22 years, starting during a visit to his brother’s in Seattle. He didn’t know that pickleball had taken hold here in Central New York until about five years ago.

Cary enjoys the friendship of his fellow pickleballers and the exercise.

“A lot of different people can do it, you don’t have to be in athletic shape and there are different levels of competition. If you’re playing at the same level, it’s really a lot of fun,” Cary said.

The game started not too far from where Cary first started playing the game — Bainbridge Island, Wash. — about an hour’s ferry ride from Seattle.

It was 1965, and then-Washington State congressman Joel Pritchard and businessman Bill Bell were returning to Pritchard’s home on Bainbridge Island following a game of golf.

They found their families sitting around with nothing to do. With an old badminton court on the property, but no full sets of badminton rackets, the two improvised, using ping-pong paddles and a perforated plastic ball.

Once they learned the ball bounced well off the asphalt surface, they lowered the net on the old court to 36 inches. The following weekend, they introduced friend Barney MacCallum to the game, and soon afterward the three came up with rules, relying a lot on badminton.

There are two different stories as to how the name came about. Pritchard’s wife, Joan, said she started calling the game “pickleball” because, as she put it, “’the combination of different sports reminded me of the pickle boat in crew where oarsmen were chosen from the leftovers of other boats.’”

According to the second story, it was named after the Pritchards’ dog, Pickles, but Joan has said their dog didn’t come along until about two years after they started the game.

Regardless of how it got its name, the sport has found some avid advocates in CNY and no shortage of places to play.

There are a number of facilities in the CNY area with pickleball courts both indoors and out, so there are opportunities to play year-round. For example, Lysander Town Park has two dedicated pickleball courts, and has lined its outdoor tennis courts with yellow markings to delineate the pickleball court’s boundaries.

The Syracuse Parks and Recreation’s Magnarelli Center has courts and an active group of players.  The Cicero Family Sports Center, the Northwest Y and the East Side Y in Fayetteville have courts as well.

For those interested in getting started, visit the USA Pickleball Association’s website at usapa.org.  There is a tab labeled “Ambassadors” that will locate nearby players with a link to their email, and they can help new players.

Steven Pfanenstiel is one of those ambassadors.

For those looking for courts, click on the “Places 2 Play” tab at usapa.org and type in the state name. This feature will also enable those players who might be traveling to take their game on the road.