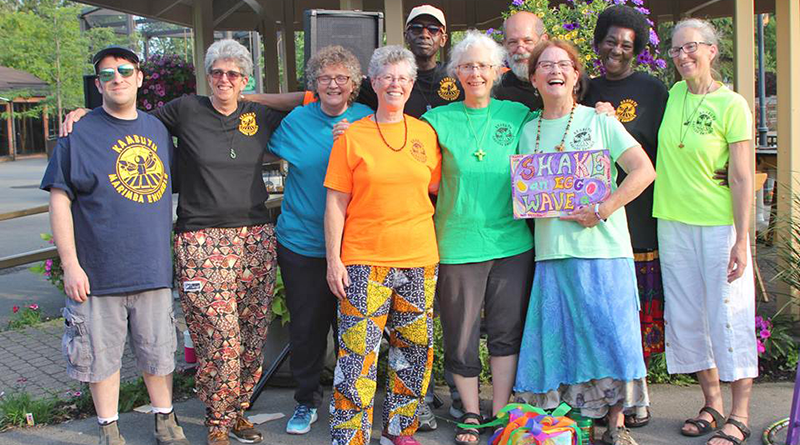 One of the first things you notice when you see the Kambuyu Marimba Ensemble is the teamwork.

Between tunes, the musicians swiftly switch off between seven homemade marimbas of varying tones, from bass to soprano, producing an eminently danceable picnic of polyphony spiced with a hint of pitch. After each number — like well-coordinated square dancers — the players each step briskly to their new position ready to hammer out the next number.

“We change marimbas with every song,” explains Diana Green, who has been a member of the ensemble for 12 years. “I play all of them.”
No wonder the ambitious amateur musicians work so well together. Most of them got to know each other playing Syracuse City Rec League softball, most recently for the Gannon’s Ice Cream team.

Audiences also notice that most of the musicians are women of retirement age. “We’re ultra-sensitive that we’re a bunch of older white ladies playing traditional Zimbabwean music,” says Carolyn Stafford, an original Kambuyu member who hosts rehearsals at her home near Webster Pond in Syracuse. Stafford also oversees the band’s business affairs and website — kambuyumarimbas.com.

“And we have a pot-luck meal at every rehearsal,” she said. “Everyone brings a little something.” The ensemble — the first authentic traditional marimba band to form on the east coast — is clearly more than just a band; it’s a community.

Ad in the paper

The Kambuyu Marimba Ensemble first formed 13 years ago in Syracuse, under the direction of composer-musician Stan Sitnik who had become an important part of the Zimbabwean music renaissance that blossomed in the early 1990s in the Northwestern United States. Sitnik had been a student of Dumisani Abraham Maraire — also known as Dumi — the dynamic Zimbabwean musician who introduced marimba music to the Pacific Northwest.

Composing in his native language, Shona, Dumi specialized in marimba music — singing, dancing and drumming. He taught at the Evergreen State College in Olympia, Wash., in the 1970s and had plenty of private students. He also organized several marimba bands that played throughout the Northwest and British Columbia.

Just as the Zimbabwean music craze has Dumi as its patron saint, the Kambuyu Marimba Ensemble has one of its own.

Martha Jenks, who taught at Fowler High School for more than two decades, was a lifelong musician who picked guitar and mandolin for groups such as the Tired Hands String Band, the Usual Suspects and the Near Mrs.

On her 50th birthday in 2001, Jenks received a tiny orchestral marimba as a gift. “It was like one-and-a-half octaves, with those black-and-white keys,” remembers her sister, Carolyn Stafford.

As chance would have it, Stan Sitnik had returned to his native Central New York in 2003 to care for his ailing mother, and he missed the marimba scene he’d discovered out west, so he placed an advertisement in a local newspaper seeking musicians interested in African music. Jenks read that ad and responded.

“It sounded pretty wacky,” Stafford recalls. “But several of us went to try it out.” Playing Sitnik’s instruments, the ladies were initially unable to perform full songs. “We’d just play parts,” Stafford says. “It was a little disorganized, but Stan would teach us different parts every week. And we’d play that one thing over and over and over again.”

Stafford remembers how Sitnik helped shape the ensemble using tough love. “He really drilled it into us, the respect that we needed to bring to the music,” she said. “He questioned our seriousness every day. He was always asking us, ‘Are you on the bus?’”

And Sitnik didn’t shy away from a bit of friendly arm-twisting. After introducing the ensemble to the music by allowing them to play his own instruments, “he took away the instruments one by one,” Stafford said. “He said, ‘I’m not going to teach you anymore unless you build your own instruments.’”

So the musicians went to work, using various tonal woods for the keys. Jenks built a soprano marimba, which plays the lead. She and Stafford collaborated on the bass instrument, featuring especially sonorous black cherry wood. And Diane Emord built most of the other marimbas, bought tropical padauk wood planks from Paul Anthony’s local lumber yard, Memphis Hardwood, and purchased Congolese wenge wood from a Schenectady firm. Wenge wood is used for tenor marimbas while the baritone was fitted with Honduran mahogany by Deborah Rose and her son Brendan.

The marimba is a percussion instrument consisting of a set of wooden bars struck with mallets. The Syracuse group built its marimbas using various tonal woods for the keys and fashioning resonators from PVC pipe cut to length, tuned and sealed beneath the bars to amplify their sound. Pieces of cellophane were placed over small holes in the tubes to create a unique voice-like buzz.

The wooden bars of a chromatic marimba are arranged like the keys of a piano, with groups of two and three accidentals raised vertically, overlapping the natural bars to aid the musician both visually and physically. Marimbas have more resonant and lower-pitched tones than the xylophone or glockenspiel.

Once they’d constructed their own instruments, the musicians rehearsed regularly and made one of their initial public appearances in June 2005, at the annual Boxing Hall of Fame parade in Canastota.

“I remember we played the tune ‘Zomba’ over and over again as we were driven down the street in a flatbed truck,” said tenor player Diana Green.

Suffering a musicians’ Murphy’s Law, the ensemble dealt with an unexpected technical glitch — elastic cord holding the keys in place got frayed and broke on one of the marimbas.

It was a nerve-wracking experience compounded by the fact that the musicians were performing on a moving vehicle. “Nobody wants to do that again,” noted member Betsy Edinger. While the musicians struggled on the flatbed, however, the crowds flanking the parade were delighted by the marimbas’ insistent rhythms and mellow wooden tones.

Then in 2007, the ensemble traveled cross-country to participate in the Zimbabwean Music Fest in Olympia, Wash. The festival performances represented a real achievement for the Syracuse musicians, as they were welcomed to the Great Northwest with open arms.

Two short years later, however, they suffered a blow when Martha Jenks succumbed to a fatal stroke in April 2009 at age 58. “Martha inspired all of us,” said Diana Green. Jenks wrote three tunes in the traditional Shona style and structure, and two of those tunes — “Mira” and “Crow” — are still performed by the ensemble today

Just as many song titles are in Shona, the word marimba itself means “song made by hitting planks” while the word kambuyu means “insects.” Stafford explains, “The knobbed mallets used to strike the marimbas remind us of insect antennae.” Especially when they’re moving like lightning, bouncing off the deep-toned wood.

Before every performance the ensemble huddles together for what they call the “bug hug,” during which they remind themselves of their love for the music and their love for one another.

Nolan has been singing in church for more than 60 years, and she continues that lifelong avocation with a trio named ASV on Fire for God. But for the Kambuyu Ensemble, she had to learn to sing in Shona instead of English.

“It was a challenge,” she said.

“But Vicky captures the spirit,” said Betsy Edinger. Nolan just celebrated her 70th birthday in August with a party at which the ensemble entertained.

Heard has been playing African-style percussion for 30 years with such artists as jazz saxophonist Jesse Collins, and taught an after-school program for the Syracuse City School District.

Although mostly retired now from their day jobs, the musicians include three teachers, two nurses, two human-services providers, one scientist and a visual artist. Their ages range from 62 to 70, except for Ethan Jenks who is in his 30s.

Carolyn Stafford insists that the musicians are painfully aware that purists could complain that they’ve taken liberties with a longstanding Zimbabwean tradition. “We’re very concerned about cultural appropriation,” she said. “So we make an effort to bring the level of respect that this music deserves.”

Betsy Edinger, who has been with the group for two years, agrees. “We bring a sensitivity to the culture and to how the music is to be played,” she said. “We respect that and want to keep that going and not to westernize it. I look at it as a mission to keep this music alive.”

By rising to the challenges posed by the marimba, Edinger has experienced an existential epiphany. “I don’t have a musical bone in my body,” she said, “but I delved into it to put it mildly — all day, every day — it was a life-changing event for me. It opened up a whole new world.”