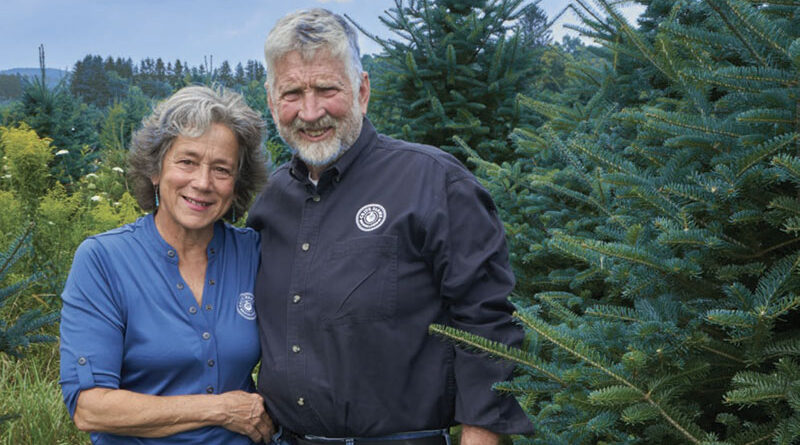 Matthew and Juanita Critz are in the business of harvesting fun for their visitors.

Over the past few decades, they have turned an out-of-use dairy farm in Cazenovia into a destination for guests who travel miles to enjoy its various attractions from March to December.

Whether it’s climbing around on the play equipment; taking a wagon ride; sampling ciders and brews at the tasting room; viewing the cider mill at work, in season; cutting down your own Christmas trees; attending the music events; finding your way through the corn maze; picking pumpkins, apples or blueberries; seeing how maple syrup is made; enjoying some seasonal treats in the café; or browsing through the gift shop — Critz Farms has become a veritable playground for tourists of all ages.

Juanita estimates that in a typical year, they welcome between 50,000 and 60,000 visitors to their farm.

When Matthew bought the farm on Rippleton Road in the 1985, it was approximately 110 to 115 acres. The couple has since purchased other farm parcels near and adjacent to the original farm and today, it’s 350 acres of fun and education for visitors.

Originally, the farm was to be a cut-your-own Christmas tree farm, Juanita said. But it has gone on to become one of the first agritourism farms in the area.

The customers’ enjoyment is their underlying philosophy in running the business.

“Our outlook is family fun, entertainment, and along the way you sell product,” Matthew said.

Juanita added that it’s a “farm experience with an educational focus.” A former elementary special education teacher with the Jamesville-Dewitt School District, she chuckled, “Once an educator, always an educator.”

The roots of the business

A SUNY College of Environmental Science and Forestry graduate, Matthew had been a partner in a Christmas tree farm in Harrisville in the Adirondacks. However, after about six years, he said, the partners had other business ventures in mind, so he moved to Cazenovia, an area he had lived in during his 20s and enjoyed, and he bought the farm.

Matthew started out planting trees, but since the trees need about eight years before they can be harvested, he needed something else to make ends meet. So, he started a contract Christmas tree trimming service.

Christmas trees, he explained, need to be trimmed every year, so he had contracts with different tree farms, some of them in the South and he and his crew would take to the road — all while tending to his own farm.

Some of his customers in Virginia and Delaware convinced him to try agritourism, an idea that hadn’t yet caught on in Upstate New York, but was popular in some of the Southern states.

He took their advice and started with a small pumpkin patch. Today that patch is about 40 acres, producing hundreds of thousands of pounds of the orange gourd. The Critzes, of course, make them available for their customers to pick each fall, but tons are transported to wholesalers in such places as New York City, Long Island and Boston.

Matthew and Juanita Critz, the couple behind the success of Critz Farms, met on a blind date, married five years later and grew the business together, They just celebrated their 25th anniversary in July 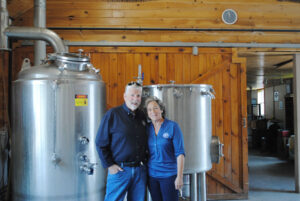 But there was more growing on the farm than crops. There were business opportunities taking root.

Of the families coming to pick their own pumpkins, Juanita said, “They’d come to get their pumpkin and they’d stay and talk with you in the driveway. It began to become clear that they wanted more to do. So that’s when we started little things.”

Their first fall festival event was one weekend in October. Now the Fall Harvest Festival runs seven days a week for seven weeks, from mid-September through to the end of October, although some activities are only offered on the weekends.

In addition to picking their own pumpkins, guests can pick apples and watch cider being made. One of the big attractions of the event is the corn maze, which the Critzes started in 1999. Matthew cuts the maze out early in the growing season, before the corn gets high, and aerials of the corn maze show different themes each year. This year, he said, the maze is of a monster truck.

Asked if anyone ever got lost in the six-acre maze, Matthew chuckled and said, “All the time.” But Juanita was quick to add a hint about finding a way out — just listen for the highway, since the maze is situated along Route 13, across from the main farm.

About a month later, commencing the Friday after Thanksgiving and running until the Sunday before Christmas, the Critzes host their holiday program, where families can cut down their own Christmas tree or choose one pre-cut at the gift shop; adults can take the chill off with a stop at the tasting room.

In March, it’s maple syrup time, and during the Maple Syrup Celebration, tourists can enjoy a pancake breakfast, take wagon rides, into woods, learn how sap is gathered, return to main farm area to watch the sap being processed and then get a taste of the syrup.

Following that, it’s the Apple Blossom Festival in May.

The Critzes have added a new event to their summer calendar, with a large bonfire marking the Summer Solstice. This is a Scandinavian tradition, which celebrates light triumphing over darkness. But, their biggest summer event is the Blueberry Jam, with bands, food trucks, kids’ activities during the day, blueberry picking, blueberry cider, blueberry beer and blueberry fritters.

The ever-changing nature of their business appeals to the couple’s personalities. Matthew said his favorite part depends on the season.

When “we’re in the middle of pumpkins, I really like pumpkins. I’m a very seasonal person. I like the rhythm of the seasons. I like the rhythm of changing what we’re doing all the time. My favorite season is the one I’m in,” he said. “I think that a lot of people that are in business for themselves build their business around their personality. The idea of shifting seasons and doing this and this fits my personality well. I couldn’t do maple 365 days a year. You get tired of it.”

And there were a lot of changes, especially in the mid-2000s, for both the couple and the business.

At the same time they were running Critz Farms, Juanita was still teaching and Matthew was involved in commercial landscaping work off the farm, which involved all the Cracker Barrels here in the Northeast and jobs around New York City and the Catskills, he said.

Because of the demands of their business, Juanita resigned from teaching in 2010 and Matthew cut back on the traveling and they began developing their hard cider operation, which started in 2011.

Shortly after starting with the cider, people were asking about beer, Juanita said. They were allowed to have some guest taps with some New York state beers. Once they found out how popular they were, they got their farm brewery license in 2015.

Juanita joked that after leaving education, she was worried that there might not be enough “intellectual stimulation,” she said. “All of a sudden, I had to learn everything about all the federal and state laws about alcohol and I got plenty of stimulation,” Juanita said.

Those laws and other regulations and permits required for all the different facets of the business, overseeing a staff that could number as many as 65 people on a busy Saturday, the production of cider and beers, and the logistics of the events they host are only part of the Critzes’ work.

Those crops need tending to. Working through a federal Department of Labor program, the couple is able to have a crew from Jamaica work from April to December to help prune, fertilize, herbicide and harvest the crops. They pick and load the pumpkins that are sold wholesale. Matthew estimated that each season, that amounts to about 15 tractor-trailer loads of pumpkins with approximately 50,000 pounds of pumpkins in a trailer load. In addition, there are about 50 acres of Christmas trees, with 1,000 trees per acre.

During January and February, the couple enjoys some traveling and take in some of their favorite outdoor activities, like hiking and skiing.

“We subscribe to the work hard, play hard philosophy and try to reward ourselves with travel and recreational activities during the down time,” Juanita noted.

Matthew and Juanita celebrated their 25th wedding anniversary in July. They met on a blind date in 1991, arranged by Juanita’s then-childcare provider, and married five years later. At that time, Juanita was a single mother of two boys, living in Cazenovia and teaching. Matthew has a daughter from a previous marriage, so theirs is a blended family.

The three kids all worked on the farm when they were younger, but the two oldest, Jessica and James, have chosen different career paths in Colorado and Manhattan, respectively.

Their youngest, Patrick Allen, is the farm manager and is being groomed to take over the farm, allowing Matthew, 69, and Juanita, 63, the chance to take four-day weekends every so often.

After more than three decades producing crops and fun for so many, what keeps them going?

“We know and love the work. We love growing food and other crops. We enjoy sharing our slice of paradise with the public and appreciate that we are making a contribution to the community,” Juanita explained.

According to the website, since it’s a farm, activities and hours can change, depending on the season. Some attractions are only offered on weekends. There is an admission fee during the Fall Harvest Celebration and for ticketed music events, such as the Blueberry Jam and barn parties. Otherwise, there is no admission fee to the farm.

Critz Farms is the perfect place to enjoy the wonderful autumn season in Central New York. Pick your own apples or pumpkins, and take part in their Fall Harvest Celebration until the end of October! The apples from their orchard also get turned into cider that you can enjoy from their spacious Tasting Room while you visit!

For the most up-to-date hours, and to see what other events are on offer, visit their website at
www.critzfarms.com