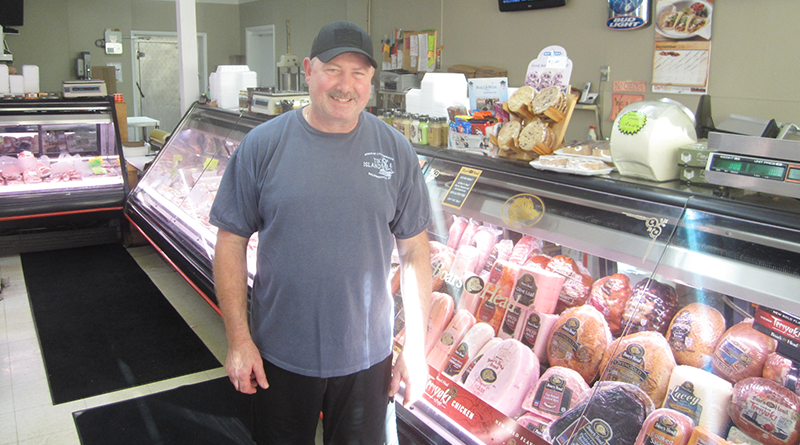 Since 1984 Frank Mazzye Jr. and his family have been cutting and selling meats to the many loyal customers at their Liverpool location on 7252 Oswego Road.

Specialty meat shops aren’t too common anymore, having been long eclipsed by supermarkets with multiple departments, but Mazzye’s Meats has hung in there and become an area staple.

By 1951 Frank Mazzye Sr. was a master meat cutter and taught others the trade of butchering. Eventually Frank Jr. and others in the Mazzye clan learned the ropes, too.

“We all worked for the grocery stores, way back when, in the ‘70s,” said 62-year-old Frank Mazzye Jr. “We worked for Acme Markets. Then they went out when P&C went out. We bought out [another] established meat store. They were retiring down in Galeville. Me and my father and my mother started down there in 1978.”

In all those decades the Mazzyes have kept to the basics of their work, offering high-end meats, sandwiches, salads and other offerings. They do it with a personal style that helps keep them stay in touch with their customers.

“I think customer service is probably the first thing,” Mazzye Jr. said. “People can come in here and talk to the owner face to face. Our business increases every year so we must be doing something right. We know customers by their first names when they come in so they feel comfortable. A lot of it is word of mouth. We don’t really do a lot of advertising.”

There is work involved, and the Mazzye’s haven’t shirked from it. Staffers, including Mazzye Jr., often come in at 7 a.m. and don’t leave the store until 6 p.m.

“I mix it up,” Mazzye Jr. said.  “If it’s busy I’m over here working with these guys at the counter. If it’s not busy I’ll go back and ring out checks. I’m always busy doing something.”

He blamed the lack of other freestanding meat markets and specialty shops today on the changes in the work ethic.

“Because nobody wants to work — [especially] the young generation,” he said “They want to sit at a desk and work 9 a.m. to 3 o’clock.”

He has steered clear from the possibility of expanding or duplicating the shop in other areas. The dangers of doing that were made apparent to him when the Village Sub Shop in Liverpool failed, and Liehs & Steigerwald’s, another specialty meat business with two locations in Onondaga County, had to close its Clay location in the summer.

“I see too many places that open up another place and they go under,” he said. “You see a lot of that. It’s just too much. You’re going to lose customers who go to your new place. You’re going to stretch yourself into two places if you don’t do any more business. You’ve got two overheads now. ”

The Mazzyes also have a deck-building business along with doing some snow plowing in the winter. That works out for them because things tend to quiet down in February and March. Mazzye Jr. believes that’s because shoppers don’t want to make a separate stop at the specialty store in bad weather, when they can get all their items from the supermarket and stay inside.

The slow period works for him because he is an avid snowmobiler in his free time. He likes to go north up to the Tug Hill Plateau and hit the trails.

“We start up maybe in Redfield or Parish and go up to Barnes Corners,” he said. “It’s nice. I like being outside. You’re not talking to anyone. You’re away from everything. You’re inside your helmet.”

He said the shop will likely change hands in a half a dozen years or so, which is when he expects to retire. None of his three children are interested in picking it up at this point as they have gone into different fields.

Until then he is right where he wants to be.