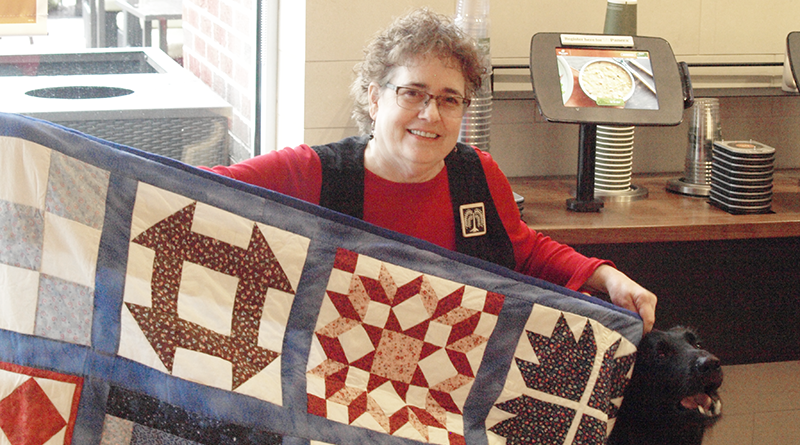 Laurie Leonard of Syracuse developed her passion for quilts later in life. Now, she can’t stop doing it

Laurie Leonard is a Syracuse resident who has been putting needle and thread together for the love of quilts for two decades. The 59-year-old has been sewing, however, since she was 8.

“I like the creativity of it,” she said. “I like the art of it. I’m not really a painter or a drawer or anything like that. I never felt that I really was talented that way. I really like fabric. I like the tactile feel of fabric — the touching of cloth. Working with fabric really speaks to my soul.”

It wasn’t long before the young Leonard was sitting down at a sewing machine and outshining those around her. She found it came naturally to her.

“When I learned how to sew I soon became better than my mother,” she said. “I was better than the home early childhood teacher in eighth grade. I recognized that I could sew better than her.”

Although she loved to sew, it wasn’t until well into adulthood that Leonard began her passion for quilts. She joined the Sankofa Piecemakers Quilting Group at Beauchamp Library. Its members meet at the library on Syracuse’s south side each Saturday morning.

“Sankofa is an African symbol,” she said. “There are two symbols. One is a bird and she is looking back with an egg in her mouth. And one kind of looks like a heart. It’s symbolic that in order to learn for the future, you have to learn from the past.

“It’s a racially-mixed quilting group. Not everybody quilts. Most people quilt. Some sew. You don’t find that too often, where there’s a racial mixture. We probably have 15 to 20 key people who come most of the time. Then we have some that don’t come too often.”

The group is accepting more members, but they need to know how to sew to become a member. Sankofa doesn’t teach beginners.

A quilt is actually three layers of material. The back, the middle — which is a batting material — and the cloth front. When she does teach quilting to others, Leonard says she’ll often light-heartedly explain that a quilt is like a bologna sandwich.

There are two types of quilting that she does. One is patchwork quilting. That is the traditional method of quilting, piece by piece, like our grandmother might have done and many still do. The other are art quilts. These tend to be non-symmetrical. They might have symbols on them or even pictures. They can even use a fusion technique to add imagery, which doesn’t require sewing.

Leonard mostly does art quilts now. She got involved with them as the quilter for the Michigan Women’s Music Festival for 11 years.

“It was in Hart, Michigan,” she said. “It was a festival for 40 years. It ended two years ago. Now there are other offshoots of it. I had a friend who worked there and she kept saying ‘You have to go. You have to go.’ Finally my partner and I said ‘OK, we’ll go.’ We did. It was an amazing community.”

The Syracuse resident enjoyed her time being in charge of the quilt aspect of the festival.

“I was the quilter and what I would do is I would make the quilt for the festival, take it and put it on a frame while we were there,” she said. “Then the women could come and embellish it however they wanted to. Then we would take it off the frame and it would be the big raffle prize.”

Leonard sees quilting as an expression of feminism. She is not the only one. The University of Michigan plans to digitally archive the quilts that have been done for the festival before it closed, so they can be studied, Leonard said.

Leonard never sells her quilts. She is always giving them away to friends and family, even though she said a good quilt can sell for as much as several hundred to thousands of dollars. She does it for the love of creating something with her own hands, not for income.

She said she has done maybe 50 quilts over the years and plans for more in the future. The Art Rage Gallery will be exhibiting her work in September. She is making a quilt just for the show.

“I’m doing a piece for an exhibition of ArtRage,” she said. “It’s called Seen and Heard commemorating the 100th anniversary of women’s suffrage.” That show will be in ArtRage Gallery in Syracuse in September, she said.

Leonard encourages any one to give quilting a try. She said almost anyone can do it. Her 6-year-old granddaughter is a quilter.

But more generally, Leonard encourages everyone to take up some form of creative expression. All art is beautiful, she believes.

“I’d like to encourage people to be creative whatever their muse is…fabric, paint, string. Created things bring joy to people and we often don’t take time enough to play. Whatever that might be, take time to play, hopefully every day. Don’t ever think that what you make isn’t good enough. It’s beautiful. Whatever art you make is beautiful. Just keep at it.”