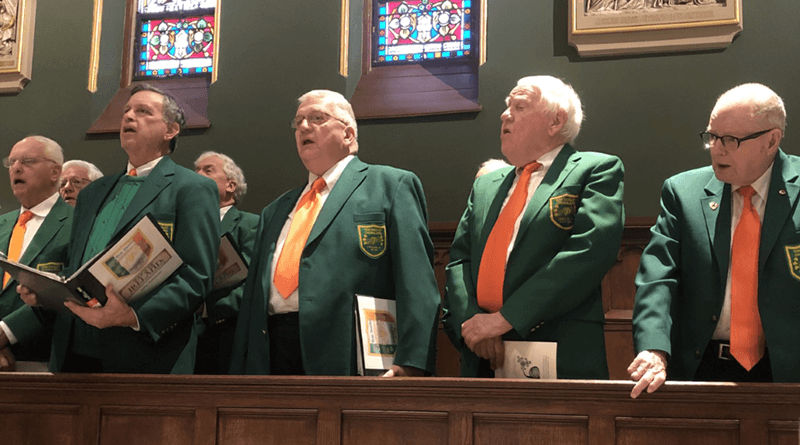 Dressed in their iconic green jackets, white shirts and orange ties — the colors of the flag of Ireland — the members of the Dr. Tom Dooley Choraliers will take the stage once again at Clinton Square in downtown Syracuse on Saturday morning, Sept. 7, as part of the Mass that is celebrated during the Syracuse Irish Festival. Both the Mass, and the Choraliers’ participation in it, has been a time-honored tradition.

While the Choraliers have not performed at every festival, which marks its 25th anniversary this year, they have been in most of them.

That they have played a role in the Irish Festival is certainly fitting. The group was formed in 1962 as a means to promote Irish culture and song, according to Bill Dougherty, who’s been a member for about 10 years. Audiences perhaps are more accustomed to seeing the Choraliers at the St. Patrick’s Parade and its Mass in March, or on TV ads for Dunk & Bright Furniture that air during that same month.

But they are popular year-round, with a repertoire that includes both Irish and Americana songs. Last year, for example, they had about 40 performances, including those at nursing homes, senior care facilities, weddings, funerals, and hooleys, which is an Irish party with music. And they’ve even taken the national and international stages, having performed during the Reagan years at yhe White House and in Canada for Pope John Paul II.

Under the direction of Lisa Ellis, the men’s choral group numbers about 25. The members range in age from their 30s to 90, with most of them in the 55-plus age bracket.

Jack Mulholland, who turned 90 in June, cited that friendship and his ability to continue singing as reasons why he’s been with the Choraliers since the beginning. Raised in Syracuse’s Tipperary Hill, he was a member of St. Patrick’s choir and had been an altar boy there. He was able to continue his love of music when he joined the Choraliers.

“They say that music is praying, and I need all the prayers I can get,” he said, with a smile.

Members say it’s their love of singing and the camaraderie within the group that has kept it going to more than half a century. Listening to the guys in the group for any length of time, it’s evident, too, that that camaraderie is infused with a lot of wit and self-deprecating humor.

Even though the choral group promotes the Irish culture, its members represent a variety of nationalities. For example, there are members of Polish, African-American and Italian descent. Ironically, its founder and long-time music director, Mike Pinkasewicz, who led the group for more than 40 years, was Ukrainian-American.

The group is named for Dr. Tom Dooley, an American doctor who spent years in Southeast Asia and died in 1961, one day after his 34th birthday, of melanoma. He was popular in the United States in the late 1950s and early ‘60s, was celebrated for his humanitarian efforts, and then-President John F. Kennedy honored him posthumously with a Medal of Freedom. It was in recognition of his good deeds that the group decided to take on his name, Dougherty said.

The Choraliers have released two CDs. Those interested in obtaining them can message the group through its Facebook page.

The group invites any man of any nationality who enjoys music, comradeship and singing to join the Choraliers. They rehearse from 7 to 8:30 p.m. on Wednesday at the Camillus Town Hall.

Anyone interested can reach out to Dan Doherty via email — dldoherty71@gmail.com.